The time has come... 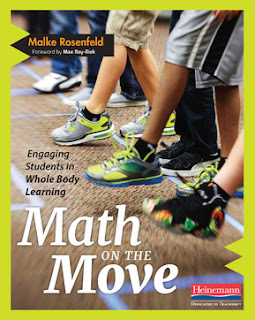 My new book, Math on the Move: Engaging Students in Whole Body Learning is ready for preorder! Find out more here.

I missed having a blog, so I made another!! You can find me here.

More info on my other spaces below. Cheers.

The time has come to say goodbye...to this blog. In the last month not only was my first book published but I also handed in a 70,000 word manuscript to Heinemann which will be transformed into a book with an online video companion by fall.

I'll also be developing a new blog and Facebook group to support educators as they read about and implement the ideas presented in my book about moving math in the elementary classroom. (And I'll provide links as soon as they become available.)

My new book on the math of making comparisons! [#SocksPants] 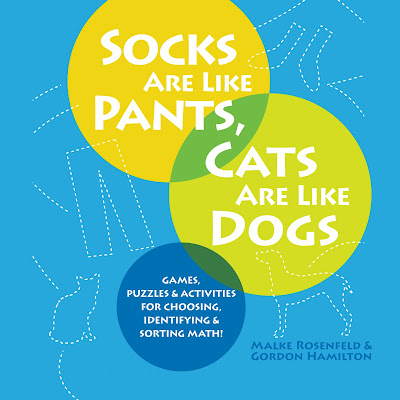 Do you want your students and children to feel like algebra is beautiful, playful, and intuitive? Come play, solve and make math with us!

Our new book is filled with a diverse collection of math games, puzzles, and activities exploring the mathematics of choosing, identifying and sorting. Teachers and parents have tested all activities in classrooms and living rooms. The activities are easy to start and require little preparation. 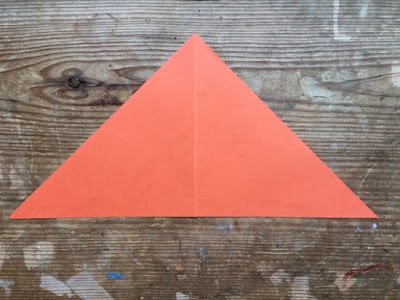 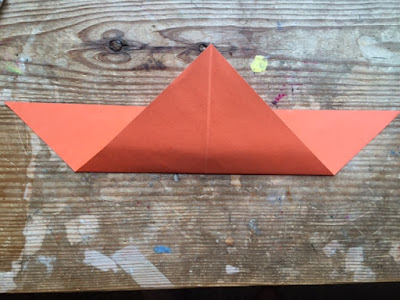 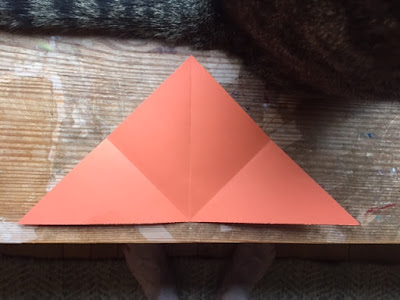 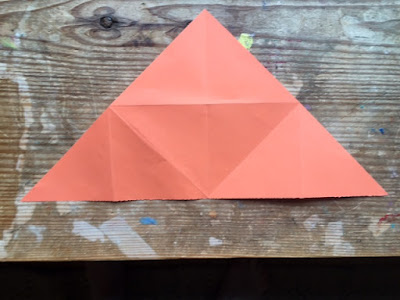 And, I'm rethinking my lesson for tomorrow. I'll focus on the language of "middle" or "center" and use rectangular and triangular paper. But "half"?  Half I'll save for another time.
Posted by Malke at 5:43 PM 13 comments:

Today's work was to make a four-beat Pattern A. I structure each day/"lesson" as an activity progression with planned pauses to discuss certain key points of the math/dance making.  Today I recorded two similar moments, in two different classes, in the process of making Pattern A. When I transcribed the conversations this afternoon what struck me was how differently they unfolded.

LESSON SUMMARY: My goal on the second day of my residency is to end the class with every team having a Pattern A they can dance the same way with their partner. We do this by watching individual teams demonstrate their patterns and then talking about what we see/notice about the pattern. This ideally means talking about the pattern properties that reside within the three different categories that build our patterns (movement, foot position and direction). Yesterday's notices made me think that the categories made sense to most kids. At the beginning of each class today we reviewed "what do we use to make our patterns" but when we started looking at the Pattern As I realized that though both groups were making nice patterns, both groups still didn't quite "get" what they were looking at in others' work.

The first story illustrates what it looks/feels like to work with a class that has a sense of what dancing "the same" might mean but is very far away from saying exactly what is the same (maybe the equivalent to van Hiele Level 1?)

The second story illustrates a class that is still learning how to interact with the movement variables but has what seems like a more flexible understanding the relationship between the categories and the properties within those categories (van Hiele Level 1.5?)

NOTE: In the two stories below my words are italicized, and the kids' responses are bolded. In both conversations many children contributed, I just haven't specifically noted change of speaker here.

CLASS #1: Swimming Upstream
Let’s say what we noticed about that pattern (that the demo team just danced).  Kid:They’re both doing the same thing and they’re not off beat.


Okay, so by “same” do you mean same tempo? Did you mean same in any other way? (To class): [First kid] was seeing same in the tempo, the same speed. What else did you notice about their pattern? Let’s watch it again. That they’ve got a really good rhythm, like how they do it.

So we’ve talked about the tempo. What else did you notice? That they were doing it together they weren’t like one person wasn’t doing different things they were all together.

Okay, so “all together”  What does it mean? People were saying they were dancing together. So what does it mean to be "all together"? What words will help us describe a pattern that is "all together"? What kinds of things can we identify?  [Kids start picking words kinda randomly from our word board] Ooh! Symmetry. Interesting. But what have we been talking about how the patterns have been made? What kinds of things are we using to build our patterns that we could also use to say if a pattern was being danced the same or not?

Ummm. Transform? No…we haven’t actually talked about that yet. Reflect or…

You know, I've been spending most of my time when I’m up at the front of the classroom, near these posters.  This is the information that I’d like you to think about. What kind of words on these posters might help you describe these patterns? [Long pause] Movements?

Yeah! [talking to the demo team] Did you guys do mostly jumps? Were the jumps the same on every beat.?[bringing the demo team back up to the ] Let’s say jump for each beat while they dance…Now there was another movement in there.  Look up at the list. The category of movement has a lot of movement words. Turn?

So let’s see their second beat. Ready, go. What are their feet doing now? Split. Where’s their third beat? Split.

Good! You’re staying in this category of foot position…And where’s the fourth beat? Split! Did they do 4 splits?  My goodness. Let’s watch this pattern one more time and let’s talk about their direction.  So their beat zero is where? Center.  So first beat the direction is what? Diagonal.

Thank you! Is it a right diagonal or a left diagonal do you think? Right. Now let’s look at the next direction. They went to the…side.

The right side!  And now the third direction? It looks like they went to a different kind of side with their feet to the right and left. Give them a round of applause! So what I’d like you to do right now is go back to your work with your partner and we need to make sure that everyone has the same pattern as their partner. You’re working together.

Tell me more about what you noticed? They really liked corners.

(giggles from all the kids) What else could we be noticing?

Okay before we watch this tell me what else we could be noticing? We noticed their starting position, we noticed that their feet were crossed at one point. What else could we notice? Feet?  Their left. Well, my right.

So right now we’ve been talking about feet? What other CATEGORY could we notice while they’re moving?

Step? They stepped backward? Yeah, but which category is that? Movement?

So let’s look at their movements...impromptu chorus of kid voices: Step, cross…

Well , what category does cross belong to?  Feet.

While we’re looking at the pattern let’s find words that describe what it is we’re seeing? They start with feet together.  Where are they?  Center center.

So if we’re looking at movements let’s see if we can figure that out. Step, step, jump, jump/cross…

We don’t say cross because we’re only looking at one category at a time. But this is challenging, I know that. So let’s say those movement words again. Step step jump jump.

Now let’s look at directions. They start in center and let’s do the first beat and stop. The first beat is where? Back left corner.

And where’s the third beat? Center.

Me trying to talk over them: front, front…just front. Front corners.

So can you see how all three of those would…(to dancers) show us what your feet would look like if they were together in front.  So we would call that a together front. Now show us a split back…and a together back.  Do you see how that works? You need more than one piece of information to describe any one beat.
Posted by Malke at 8:02 PM 13 comments:

Email ThisBlogThis!Share to TwitterShare to FacebookShare to Pinterest
Labels: Math in Your Feet, van Hiele 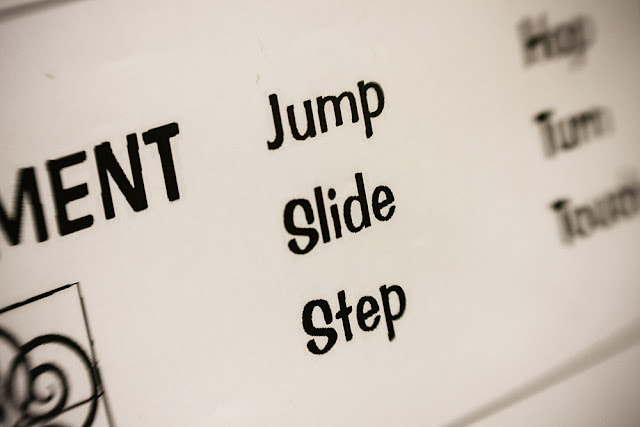 After experimenting with Notice & Wonder last week during a Math in Your Feet residency with three classes of fourth graders I:


This week I'm back at the same school with three more 4th grade classes. Their Notices & Wonders today were really nice but, like last week, fairly general. I'm excited to see if they follow the same course as last week's students in becoming more and more specific, precise and descriptive with their noticings and pattern analysis.

And today I had a new Wonder: What if I bring a few notices and a few wonders forward each day (collected from all three classes) and put them in front of the students. They won't be identified by class or student.  Right now I'm thinking that it won't hurt to try and I'm curious what might happen.  Here are the student responses that I'm choosing to pull forward for tomorrow:
My original three wonders can be found here: INTRO/DAY 1
The rest of last week can be found here and, like I mentioned, document the progression of general noticing to much more specific and precise language: DAY 2 | DAY 3 | DAY 4 | DAY 5
Posted by Malke at 7:28 PM 36 comments: