You Never Know Until You Ask: Notice & Wonder, Day 2 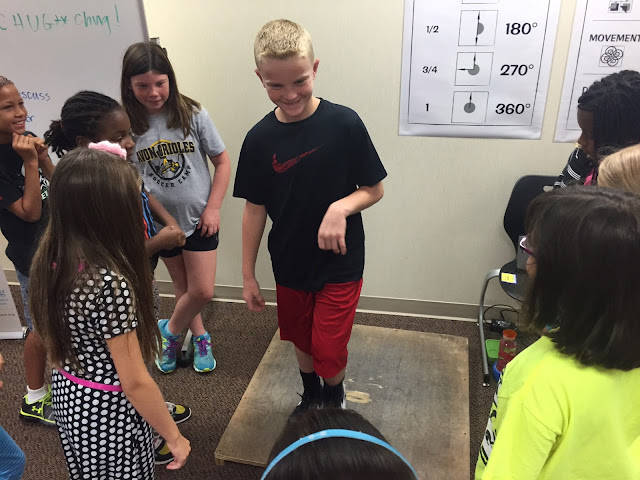 SYNOPSIS
1. I'm engaged in a week-long experiment with Notice & Wonder as a way to help kids in Math in Your Feet reflect on their body based learning and experiences. My Day One post is here if you want to get a sense of what my goals and wonders are.

2. For Day 2 I added a Notice into our observation of the math/dance patterns in progress, which led to increased student engagement and pattern analysis.

3. Make sure to read the Notices and Wonders at the end of this post. They are lovely and philosophical and insightful as to the creative process. They are also interesting evidence of children's processing around turns, degrees of turns, and combinations of turns. Why hello Trigonometry!

EPIPHANY: MORE NOTICE, LESS TELL
Today we started making a four-beat Pattern A. As part of this process I initiated a conversation to help kids focus more closely on the categories of foot position, movement and direction as resources for our pattern building and for noticing the structure of these temporal, moving patterns. Working on Pattern A also requires an emphasis on "sameness" -- making sure both dancers are dancing the same pattern and dancing it the same way.

Part of the work of making a math/dance pattern is about stepping out of the "actor" role (as the one involved in making the pattern) to observe others' work. This kind of stepping back can help you gain insight and perspective on your own work.  Today I tried something new during this observation time and had an epiphany:

Instead of directly guiding conversation by asking "What kind of movement (or direction, or foot position) did they use in that pattern...?" I decided (on a whim, let it be known!) a Notice. After a team of dancers would show us their pattern I would first ask something like: "What did you notice about their pattern?"  For the most part, children in all three classes noticed at least one relevant attribute without me prompting. And, even better, these initial noticings started interesting conversations during which I could contribute/introduce new ideas or observations and deepen the conversations.

The kids were more engaged in these discussions than I've seen before. Ever.


YOU NEVER KNOW UNTIL YOU ASK
Since I only have five days max with any one class, I never have enough time to really figure out exactly what makes each group tick. Imagine having the first week of school over, and over, and over again. But, with the Notice/Wonder (first done in conversation with a friend and then shared out to the whole group) I am getting much more information from these 4th graders about how they're thinking about their work than I ever did before.

Here are their Notice & Wonders from Day 2, but not all of them. I've combined all three classes' responses -- some of them were repeated in each class. Refresher: today's mathematical themes were sameness, problem solving, categories, and identifying attributes/properties as a way to make sense of pattern and structure.

I noticed...
- It was hard for us to do the same thing [move] on the same beats
- It was hard to make a decision on what we should do [while making their pattern]
- It was hard for us to go at the same rate.
- We did good when no one was watching and when people were watching we didn't do it right
- One of us was (crossing our feet) right over left and the other was going left over right
- That sometimes when we did it we'd get confused, or get messed up, and sometimes we had success
- Every group we saw had a pattern with jumps in it
- Every group had a pattern with a split [two feet apart] in it
- Everybody was doing the same dance/pattern as the other partner
- When people started in the middle [of the square]  and they jumped to the front part of the square they usually jumped out of the square so we thought they should start at the bottom part of the square and jump to the top. [Spatial reasoning]
- Every single dance pattern was different [meaning each team had a different pattern]

I wonder...
- Can I clog at home?
- If we can add some more moves
- If you could change a 360 degree turn into 314 degrees or you could choose your number from zero all the way up to 360?
- If we combined all the patterns in the classroom and then see what it looks like
- If you could do a 460 degree turn
- If everyone will remember their dance moves
- If we we'll actually be able to do the dance we made. [Me: So you're not feeling like you can do it right now?] Well...it's tough. We're still working on it. [Me, to class: How many other people feel like they're still working on their pattern, that they don't exactly have it the way they want it? (lots of hands). So, you're not alone. This is part of the process]
- If we're going to learn other people's patterns
- If our pattern will work out? [Is it not working out?] Well it is; we've wondered from the beginning if it would work out. [Okay, what do you think so far? Thumbs up?! Okay!]
- What's the difference between the A & B pattern is [They'll find out tomorrow!]
- Why your body and your mind control the pace you go in...why only you can control your pace.
- How we come up with the things (pattern) we came up with. [Do you have any thoughts about that?]  Well I think it's about how much you're creative and how much you do that thing. Like if you like to turn and that's your favorite thing and you do it all the time you probably would like to add that in to your pattern.

Bonus: 4th grade Teacher Wonder! ...What it would be like to make a math problem out of our turns...if we were adding and subtracting the angles as we turned, what the extent of that math problem would look like.

I can't wait to see what happens tomorrow.
Posted by Unknown at 7:18 PM

Email ThisBlogThis!Share to TwitterShare to FacebookShare to Pinterest
Labels: Math in Your Feet, Notice and Wonder