Spontaneous Math / Math All Around 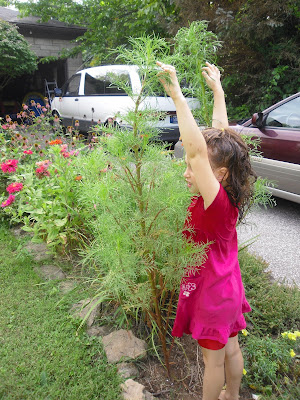 My six year old daughter has many, many questions and observations that can be filed under the catch-all category of 'spontaneous math'.  In fact, most of the math thinking she does exists primarily in the verbal realm and in relation to the moment she's in.  We seem to have some kind of math related conversation every day.

She has been known to enthusiastically break into a chorus of counting to twenty by ones, then to 100 by tens, forward and backward.  She likes chant counting by twos as well.

She has two cosmo flower plants in her garden that she has nurtured from seed.  They have not yet flowered (and it's mid August!) but they have been a daily source of measurement since early summer.  "The cosmo is taller than me!  It's up to Papa's chin now!" she cries as we turn towards autumn.

She agrees to fold a basket of laundry for 50 cents.  She says, "Will you give me fifty more cents if I put it away?"  I say, "No, but I'll give you a dime.  How much is that all together?"  When it comes time for payment, I say, "How many quarters should I give you?  How many pennies is a dime?  How many other ways can you make ten cents using pennies and nickles?"  She starts to put her hard earned 60 cents into her savings jar and then dumps it all out on the counter.  "Let's see if I have enough change to make a dollar so I can exchange it for a dollar bill!"  Only eight cents short.

[A side note: I'm really excited to be having this kind of conversation with my daughter.  I really, really, desperately do not want her to end up like the college student behind the cash register with whom I recently interacted.  She said, "That'll be $3.73."  I gave her a twenty dollar bill.  She rang the cash tendered into the cash register.  In the middle of that I said, "Oh, I have the correct change," and gave her 73 cents.  She looked at the register, looked at the $20.73 in her hand and went to find a cal...cu...la...tor.....]

Back to my daughter...who is curious about how much things cost, and how that compares to other things we buy.  It's a little embarrassing when our neighbor brings her a birthday present and she asks how much they paid for it, but she's there's something she's trying to understand, even though I'm not quite sure what it is.

Over Christmas, she and her Aunt Karen and Uncle Arlen measured the sunroom in a hilarious series of "Arlens".  The sunroom is almost exactly four Arlens long.  Isobel, it turns out, was two Arlens long.  The couch was one Arlen, and five of pet cat Lucy.

We've read Sir Circumference the first Round Table a number of times.  Now she has a game she made up where she leaps towards her blow-up wading pool in what she calls the "diameter jump' -- I hold my breath every time as she leaps, finger tips to toes stretched out in one long line to touch the front and back of the pool at the same time, literally flying, flopping almost on the other side of the pool.

She meets a four-year-old in the grocery store.  She says, "You're four, I'm six.  I'm two years older than you."  Or, a three year old.  "I'm twice your age."  She has a pretty good experienced-based understanding about basic fractions, and has even been known to figure out something via multiplicative reasoning, but these episodes are fleeting, here and gone, hard to keep track of.

She asks, "Who is older, you or Papa?"  When I tell her Papa is 53 she is silent for a minute, looking at her fingers.  Then she exclaims, "In five years he'll be a HUNDRED!"  "No," I respond, "You're counting up by tens.  You need to count by ones."

We took a city bus not long ago.  Got on a block from our house, followed the route south, then north again, to the center of town and out to the west side of town.  It took a full two hours.  Two thirds through our trip she asked for the route map in my lap and started tracing our route in real time.  Every time we turned a corner or went around a curve, there her finger was, following right along.

And, not that I'm at all surprised, she dances through the grocery store to the satellite radio oldies saying, "I use the square tiles to show me where to go, they help me make up my dance steps!"  I swear to heaven above that I did nothing to overtly influence that observation.

At some point I expect we will bring all this math down to the page.  I almost said bring the math 'back to the page' but that's not what is happening.  The math is in her head, thoughts and daily maneuverings first.  You can't bring something back where it never was in the first place.  There will be plenty of time for learning a formal notation system in the future, but it's still August and she's only six.

It does strike me, though, that much of her mathematical thinking and reasoning right now seems to center around numbers, calculation and measurement.  Ever since they started adding the dots on dominoes in Kindergarten this past winter she has really been taken by the process of adding together and taking away.  I know math is not all about numbers but, no matter.  These are the concerns of her mind, not mine.   I do celebrate, however, that it is, apparently, very easy to find math all around us and I 'm excited to see what we find next!
Posted by Unknown at 8:13 PM