We have a LOT of kitties in our house.  And they're all real, too.  Most are stuffed, some are ceramic or plastic.  Others include a rare bookmark breed and one in a frame.  We also have an amazing example of the exotic puzzle breed, one who is an imaginary friend, an actual breathing, chipmunk-catching cat and, finally, one who is a special kind of human cat with white fur and a brown spot on her head.

When faced with multitudes like this, a mama's mind turns to math: Just how many kitties do we have and can we remember all of their names?  How many different types of kitties are living here?  How old are they?  Who is related to whom?

This morning the girl wanted to play vet.  I wanted to revisit the Kitty Census we started back in the summer.  As with many things, we compromised.

ALL the cats went to the vet.

I was the intake coordinator.  Each cat was registered by name, age, type/description, and malady.  Some of the issues included: "a little sad", "lying around, droopy whiskers", "smelly", "bedraggled", "music slows down at end" (that was the music box cat), and "hurt paw".  In the end, twenty eight showed up for well visits and eleven had some serious issues.  After a triage that took about an hour, we attended to the sickest first.
﻿
﻿ 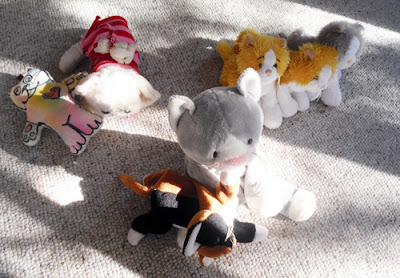 First, the sick kitties, pictured above, all had a thorough examination, including temperature taking and whisker inspection.  Of the group, the Webkins family all had strep, two were afflicted by a 'fever' of undetermined origin, and two needed immediate whisker surgery.  Two others, originally thought to be sick ('lying around'), were determined to simply be acting like cats. 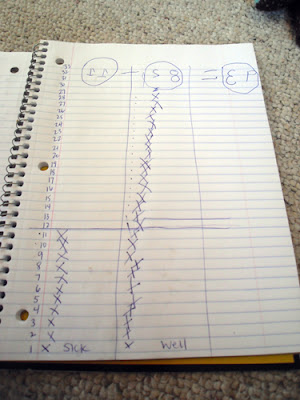 In the end, I think we simply set the stage for more questions about our brood.  I had her chart out the number of sick kitties compared to the well.  She was curious about how many kitties there were all together, and initiated a count starting at 28 (well) and counting up the sick column to find the sum total.
We'll revisit the intake records and mine it for more data in the near future.  How many family groups do we have?  How many different breeds and how many in each category?  What else do we need to find out about our household of kitties?
Until then, one thing's for certain: We've got a whole lotta' kitty loving going on 'round here.
Posted by Unknown at 9:01 PM