One of my most enjoyable creative endeavors these days is accompanying my daughter (age six) on her math learning journey.  Sometimes we play games, or work with pattern blocks or Cuisenaire rods.  Sometimes she wants to earn and save money so she can eventually run away with her best friend.  Whatever we do, she learns best through conversation and narrative.

She also learns math without me.  There are plenty of times when she happens upon something 'by accident' by which I mean: things (books, puzzles, making supplies, marbles, tape...) left around the house, acted upon, forgotten for a while, ultimately to be rediscovered a month or three later and acted upon again, but this time in new ways.

This happens a lot 'round here.

For instance, we have tangrams in almost every room of our house.  There's a magnetic puzzle book set in the car and approximately six plastic sets on the game shelf, of various colors and all mixed together. I have four sets of magnet tangrams that I got at the NCTM Annual Meeting in Indianapolis this past April.  They have been on the fridge in the kitchen since then with minimal interaction...until recently, and, last I looked, they were all in use in some kind of design or another.

Here's what I found my dear child doing with the set of car tangrams (inside for some reason) over the last few days.

By way of setting the scene, I should tell you that the kid generally initiates and works independently on any project she pleases during her afternoon quiet time, usually with the company of an audio book.  A few days ago during this time she informed me she was "making a math book."  I had observed her tracing tangrams, but was surprised to find that she was doing it in a deliberate way, and that she was also able to clearly describe her discoveries and observations to me. Here is the book, so far.  I am just a scribe here -- these are her words as she dictated them to me, except where noted: 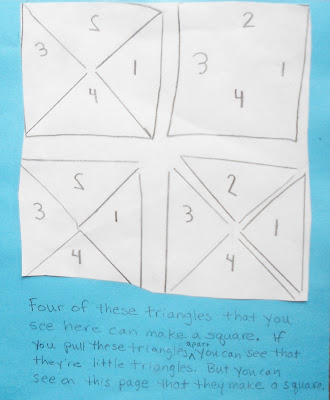 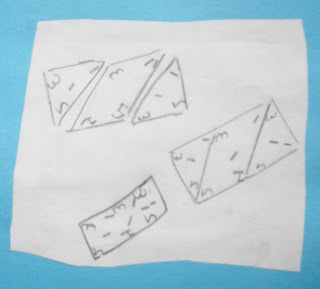 "This rectangle you see is made up of a parallelogram and two triangles.  Really they're just shapes, but when you put them together they make a rectangle." [It looks like she's numbered the inside angles of the individual shapes.  It also looks like she is again showing the process individual shapes merging into the intended new shape.] 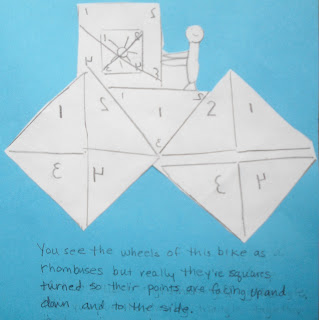 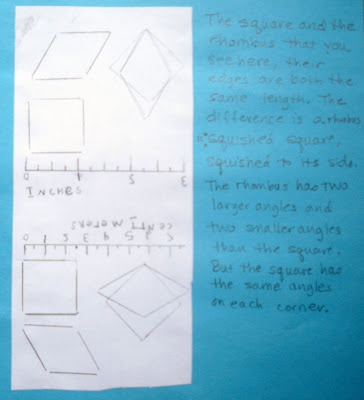 "The square and the rhombus that you see here, their edges are both the same length.  The difference is a rhombus is a squished square, squished to its side.  The rhombus has two larger angles and two smaller angles than the square.  But the square has the same angles on each corner."  [These are actually tracings of shapes from the pattern blocks set we have.  The ruler markings was her idea for comparing the two shapes.  I supplied some new vocabulary in the form of 'angles' and made some observations about the difference by overlapping the two shapes, in an effort to help her observe and further articulate the difference between the two.]

Writing about all of this made me think to look up more about the van Hiele levels for geometric reasoning.  I need to spend more time with that to analyze how I'm interacting with future discoveries of hers.  I also think I'd like to focus more specifically on flips, turns and slides.  Maybe I'll be super ambitious and have us play around with flips and turns using both 2D and 3D shapes!
Posted by Malke at 9:17 AM