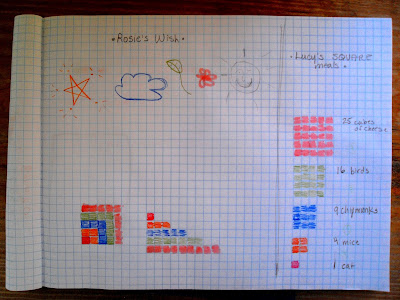 I feel comfortable doing a lot of things, but storytelling isn't one of them, especially when my kid insists I make one up on the spot. Today was no different, but luckily I got inspired.  There have been a few math-y things I've been wanting to introduce, but she's been having none of it.  Fortunately, a narrative (even a thin one) is often the way to get her hooked so I decided to go for it.  Here, then, are three of today's stories.  The first two illustrate different aspects of square numbers.  The third was actually mostly for me to start figuring out how to explain sets -- I'm not quite sure I've got subsets yet.
As you read my modest stories, please imagine me simultaneously illustrating while I narrate.  The illustrations build as the story develops...one red cat, three orange kitties, five blue raindrop cats, etc. 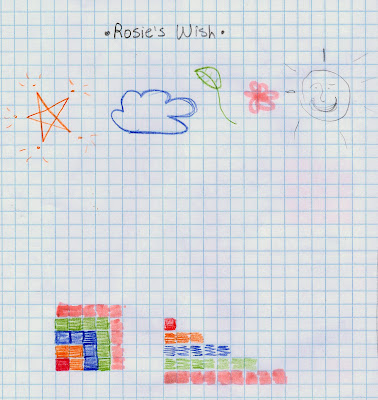 Once upon a time there was a little red cat named Rosie [one red box colored in] who was very lonely.  She wished on a star for the company of a few new friends.  [You tell good stories mama!  Just as good as papa...!]  The star said, "I think I can do that!" and sent down three orange cats to play with.
The little red kitty loved playing with her new friends, but soon wished for even more friends.  She looked up into the sky and this time made a wish to the cloud she saw floating by.  The cloud obliged and sent her five blue raindrop kitties.  They played and frolicked, but soon wanted to share the fun with even more cats!  The little kitty made this wish to the trees around her, and the trees sent her seven little green leaf cats and, later, nine pink cherry blossom kitties.
The whole group, all 25 of them, played and frolicked the night away.  When the sun came out in the morning, they were all tired out.  And what do kitties like to do in the sun?  Why, they curl up and take a nap!

The pink kitties lay down first, and made a soft bed of flower petals.  The green leaf cats added to the bed, then the raindrop kitties, and then the orange cats.  Rosie lay on top of the whole pile of friends, purring happily.

You probably noticed that this story ended up illustrating the growth progression of square numbers, first in a square and then in a line.  I didn't mention anything about squares or numbers in this story.  My thought was that I wanted to present the image and show the growth, which I think is cool to look at; laying the same number of squares out in lines was an in-the-moment inspiration and shows the pattern of growth more clearly. The kid loved the story and, interestingly, didn't bat an eye at the fact that the characters were represented as little colored squares!

Story #2: Lucy's Square Meals
Lucy, our cat, likes to eat.  She begs and begs us for food.  Today she said, "Give me something to eat, I'm starving.  You haven't fed me in weeks!"  So, we gave her four orange mice.

Lucy said, "That was a great square meal but I'm still hungry -- give me more to eat!  I'd love if it could be another square meal but even bigger this time, meow!"  So we gave her nine blue chipmunks.

Of course, that was only a tiny snack for Lucy...[I want things to fall from the sky! the kid interjects]...and she wanted another square meal, bigger than the one before.  So, we got some of the green birds that were flying around up in the sky.  As before, the meal had to be bigger than the last one, so let's count out four birds in a column, but look!  That's not a square, that's a rectangle!  If we add four more, that's still a rectangle...oh look!  Four columns of four green birds in each column make a square that is bigger than the square of blue chipmunks.  How many birds did she eat all together?

I can't imagine Lucy is still hungry....she IS?!?  What does she want to eat this time?  Okay, a square meal out of cubes of pink cheese.  How many cubes of cheese will she get....?  I think that's enough food for Lucy, don't you?

There was actually quite a bit of buy-in from the kid on this story, especially when I was 'trying' to figure out how to make the green square bigger than the blue one.  She actually leaped in to help her apparently inept mother, ha!

Story #3: {The Family in the Fancy House}
Once there was a family who lived in a fancy house [Meaning the brackets { } used to denote a set].  The family included Lucy (a living cat, red square), Isobel (a living cat, blue square), Mama (green square) and Papa (orange square).  Sometimes they are in different rooms of the house, but no matter where they go in the fancy house they are all still part of the same family. Lucy and Isobel (red and blue squares) are included in the family who lives in the fancy house.

In addition to Lucy and Isobel, there are other kinds of cats in the fancy house as well.  There are soft cats, and china cats, and plastic cats too.  The two living cats in the house (Lucy and Isobel) were also included in a set of 33 soft (living and stuffed) cats...

...and I left it there for the day.  To you, Lucy our cat and Isobel the daughter/cat might not be in the same set, but they are to Iz.  In fact, things got a little rocky when I defined the other soft/stuffed cats as 'not living'.   The set/subsets concept is new to me and, honestly, a little challenging.  The kid and I have lots of conversations about same/similar/different, in a Venn Diagram style, but this seems different somehow.  I actually think it will make more sense when we figure out sets using numbers.  Or maybe it's time to ease in the Cuisenaire rods?

I'm not yet sure what she made of all this math-y storytelling today.  But, the beading/pattern experiment from last week is really bearing fruit this week (lots of spontaneous observation of and creation of patterns) so I'm fairly sure square numbers and sets will show themselves in her play or drawings in one form or another some time soon!
Posted by Unknown at 2:37 PM