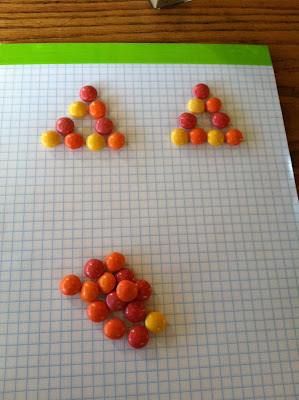 Me:  Great!  So let's see if we can make another triangle just like our first two, except with different patterns. [Kid starts right in...]

[I've been thinking lately about the importance of modeling inquiry, especially in the math we do.  I want her to not just identify patterns, which she's good at, but also consider those patterns malleable to the whims of her own curiosity.  Also, if I ask a question that leads to my desired result it's generally a lot more successful than giving her a direction.]

Me: What would happen if we added on two more triangles the same size but with different patterns?

[With these sized candies it was easier to build the fractal structure if we made each 3-candy triangle out of three of the same color.  I also had to point out that the right and left sides of the top triangle had to be extended diagonally to make this work, which was a bit challenging for her to see and do.] 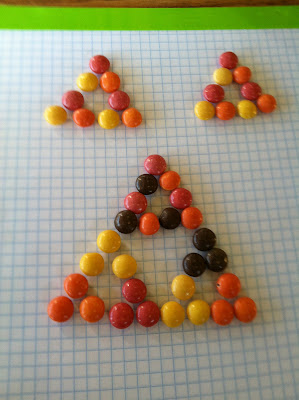 Kid:  Oh look!  There's a triangle in the middle!

Me:  Let's take this big one apart and see how many different colored candies we used. These three columns each have six candies and the orange row has how many...?  How many candies is that all together? 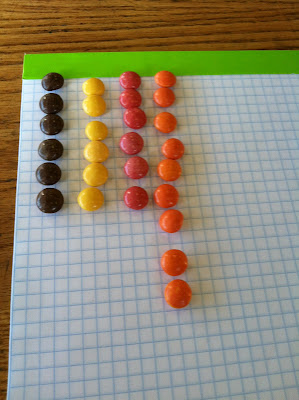 Me: I wonder if we could make another big triangle using the same candies, but different color patterns? 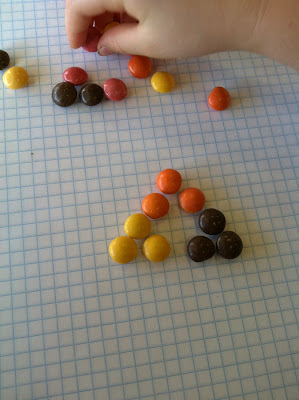 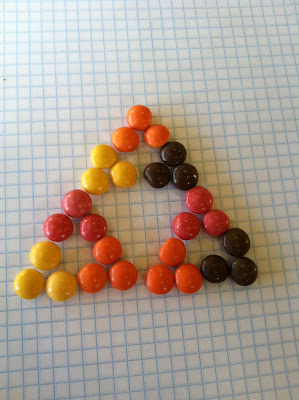 Day Two
I have been waiting for months and months to use this sheet I found here.  It's meant for older kids, I think, but we adapted it just fine for the candy approach.

Me: [The sheet starts as one large triangle with mid-points on each edge.]  Let's put a candy on each corner!

From there I modeled connecting the midpoints, and she jumped in to help. 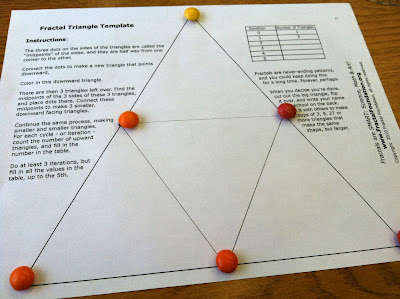 When the time came for further subdivision, I modeled measuring half of each new side; she wanted to help with this as well. 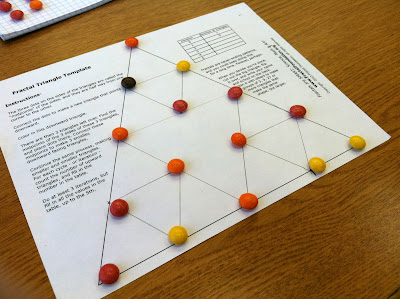 We compared how many more candies were needed for each round of subdivision, which inspired a rousing bout of skip counting by threes, and then the realization of shared corners which meant finding a different way to count the candy corners.  Very fun. 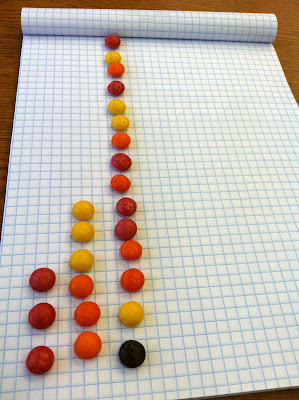 At some point  in the second round of subdivision I realized she wasn't really understanding why we weren't subdividing the center triangle, so we colored in the top pattern, and placed the candies as well.  At that point she was loosing steam, so we ended it there.

But, here's something I just realized I don't understand:  After looking at the materials from the Fractal Foundation, I'm wondering if it's better to only color in the middle triangles, or does it matter?

Until this very moment, writing out this post, I thought I understood what was going on in a Sierpinski triangle, but now I'm not so sure.  Is each iteration about the creation of new center triangles?  Is that what gets counted (1, 3, 9, 27...)?  I guess this is a good example of  the importance of exploring a math concept multiple ways (e.g. not just observing a finished pattern but actually making it yourself) to make sure you really understand it. 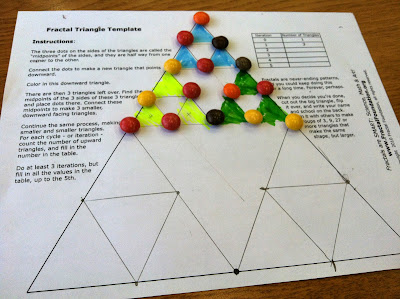 I hope some of my readers will have some thoughts to share with me (hint, hint).  I think we'll try this again but in the mean time I'm hoping to see if this fractal shows up in my daughter's drawings somehow.  It happened with fractal trees last spring inspired by the book Penrose the Mathematical Cat.  It's happening with the star inquiry too.  I may find some coloring sheets so we can explore coloring in center triangles.  An Apollonian gasket might be fun, too.  Or, hey!  I just remembered I got some new colored floor tape in the mail - each new center triangle gets its own color?  Fun times!
Posted by Unknown at 3:21 PM