I met with my K-2 group on Monday. This was our fifth session together. They have experimented with different combinations of steps and jumps executed in a variety of directions inside their square dance spaces. Their self-made maps are showing burgeoning competency in many students to think precisely about the location of their feet while they dance. It's amazing to see their growth from one week to the next.

This Monday five of the kids had been out sick the Friday before; many were back but still under the weather, and four others were absent.  Because of this I realized we needed something different than the high energy math/dance making we had done so far.  I decided to switch things up on them.

Could they figure out how to dance a pattern starting with the map?

This is the pattern I gave them, fully notated.  Take a minute to try it out.  It’s not hard, but it will help you understand what happened next as I led them through transforming this map into a real-live dance step:

By giving them this map I was challenging them to use their current knowledge of “what makes our dance pattern” in the brand new context of decoding visual/spatial information. Instead of translating from action to notation, I wanted to see what would happen we moved in the opposite direction.

But I didn't want them to be overwhelmed, so I broke the process down into a number of steps.
Step 1: Some of the information, not all of it

Me: Look at the whole thing. We’re going to spend some time looking, some time talking to our partner about what we notice, and then we get a chance to try it out.

As kids started talking to each other, some of them gestured the foot positions with their hands as they talked to their partners.  One kindy girl came up to me and told me, “Malke, you missed a dot…” meaning the single dot in Beat 3. My response? “Well, this is for you to figure out.”  Here’s what they noticed:

Me to the class: Can you tell me more? What does that mean I might want you to do with this?

Kindy kid: Start there [pointing toward the center of Beat 1]

Me: And then what do you think you would do?

Kindy kid: Go to the colored parts [gesturing with her right hand, 2 fingers split to make a ‘v’]

Me: Okay, let’s all stand up with our partners and see if you can figure out what to do.

Step 2: Let them come to an answer that makes sense to them.

As they worked on decoding the dance from the map my basic question at this point was to ask both partners, “Does that feel like a good solution to you?”  My biggest goal at this point was to see how they were interpreting the map.  Some of the answers came back looking like this:

This was a solution that showed up in a bunch of teams.  Jumping so far has meant that the feet hit the floor either “together” (side by side) or “split”.  Presented with a single dot on Beat 3 makes no sense if you’re jumping so the only logical solution at that point was to put both feet together in that position. Two Kindy girls (one of whom told me earlier that Beat 3 was “missing a dot”) came up with a solution that was the closest to the intended pattern:

Another fascinating interpretation by others in the K-2 class, and also in the 2nd grade class at my other school later in the day, was interpreting forward and backward from the map.  The original map shows two individual dots in the back L & R corners.  The team (whose work is pictured below) read that information and put themselves physically in the front two corners.  The reason this fascinates me is that most kids had oriented their physical selves within  the blue tape squares. They had also been successful writing out their own maps (which I could reproduce correctly). Nevertheless, many of these primary grade children moved themselves forward when the map read backward. Here's a representative example:

I wish I could say that by putting arrows facing “up” on the big math/dance map at the front of the classroom helped all the kids understand why they shouldn't move forward when the map read “back”.  Truthfully, what helped the most was adding one finally piece of information into the mix.

Up until this point not one kid had even thought to ask what movements they should use. They all just assumed they would jump.  So I said: “I on purpose did not give you all the information you needed in order to do this dance pattern exactly the way I made it. So, do you want to see what I'm going to put on now?  This is what the chart looked like: 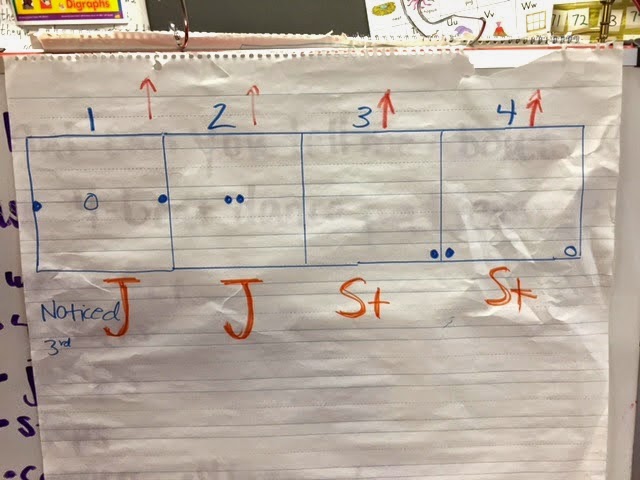 I told the class “Take a minute to look at it, talk to your partner about what you noticed.” They noticed the Jumps and Steps. “But what does that mean?” I asked. “What does that mean is going to happen?

Kid: You jump and jump then step and step.

Me:  Okay. Does anyone else want to say that in a different way? [Silence] What does it mean when it says Jump under the 1 box?

2nd grader:  OH! So it means you're jumping to the sides! [Gesturing: hands splitting apart].

Me:  Okay! Let's stand up and try this with your partner!

After a couple minutes I ask the class, “Let’s see if we came up with the same solutions for this pattern.”

A 2nd grader and kindy boy show their work.  The boy watches his partner’s feet very closely and gets that he needs to be stepping in a back corner, but goes left instead of right. I ask them to go slowly and on Beat 3 ask “Which foot goes first, the one toward the window or the one toward the door? Toward the window? Okay, so we'll say Sides, Center, Window, Door while they dance.”

Everyone says it with me while they dance: Sides, center, windoooowww...door.

And they got it!

Me: Okay everyone. Put yourself in the center of your square facing toward the board.  Point toward the window?  Point toward the door! [Correcting facing of some kids while I move to the front of the room. Then I have them “mark out” the dance steps with their hands while saying] side, center, window door.

Me: We've got it! What are we going to call this pattern? Side center window door?

Me: Okay, one last time. Let's hear everyone's feet together. SIDE CENTER WINDOW DOOR!  Excellent give us a round of applause!

At this point I decided it might be good for them to map out this pattern.  I turned the classroom map over (out of sight) because I was just curious what would happen.  While they waited for me to get the papers I hear that S, a first grader, has “made a song” out of the pattern. She sings it for us, “Side center window door!” and we sing along...twice.

And, although not everyone was able to map out their foot positions on the outline I gave them, many of kids wrote out the words we used: “sides, center, window,  door.”

And everyone hummed S’s tune as they made their maps.
Posted by Unknown at 5:01 PM

Email ThisBlogThis!Share to TwitterShare to FacebookShare to Pinterest
Labels: #miyfeet, Math in Your Feet, primary project