We've been on a triangle kick around here, of a Sierpinski nature.  When we made this fractal with candies, a question entered my mind -- after you divide a triangle by connecting the midpoints of each side, is the Sierpinski triangle defined by the three outside triangles or the one center triangle?

My answer right now is: probably both.

When we built a Sierpinski triangle with colored candies, two different ways, my seven-year-old really did not see the structure.  She saw lots of other things, but not that.

So, I pulled out a sheet with the triangles already drawn in and we colored it one recent morning.  The first, largest middle triangle we left blank.  I asked her to pick a color and color in the next-largest triangles, of which there were three.  And then the next largest (pink), purple, yellow, orange...

"The triangles get smaller...It's so pretty!" she gasped. 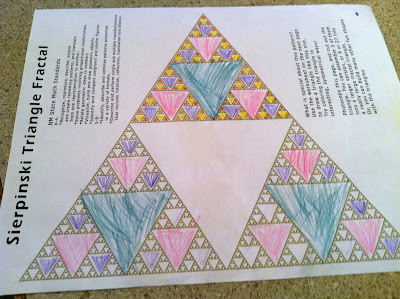 What we both noticed is that that center triangle then gets surrounded by three more, smaller triangles, and the pattern repeats.

This afternoon, the kid was eying the change jar... "Mama, I have a GREAT idea!"

"Let's do some money math!"

"But you are really good counting money, why do we need to do that?"

"We'll do triangles with the money!"

"Well, okay, but I've not made up my mind about what we'll do with the money once we count it..."

First we made a passable Sierpinski triangle with pennies and counted them up. 27!  It was great she wanted to do it because although the pattern seems easy to identify, constructing one this way is still a bit challenging and we both still need some practice.

(And my mind is reeling with a question I can barely pose, let alone answer -- the numbers 3, 9, 27 etc. usually refer to the number of triangles in the fractal, but it seems that when we build it out of candies or coins, the numbers of individual pieces share the same pattern, but in a different way...) 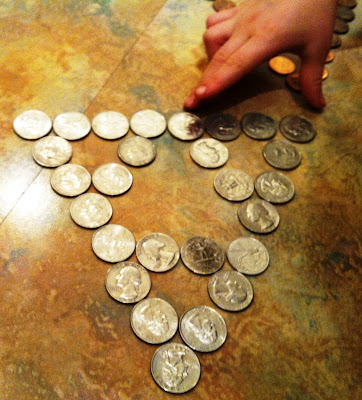 The quarters came next, both versions a great opportunity to talk about each triangle (3 coins=small, 9 coins=medium and 27 coins=large) needing three triangles to complete the next larger triangle. It's a similar observation to the one we had when we were coloring, but sort of reversed.  Instead of getting smaller by threes, this one is getting bigger by threes.  Hmmmm....

Here's what I know right now:

Things are not always as straightforward as they seem, especially fractals. Having to teach something, anything, to a child always reaffirms this point for me.

Coin currency is a way awesome math manipulative, on so many levels.

I've got two more Sierpinski triangle activities up my sleeve, one of which is about growing the pattern (but not with chocolates or candies), the other about dividing it into smaller parts (but not on paper).  No hints on these, though!

Also, If you have any photos to share of money math you're doing with kids, or Sierpinski triangles, or math you find around the house or when you're out and about, please don't hesitate to post a photo at my new Math in Your Feet Facebook page!  We'd love to see what kind of math-y things you've been doing or making!
Posted by Unknown at 6:54 PM