Lately I've been looking for different ways for my seven year old and I to conceptualize multiplication. As has happened many times before on our math journey, this graphic showed up at just the right time (albeit somewhat circuitously through the excellent influence of the Math Munch blog). 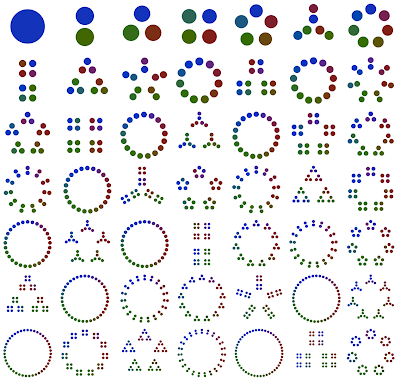 My favorite thing about it is that it's not about numerals; when I look at factoring trees I can make some surface sense of them, but my mind goes numb pretty quickly. In this visualization, however, there is an incredible connection to shapes and grouping. I find this visual especially well-suited for kids in general and at least this adult specifically.

Last night I printed out the graphic and left it advantageously on the kitchen counter. I thought maybe my kid might be interested but was truly surprised by her reaction when she found it this morning.  It is probably the first piece of math my daughter has ever admitted she was excited to know more about, which is saying a lot.

She wondered what it was about so we looked it over together.  At first it was basically 'count the dots' and notice that each configuration was one more dot than the one before. Then, in the same way we tackled the 100's chart last winter, we started looking around and noticing things: The ring of seven dots on the far right column has multiples of seven underneath it.  The 6 shape shows up two more times on a descending diagonal. It's fun just to look and talk about what you see. 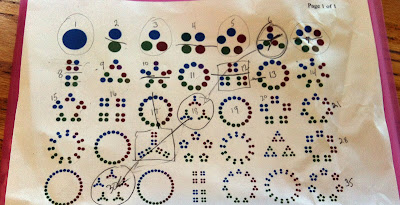 It's the geometry of the design that really shows the relationships between numbers. And, even though this was not meant to be a multiplication chart, it's probably the best one I've ever seen.

All our talking and looking got my mind spinning. What if...what if I made little playing cards out of each factorized number? What kind of game would it be?

I was about halfway through constructing the cards when my big AHA! moment hit. As I made and sorted them one by one it became completely clear to me that the integers 1 through 7 formed shapes that were echoed in the other factorizations.  As an attempt to organize my growing pile of cards I laid out a top row of 1 through 7.  But where to put the other cards? For example, 5 is a pentagon made out of single dots and 10 is a pentagon group of two dot groupings. Where does it belong?  The 2's column or the 5's column? This kind of question is at the heart of the new game.

Here's how my daughter decided to sort them in a 'get acquainted' activity before we started playing: 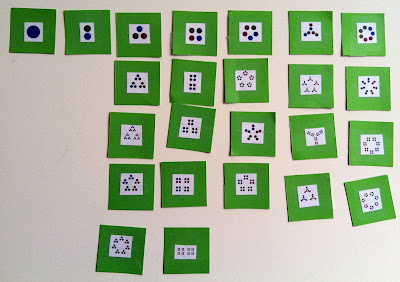 As we went along I refined the language she needed to help her make her choices. Was she going to place a particular card based on its large grouping (outer shape) or the smaller groups? As you can see above, there's a 5 shape of 3s in the 3 column, because the smaller group is a match to that number. But, every other 5 shape is in the 5's column. She's also got a 7 shape in the 3's column for the same reason -- the smaller grouping matched and, ultimately, the whole 3's column is consistent on that criterion.

For some comparison, here is how I sorted the cards, earlier in the day. I was trying to match to the category of 'outer shape': 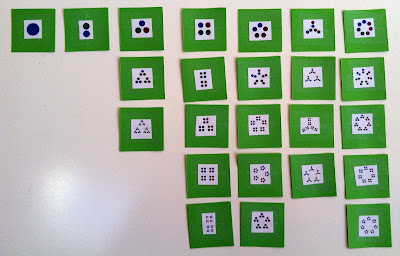 I'm not sure I got it the way I wanted it, but no worries.  There is probably no one right way to sort these cards and the activity in itself makes for some really interesting thinking and conversation.

After she familiarized herself with the cards we started in on the new game which I'm calling Factor Dominoes (with a side of Scrabble). The title alone should give you clues as to the game's aesthetic and procedure, but here's how to play:

Split the deck equally between two players. Player 1 puts down the opening card. Player 2 tries to find a match. If Player 2 has no match the card is put aside face up for future use and play returns to Player 1. You can find a match either by outer grouping/shape (triangle, square, pentagon, weird six shape and seven ring) or by similarity between the small dot groupings. In our game we also matched 'echoes' -- small groupings that are the same shape as another number's outer shape. 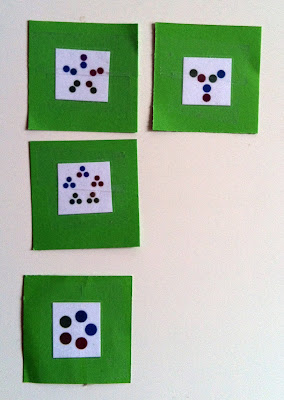 Here's another example: The top line of matches have the 3 shape in common. The bottom row connects to the top with small groupings of 4. 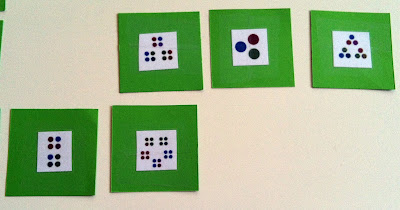 And, here's a picture of a couple more interesting matches.  See if you can figure out our reasoning on this section of the game: 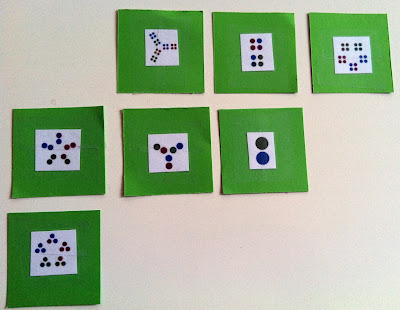 Play the game until there are no more cards. This is a cooperative/conversational game but feel free to give it a point structure if you like. You can also make the game bigger and more complex for older students -- just cut out more factors and make more cards! That's what I'm going to do for our next round of play.

Here is our completed first game: 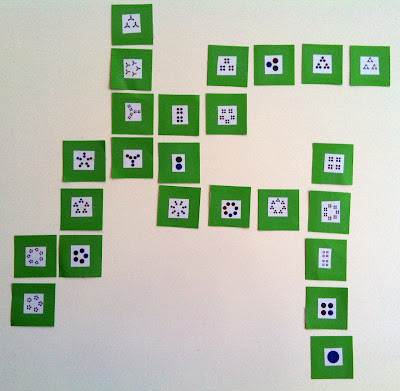 Based the exponential growth of my personal understanding of primes and factors, gained in just one short day, I am firmly convinced that a wide range of ages, experiences and abilities can get something of value out of this game.

My seven year old was perfectly challenged as we focused on groupings, but what if you added the prime numbers beyond 7 into the mix? How would that deepen or change things? What about adding exponents as a match category? What if you figured the value of each card and matched them in sequences (like {25, 26, 27, 28...} or {4, 8, 12, 16...} or even a sequence of primes, in order)?

If you do play this game PLEASE let me know how it went and what other ideas you have for it.  And, please do consider joining us on the Math in Your Feet Facebook page. We're having a good time over there!
____________________