Okay, I'll admit that when looking at a hundred's chart I've had the thought, "What's the big deal?"  I mean, the kid learns to count to one hundred and that's pretty much all there is too it, right?

I still had that thought when I read Julie's post over at Craft Knife about her love of hundred's charts and her kids' love of the game 'Roll to 100'.  But, since Julie was so enthusiastic about it all and since we've been using dice for math games lately, I thought I might look into it.  Maybe the kid would be interested in coloring in the hundreds chart that way?

She loved it!  In fact we played the game twice!  The second time we played she got all fancy and wanted to color in the chart using 'rainbow order.' 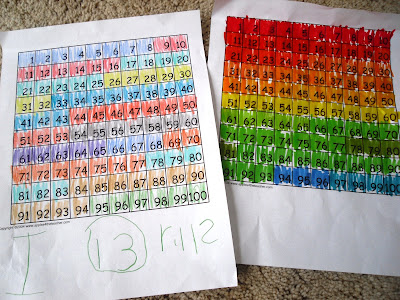 I think this must have been the first time she'd seen a chart like that.  I know they did a lot with counting to one hundred in kindergarten; I may be wrong but I don't remember seeing a chart like this in the classroom.  Anyhow, after a couple games with the dice I wanted to bump it up a little, and I remembered that Let's Play Math has a great post about twenty things you can do with a hundreds chart.


From there I found a link there to some printables, including partially filled in charts where the kids can finish filling in the numbers.  Frankly, I was still dubious.  I wondered, "How hard is it really, to fill in the chart?"  I printed them out anyhow on the off chance I'd find a way to use them with the kid.

That was last night.  Today the kid had a leftover Valentine sticker that looked like a gold medal and she was searching for something to 'win'.  I said, "Wanna play some games with me?"  and she said, "Why don't you give me a math test and then I'll win this gold medal!"

I said, "Well, why don't we do something with the hundreds chart again, but this time I have a couple different options for you.  Do you want the one that's already filled in or one that's partially empty?"

She picked the partially empty one and, as we sat down, I did have the fleeting panic thought, "What am I going to do with this?!?"  I started with the already filled in three and said, "What comes before three?  Can you fill in those numerals?"  Then I noticed the tens all went down the right hand column.  I knew that she loved skip counting by tens, so we started there.

"What do you notice about this column?" I asked, and then the fun began! 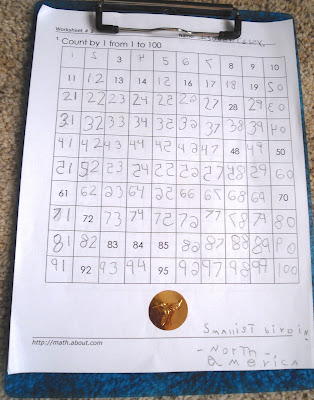 Over the course of about 40 minutes, which is amazing for her, we alternated filling in columns and rows.  Since she knows skip counting by fives, we did that column next, but quickly realized that even in the five column you don't count by fives!  Obviously, I did not spend enough time with this chart when I was a kid.

Anyhow, after figuring out what really needed to happen we tried the one's column.  I asked her, "This column starts with one, and the next number below is eleven.  We know now that when we go down the column, each number is ten more then the one before, so what number comes next in the box below eleven?"  It took a few minutes to establish an understanding of the pattern, and I used words like "Three tens and a one, four tens and a one, etc." to try and emphasize place value a little.  She only put up with that for about a minute at which point she asked me to stop talking so she could figure it out herself!

Initially she found filling in rows easier, because all you do is increase by one, but I encouraged her to do columns too.  At some point she exclaimed, "There's a pattern to this!" and happily filled out the rest of the chart column by column.   About two thirds of the way to completion she gushed,

In the end, when I look at the completed chart I'm still sort of thinking "What's the big deal?" but, watching her figure things out today, I know the meaning is in the creating.  There were a bunch of different, mostly empty chart printables that I printed out, and I'll leave those lying around and see what happens next.
Posted by Unknown at 3:18 PM