Allegory of the (Math) Cave 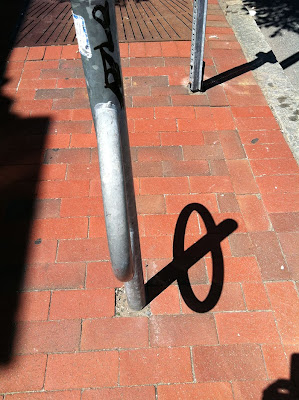 No. It's a bike rack that, with the sun's help, created a shadow of the symbol for phi.

Is the symbol itself math?

No. Plato says a shadow is not reality.  Here's a description of his cave allegory (bolding and brackets mine):


"Plato has Socrates describe a gathering of people who have lived chained to the wall of a cave all of their lives, facing a blank wall. The people watch shadows projected on the wall [symbols] by things passing in front of a fire behind them, and begin to ascribe names to these shadows. According to Plato's Socrates, the shadows are as close as the prisoners get to viewing reality. He then explains how the philosopher [math teacher?] is like a prisoner who is freed from the cave and comes to understand that the shadows on the wall do not make up reality at all, as he can perceive the true form of reality rather than the mere shadows seen by the prisoners." [Wikipedia]

A recent post over at Christopher Danielson's blog Overthinking My Teaching got me thinking about this image of the shadows at the back of Plato's cave, especially this comment by Sue VanHattum:


"Have I reached Malke’s beautiful standard of embodied math? Nah. But it’s in my head as a goal, whenever I can make sense of it.

"Malke, here’s one body thing I do that probably doesn't count. The graph of y=x^2 is a parabola. I like to think of it as having both arms up. I like to think of the graph of y=x^3 as having one arm (left) down and the other (right) up. We are working with graphing more complicated polynomial functions, and I ask them to show me (what I call) the big picture with their arms. I’m hoping to get them to hold this visual information more firmly in place while they work through the detailed parts, so that their graph will reflect their thinking on both the big picture and the details. I’m using body movement just as a cuing device, really."


"Sue, I think making sense of what math is in the body is a lengthy ongoing proposition for most of us, even the dancers.  My goal is to at least raise some questions: Is the graph the math? Are the arms doing the graph the math? My answers: The graph is the representation of the idea and the arms are the representation of the graph.  That is why my blog is called 'the map is not the territory'.  Those teachers Christopher mentioned are part of the legions of people who, by no fault of their own, mistake the textbook (map) for the math (actual experience of thinking and doing math) because they've never had a chance to travel the actual terrain of math land.  Personally I think there's no problem with a 'cuing device' or mnemonic as long as you are aware of where it lies in the continuum of math learning and your teaching goals."

I repeat: "...the philosopher is like a prisoner who is freed from the cave and comes to understand that the shadows on the wall do not make up reality at all..."

Most of us (myself include) have learned shadow math in the caves they call school.  Here's a question from Christopher that might get us out of the cave:


"Math comes from, and lives within, textbooks. I am not OK with this.

"So what can we do in every lesson every day to represent mathematics as a subject that comes from, and lives within, the minds (and bodies) of our students?"

These are the things I am thinking as I try to make a worthwhile case toward using the body in math learning for something other than re-drawing the 2D representations in our textbooks.
Posted by Unknown at 7:08 PM