It's #twittereen over on Twitter.  The last few days I've been completely confused by people's profile pictures/avatars as they 'dress up' as someone else.  I was pretty sure I would just let this one roll right by -- I don't usually move or think fast enough for social hyjinks -- but then I saw this. I wasn't sure what it was, at first -- I know my taping anywhere, and this looked suspiciously less professional different: 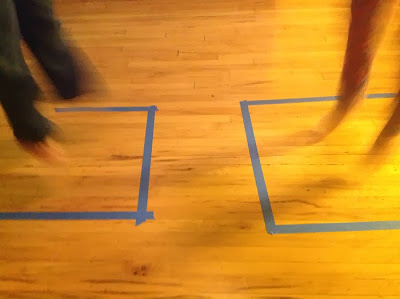 Turns out, Christopher (@trianglemancsd) dressed up like me!! This is the picture that I use on Twitter (notice the precision tape job ;-).  Fun stuff! 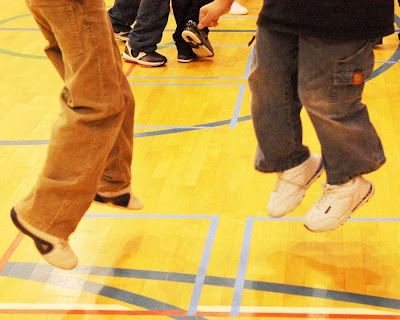 Later, it became clear those are his kids jumping in the photo he took! And, an even better surprise was that completely without prompting, his action of putting tape on the floor turned into a story that confirms everything I know about tape on the floor. He wrote:

I laid down some tape on the kitchen floor for the photo last night, then proceeded to do the dishes. Tabitha [who is six] wandered in and proclaimed "There's tape on the floor!" She then spent the next 20 minutes making up games using the tape lines. There was one where you needed to jump from one tape line to the next, always landing on one foot, with an extra challenge of landing as close as possible to the end of the line. There was another where you stand in one square, put your hands in the other then jump your feet over to the one where your hands are, with extra credit for doing it with style.

She was eager for me to finish the dishes so that she could teach me the games, which she did and we spent another lovely 15 minutes on that before I had to cut off for the photo and then bedtime.

It was a beautiful little family moment.

See?! This is what I have been saying for years! Put down some tape, even just one straight line, then wait and watch. Changing the environment, even slightly, will invoke an explore response in kids and, inevitably they will find some way to figure out this 'new' space with their bodies. (And, it's a body thing, but for kids it's also a body knowledge math thing.) Fantastic.

Also, I have a square on the floor of my office (more carefully taped, I'll have you know) that I laid down when I was practicing for my #miyfeet lesson. People notice it and comment on it when they come in. But NO ONE plays with it. Common questions from my colleagues include whether it is where they need to stand while they talk to me, or where I put students who don't do homework. Students tend not to comment on it. Tabitha hasn't been in my office since I laid it down, but I predict great fun will be had when arrives someday.

No, it's a KID THING. That's why adults (even teachers unfortunately) don't get it right away and why I am always in need of more proof/examples of the power of tape to inspire movement and explorations of space, especially in younger math settings. Harvard professor Eleanor Duckworth, in her book of essays The Having of Wonderful Ideas, speaks to my reasoning around tape:


"In my view, there are two aspects to teaching. The first is to put students into contact with phenomena [of which tape on the floor is a good example] related to the area to be studied -- the real thing, not books or lectures about it -- and to help them notice what is interesting; to engage them so they will continue to think and wonder about it.  The second is to have the students try to explain the sense they are making and, instead of explaining things to students, to try to understand their sense."

Children can 'explain' their sense making through their bodies if you have the right glasses on. Just before my dance workshop in St. Louis last week I noticed kids out in the lobby playing (jumping around) on an inset in the tile floor - darker tiles that made up an array and a specific space within the larger floor area. These were not just kids getting out some energy (although that was part of the story) but kids having their own new, wonderful ideas about how to explore the new and interesting floor patterns. Kids will play in new ways (to them) and in new physical environments with their bodies first. That's the truth.
Posted by Unknown at 4:58 PM