I just realized that a lot of my posts lately have been about making mathy things out of open ended materials: straws, pipe cleaners, craft sticks, rubberbands, paper, glue.  It's made me think about when I teach Math in Your Feet, how fourth and fifth graders almost can't believe it when they've made up their own eight-count pattern out of nothing more than three categories of movement-based attributes.  One child even said to me, during our end-of-week reflection time: "I didn't know I could make anything."   Heavy sigh. 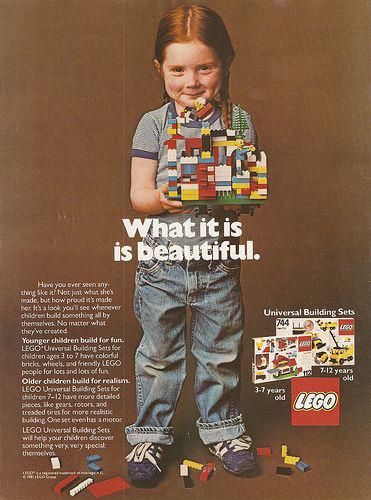 This ad from 1981 reads:
"Have you ever seen anything like it?  Not just what she's made but how proud it's made her?  It's a look you'll see whenever children build something all by themselves.  No matter what they've created."

There's a lot this ad says to me, but the very most important thing is that:

It is imperative that we give our children, and our students, a chance to explore and discover at least part of what they learn ON THEIR OWN, ideally with open-ended materials and perhaps a very casually introduced question.  This doesn't mean that the learning environment becomes chaotic, or that teachers aren't needed.  Structure and forethought are still useful but, in this case, they become the background against which children employ their own desires to the materials at hand.
We need to trust that kids can figure things out for themselves sometimes, and that the best learning often happens as a result of a question and the self-motivation to find an answer that suits them in the moment.
Posted by Unknown at 2:27 PM