Take Your Kid to Work Day

In this case it was "take your kid to 'help' set up the space" day.  For me, every new space presents its own unique set of challenges and it's nice to be able to set it up ahead of time.  That way I don't have to drive 60 to 90 minutes, set up a new room, teach five classes of kids I've never met before, and drive home, all on the first day of a residency.

Here's what part of this one will look like on the first day (I was way too busy problem solving to take lots of pictures and, anyway, it's really a boring space without the kids): 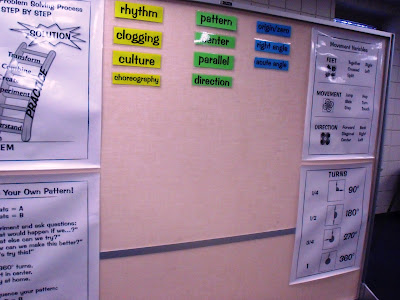 Here's my dance board plus the student spaces for demonstrating to the class.  Notice the carpet.  In this case we have enough space, but the kids won't be able to hear the sounds their feet make.  But that's okay, we'll still be doing awesome work. 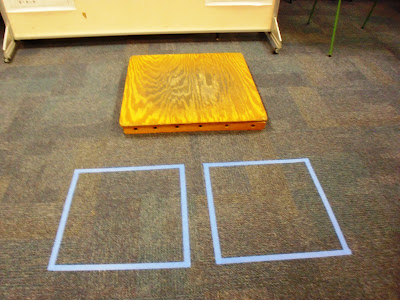 Here's my kid on 'take your kid to work' day.  She helped me put up the posters, move some chairs and then decided to play with tape.  Lucky kid.  I don't have pictures, but she made two really long lines of tape so she could do cartwheels down one and roll tape rolls down the other. 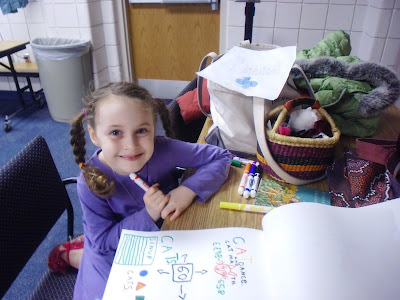 When I was helping her put the tape down I casually mentioned that we need to make them parallel so that they'd be the same distance apart all the way up and down the line.  After that she took a closer look at the Turns poster (see first picture) and went over to the table to make a poster for her own dance and math class.
Translated into standard English, it reads:  "Cat Dance. Cat Math.  Phone Number.  GO.  Choreography.  Performing Cats."  Sounds fun! 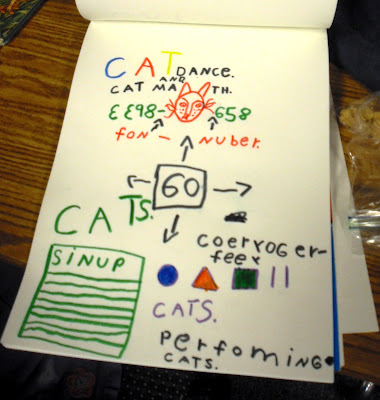 You also might notice the effect the environment and conversation had on her illustrations.  I especially like the square with arrows radiating out of it in all directions (probably influenced by the Turns poster).  And, in the illustration of shapes, along with the circle, triangle and square are a set of parallel lines!

[A side note: Her spelling is making noticeable gains in the past week.  I have to say that's a pretty good go at 'choreography' and 'performing' for a kid who, as recently as last week, skipped all the vowels when sounding out her words, lol!  Isn't brain development spooky?]

She figures that six participants will be enough for the class to run.  If you sign up she'll send you more information in the brochure she made on the car ride home.
Posted by Unknown at 2:00 PM