Making a "Map of Angles"

Sometimes I think the best learning is the least expected kind.  Or maybe it's the kind where you take advantage of the moment.  Like this morning.

"You know, with the plastic map of angles." 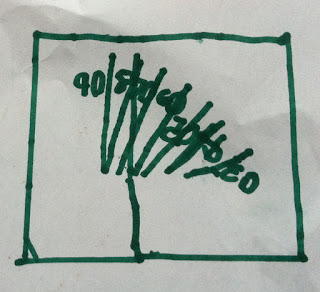 "Yeah.  Wanna buy this one for a penny?"

"Hmmm...let me think about that.  I think its worth between a penny and a dime."

"You got yourself a deal!"

"Hey, I know!  I could make a bunch of angle maps and you could buy them."

"Why would I want to do that?"

"Well, you could use them at your family night."

"Hmmm...sounds like a good idea.  I guess it would work if you could make each map different in some way."

First she marked the angles, and drew the lines free hand. 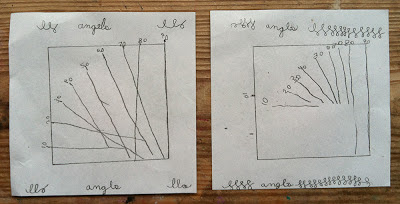 Then I happened to wander by and casually showed her how to draw the rays from a center point.

"Sounds cool to me!" 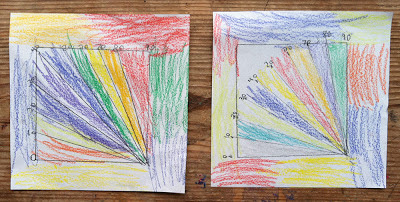 "How much will you give me for them?"

"Oh, I don't know, how about a quarter each.  You're putting some good effort into them, I think they're worth it."

"I've got two sheets left.  How can I do them differently?"

"How about trying it with a circle.  But how would you find the center point?  [Both of us experimenting...]  If you make a circle with your compass you'll for sure know where the center is...." 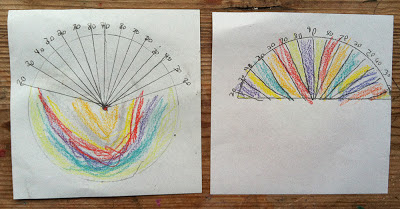 And there you have the story of the "Map of Angles".  We still haven't figured out how exactly I'll use them at the family night.  Also, I don't normally pay my daughter for school work!  But the combination of earning potential and being part of the family night in some way even though its too late and too far away for her attend was obviously a very inspiring and motivating context for her!

I can't really imagine this would be an interesting activity all on its own, but the results sure are pretty!
Posted by Malke at 1:56 PM