I've been thinking on and off about ways to help my seven year old daughter come to know, appreciate, and maybe even love numbers.  Geometry is easy for both of us because it's visual.  But because my math schooling was of the memorize and drill variety I have really had to stretch myself in order to make my daughter's early experiences with numbers more meaningful than mine were.  As it turns out, I'm learning a lot in the process and, as a bonus, I am finding that numbers are quickly becoming an unexpected but welcome gang of amusing little friends.

Since we're working on conceptualizing multiplication and division these days through various explorations, I thought it might be fun to make 'number cards' to visualize one number at a time.  Using coins (and clarifying their intent as reconciled in my recent post on units: When is a 10 Not a 10?) we looked at all the different ways to split 25 and found lots of remainders.  I suggested 60 after we read that base 60 was popular early on because it can be divided in so many ways.

As you can see, the results are less than inspiring and it's not clear to me that the child really learned anything more from making the cards in addition to the array work with the coins. 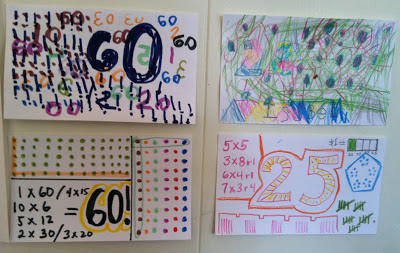 These cards are still taped up hopefully on the wall, but I had basically abandoned the project...until I saw this fantastic post  from an international school in France that re-imagined factor trees in the most awesome way.  Isn't this the most lovely factor tree you've ever seen?  And there are more -- all as beautiful as this one.  Their project in France has inspired us here at home and has become a perfect and flexible solution for our nascent number wall idea: 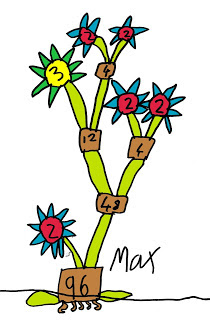 I showed the girl the post that inspired me and she was entranced and eager to get started.  She is doing well with hands-on and mental multiplication and division, but factoring as an activity is new to both of us and so I decided 20 would be a nice easy number to start with.

We took out the Cuisenaire rods and she found all the factors of 20 herself.  She double checked every rod from 1 to 10 and noticed a lot during the process, skip counting as she went.  "If I can use fours, I can use twos, too!"  "Threes...no that makes twenty one...." 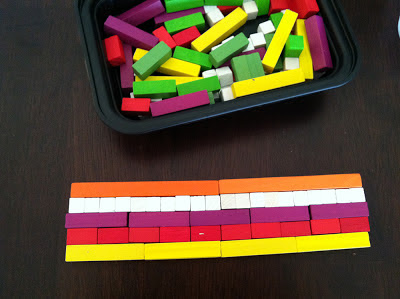 And then we wrote them out as equations and sketched a preliminary tree.  And here is where this activity became as important for me as it was for her.  I do not recall in all of my fourteen years of school mathematics (including those awful matching bumblebees in kindergarten, my tenth grade algebra D, my tenth grade geometry A, and a deliriously confusing semester of college algebra) ever learning about factors.  Ever.  So, it took me a minute, but I made it work.  (Oh, the things you do for your children!) 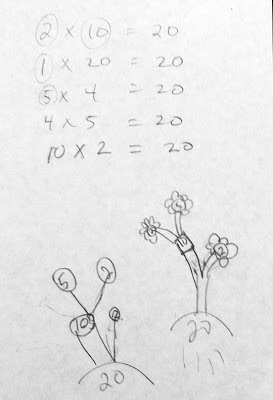 Then we got to work.  We drew and we drew and she whistled a happy tune (literally) for over twenty minutes.  She would not let me look at her work.  She was in heaven.  This is what she finally unveiled to me: 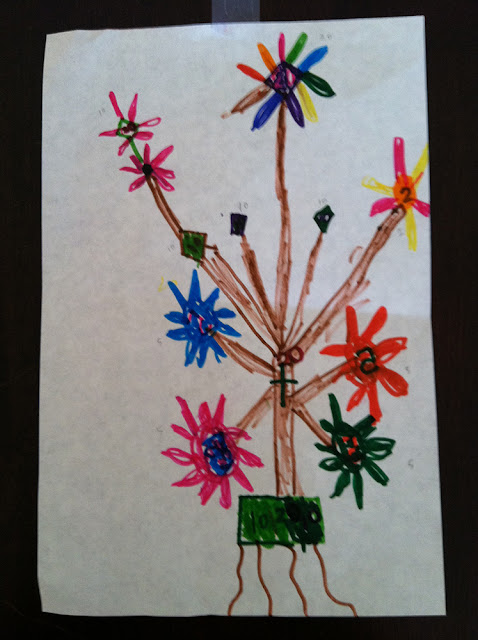 To me, it's glorious.  Even though it's not a factor tree, per se, it shows so much of how her 7 year old self is thinking about numbers, including an emerging understanding of factors.  All the numbers she wrote are obscured by the coloring, so I had to ask her about them.  At its base  are the numbers 10, 10 and 20.  Notice the overall symmetry of the tree.  The flowers at the base are 5+5+5+5 (do you see the 'plus' sign written on the trunk?) and, even better, the colors are inverted in each pair.  Moving up the tree, the next two longer branches on the outside are 2 and 10 (so 10x2) and the two small branches inside them are both 10 (so 10+10) and the crowning flower is 20!

This tree motif is doing so much more for her visualization of numbers than those little cards ever could!!  I'm so excited.

And, as a little bridge to future trees, after she walked me through her drawing I showed her mine.  I asked her what she noticed and what the differences were between the trees. 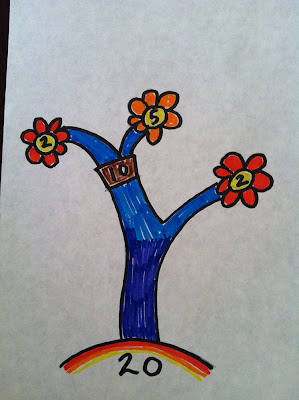 She noticed a lot, but not the numbers so I pointed her attention to the fact that although each tree split in different ways (10 and 2, 4 and 5), they still had the same prime flowers -- two 2s and a 3. (Did you notice I made each prime it's own color?  And I wonder if there are other ways to bring out the number properties beside just writing the numeral?) 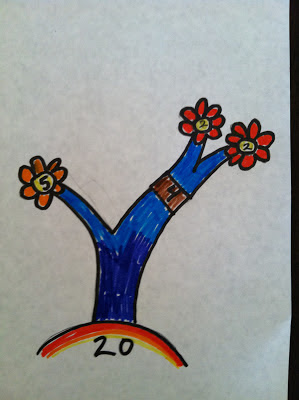 There is no need for us to rush into full-out factoring, but it is an interesting exploration and variation on the division we've been doing.  And, the introduction of another type of number, the primes, is an interesting development as well.  I think this is an approach that we will be able to use time and time again: create, observe, discuss, posit, repeat.

Let's see: trees as metaphor.  I've seen fractal trees, factor trees, and trees whose branches are the positive numbers and roots the negative ones.  There is so much potential in this kind of image/metaphor for number explorations through all elementary grades.  And, you do know that part of this approach is giving kids an empty piece of paper, some awesome pens and letting them create their own trees from the ground up, right?

I know one thing for sure: our number wall is going to be gorgeous!!  [Addendum: Here's what happened the next day.]
Posted by Unknown at 5:51 PM