At the start of any Math in Your Feet workshop I introduce the first big connection between math and percussive dance with two examples. The first example is basically just sounds coming out of my feet, nothing to order or organize those sounds.  If people want to call it noise I am not offended. Disconnected, random sounds are noise.

In the second example, I use similar feet sounds but organize those sounds into pattern units/dance steps.  I always thought it was fairly straightforward, but some recent feedback has indicated that not all my percussive dance novices can distinguish the difference between a dance step and a non-dance step. (Interestingly, more adults are perplexed by this demonstration than kids.)

After attending a Math in Your Feet teacher workshop in August, Christopher Danielson wondered "whether a characteristic of a novice is an inability to distinguish noise from pattern".

I think yes, across many disciplines, but Christopher's question also made me realize that this is really the hallmark of my teaching approach; I like anything that supports my students in making some sense of what might initially seem like noise and to support discoveries of structure and order that might otherwise go unnoticed.

I was at my daughter's school today for the second visit with her 3rd/4th grade class during math time.  Over the weekend I created a puzzle using pattern blocks and a isomorphic dot grid. As I tried to solve the puzzles myself, I had a thought that maybe they were too easy.  So, I tried it out with my daughter to see what, if any, challenge it could provide.  Turns out it was a just-right-challenge for her in some really interesting ways. Read the full post to find out how.

Today I was very curious about how other eight and nine year olds would respond. The goal of the puzzle is to use as few pattern blocks as possible to fill in the puzzle outlines.  At home it took my kid only a short amount of time to figure out the strategy of using larger blocks wherever she could; most of her efforts were focused on making absolutely sure she had the lowest score possible.

Today, when I introduced the puzzle the kids jumped right in.  As each of my three, twenty minute session progressed, I realized I was in an unique position to observe the moments when the noise started to become, well, less noisy.

To start, most kids used lots of little pieces during their first try at solving a puzzle.  Of course, some moved quickly toward an efficient strategy of using the largest unit (hexagon) as a way of minimizing the total number of shapes needed to solve the problem. The largest piece covers the most area, and then you can fill in around it.  First try fifteen pieces: 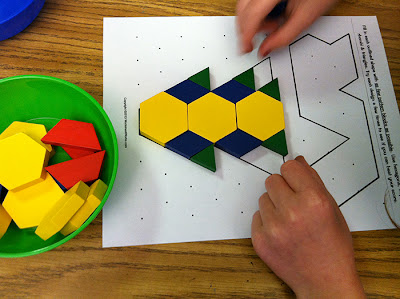 After the first try you look to see if there are any other large pieces that can take the place of smaller ones. Second try, nine pieces. 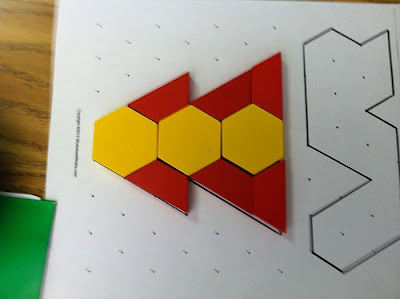 But many more kids started like this -- these two examples below show an ability to fill the outlined puzzle space but look at how many small blocks are used. 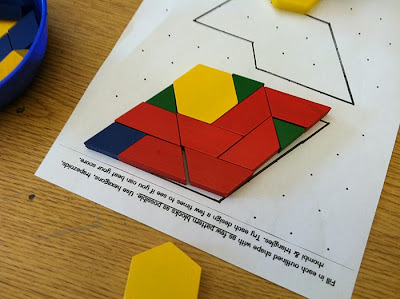 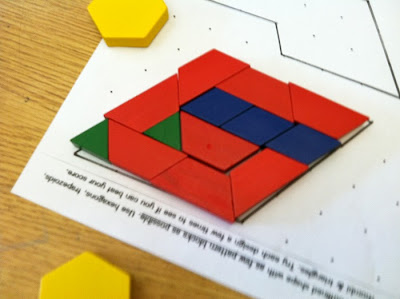 In cases like these I asked: "Are there any other, larger pieces that you can use in place of some of those smaller pieces?"  Sometimes they could see it, sometimes they couldn't. I especially loved it when, like the photos above, there were no clear visual clues as to how to go about substituting a larger piece (usually a hexagon or a trapezoid).  Sometimes I'd leave them be, and sometimes I'd casually pick up a hexagon and mention "Here's what I see...look how many smaller pieces this hexagon covers" while placing that piece on top of the others. 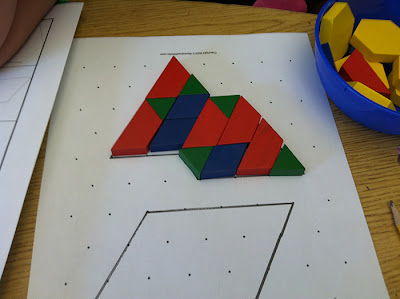 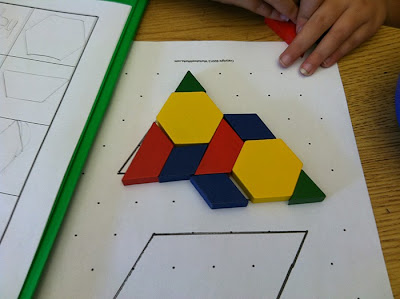 Some kids met the puzzle criteria and found elegant visual solutions as well (harder to do in the non-symmetrical puzzles). 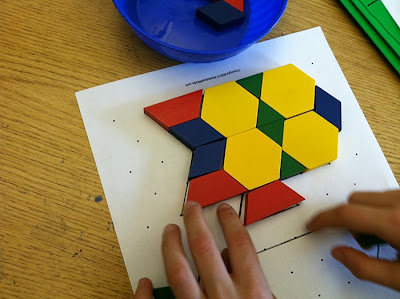 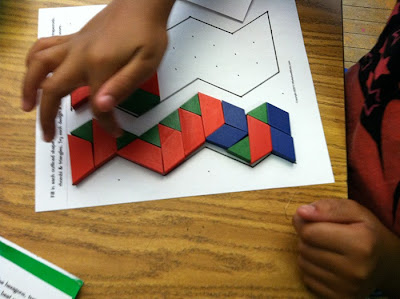 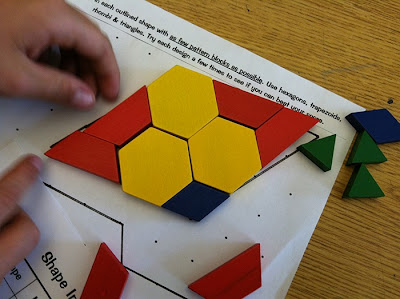 And this one had a complex narrative context which, given my experiences with my daughter, I completely value as a valid problem solving strategy! 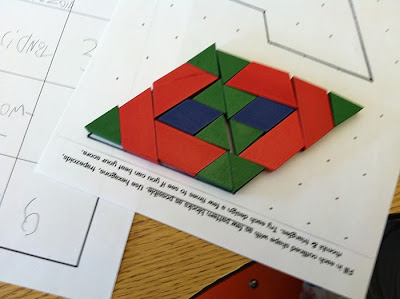 By the end of each session, most kids were on their way to identifying ways to merge the smaller pieces into larger ones which reminds me of the kind of thinking and conceptualization you need for both multiplication and division.

Ultimately, it's always a happy day for me when I see kids completely engaged in trying to figure something out!
Posted by Unknown at 8:09 PM