We are going to build a cottage.  That we can live in. 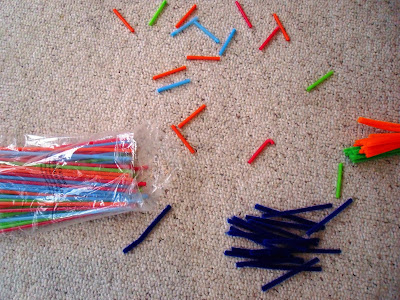 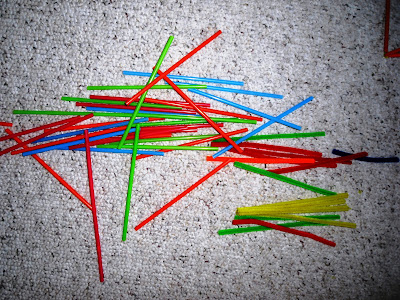 We are building it out of straws and pipe cleaners.  We started with one cube and attached another to it.  You should have seen the kid's jaw drop -- it was like magic.  And, did you know that after the first cube you don't need to make a complete cube ever again? 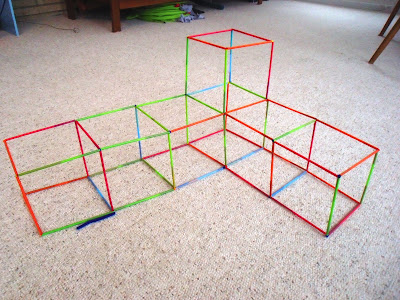 I quickly figured out my methods, but it was hard for my six year old to keep up with the precision.  To attach the straws use half a pipe cleaner folded at each end, then bend it into a 90 degree angle and slide the straws on. 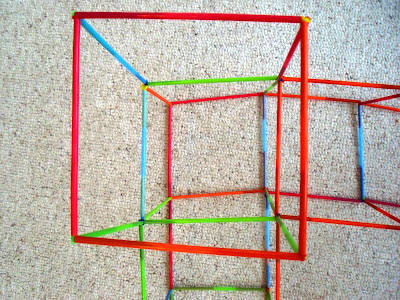 Unless of course you are attaching your cubes together.  In that case you make one folded end for the open straw, and slide an unfolded end into the attachment point. 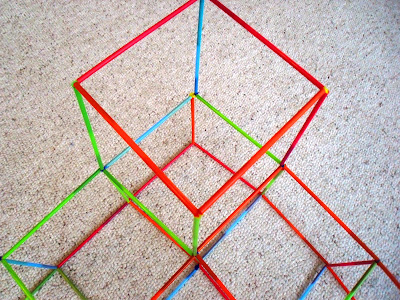 But that's just what I discovered and, honestly, half the fun was in trying to figure it out!  I suspect there are a lot of right ways to go about doing something like this.  If you decide to try building like this I'd love to see pictures of what you make!
In the end, the kid and I worked as a team for a while and then she left to rehearse her show which opens with the song "The Moral of the Soggy Hat" (an original number).  I imagine this building activity continuing mostly on mama power, but that's because I have ulterior motives. 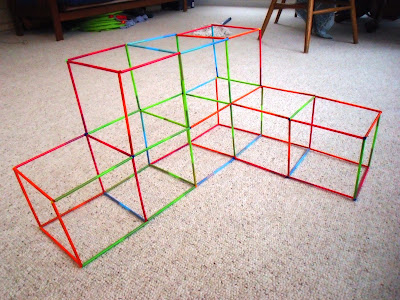 I get to do a ten-day version of Math in Your Feet this summer for some inner-city programs for kids ages 6-12﻿.  In addition to rhythm and pattern in the feet and hands, we'll be exploring what else you can do with a pattern unit, which includes building!  I can imagine, over two weeks, the older kids will have built something really cool.  And if they get really good at it, I might suggest trying to construct something out of tetrahedral units just for fun!  But I think I should try it out first, just to get a sense of what the pitfalls might be.
As for my girl?  She's all for building something she can live in, even if it's made from drinking straws. "But Mama,"  she said, "Will I have any privacy?"
Posted by Unknown at 10:58 AM