Given my daughter's resistance to formal lessons, it really was the perfect storm.  A supervised math activity of new concepts thinly disguised as 'something to do while mama makes dinner'?  Yes, please!

It came about as a sort of semi-premeditated accident: It was time to get dinner ready and there was a lot of prep work to it.  I had the mini-marshmallows and toothpicks at the ready, as well as buy-in from the kid who had seen this post of the amazing, huge, Serpinski-esqe giant tetrahedron built by the kids at Almost Unschoolers the day before.
I laid out some newspapers on the kitchen floor and poured the marshmallows into one bowl, the toothpicks into another.  Completely off the cuff I said, "Here's how you can make a square base, and then build up from there."  I built about one half of a cube and then said, "I really want to make tetrahedrons, but I don't have time now.  See what you can do."

The kid jumped in enthusiastically.  She started by making one cube, no problem. She added on another cube, then two more to make a four-cube base.  She built it up a level, and up a level again.


"I'm an artist!  I'm making a sculpture!  Let's put these piece under glass, like in a museum. It's marshmallow art."  Despite this enthusiastic chatter she was actually a little worried that the kids at Almost Unschoolers would be mad at her for copying their work. This led to some conversation about copying vs. learning the basics so you have the skills to express your own personal vision, and then, thankfully, our attention was diverted.
The tower/sculpture of cube units started to lean.

These marshmallows are tricky!  The kids at Almost Unschoolers made it look easy, but it's not!  There are all sorts of structural problem solving challenges to overcome. I suggested turning her 'sculpture' on its side (pictured below) so it would be a little more sturdy.  We counted how many cube units made the structure. 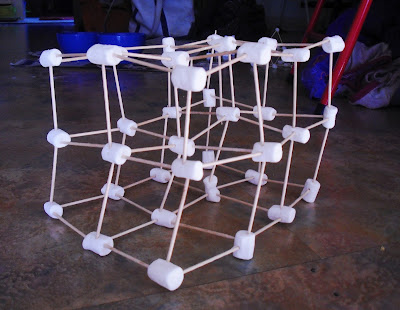 When she was done, thinking toward my goal of tetrahedrons, I casually mentioned she might try a triangle base.  After some experimentation she started making this: 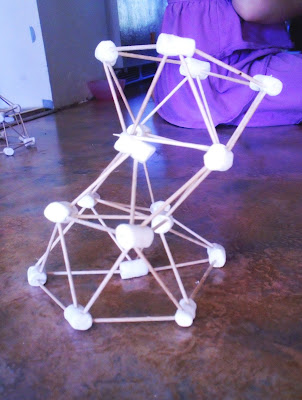 It has an interesting twisting quality to it and is my personal favorite of all her 'marshmallow art' pieces.

By this time, dinner was in the oven and I had time to experiment myself.   I made a tetrahedron, then attempted a larger one using four tetrahedral units.  It was a pretty strong structure, but only after I figured out that if you're going to connect the tetrahedral unit patterns, you need to share the same marshmallow where the vertices make contact.  (An aside: Spell check said that is was 'vertexes' instead of 'vertices'.  What do you think?) 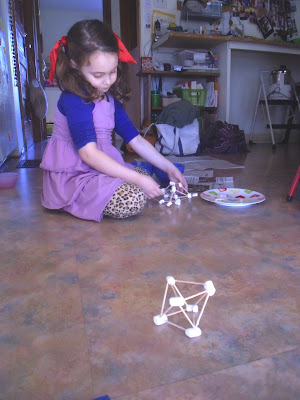 She worked on another sculpture and then...lo!  The girl created a tetrahedron of her own, then played around and discovered, on her own, how to create an octahedron!

The picture below shows all of today's creations. The 'sculptures' which she created first, are in the back row.  The geometric/platonic solids, created at the end, are in the front.  What's interesting to me, in terms of my daughter's learning process, is that it is more apparent than ever that she really wants to explore and discover new things on her own first and then, when she's had her fill, she comes more easily and willingly toward 'the point' of the lesson. 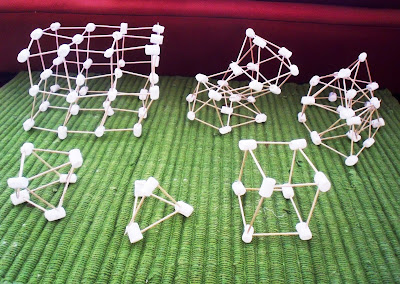 Whatever you call this afternoon's explorations it was a fun, full hour of inquiry.  It was also the first time, except for origami, that I've willingly pushed us into 3D math.  I'm learning right along with her, and it's an amazing journey.