I've been watching my six-year-old daughter explore math all fall and now into the winter.  At the same time, I have also been reading books about how K-2 kids learn math, and growing my own 'math eyes' (as Maria Drukova of Moebius Noodles and Natural Math says).

It's been fascinating to watch my kid's understanding of numbers develop over the last six months, even with a somewhat hands-off approach. She started this summer with a lot of comparing and measuring.  Then she started asking lots of questions about numbers and shapes, mostly on her own time.  Sometimes I'd be there during the process, as in this line of questioning about dividing a number in half.  Other times I'd run across the results of her thinking later in the day, as with a geometric study she initiated with some tangrams.

There's a book I've been reading, a few pages in bed each night before I turn off the light.  It's called Games for Math: Playful Ways to Help Your Child Learn Math from Kindergarten to Third Grade, written by Peggy Kaye.

In this book, Peggy shares all sorts of fun math games that require no more than some paper, a pencil, some dice to roll, tape, egg cartons, beans...you get the picture.  The best thing about this book, besides the very easy-to-implement, high-interest games is how she puts the games into context with stories about working with specific children.  I really, really like 'hearing' her have math conversations with children; the activities are pretty simple but the important thing is how she models mathematical reasoning and problem solving strategies while she plays the games with each child.

My favorite games so far are Star Count and Lots of Boxes.  Both involve a pen, some paper, and a die to roll and both focus on understanding groupings of  numbers as a way of practicing counting and introducing multiplication at the same time.  My kid has been asking questions that show she is thinking multiplicitively, but she is not quite ready for or interested in sitting down to discover the patterns in the multiplication chart, so these games are perfect for her right now.  Also, How Many Boxes is also a great introduction to perimeter and area since it is played on graph paper.

A couple weeks ago the kid surprised me with some spontaneous backward counting from 100.  It was wonderful listening to her find enjoyment in figuring out the pattern, but I didn't really understand the importance of this new skill until last night.  That's when I read a section where Peggy Kaye talks about the kinds of number skills kids need to have to learn how to add and subtract.  These include:

My kid has been spontaneously skip counting since the early summer, and counting forward for longer than that.  In terms of the girl's new penchant for counting backward, it seems this new skill of hers is really important for mastering subtraction, something we haven't done a lot of.

What she and I do do is a lot of adding numbers together with daily UNO games but, just today, the whole 'adding up the UNO score' activity seemed like it had lost it's challenge.  When I lose, she whisks the cards over to her space, spots the tens easily and without prompting, adds up 10's and 20's without pause, and takes the extra cards and finds a final total.  Sensing a turning point, I suddenly had an idea for another way to challenge her.  Here's my new thing:

Instead of adding up the numbers, take all the cards you've won from your opponent and use them as digits.  The object?  Make the absolutely largest number you can.  A five and a one can make 15 or 51, for example.  Or, there's this hand I lost to her this afternoon:

Ha!  It's probably the largest UNO score EVER!!  And, it's a great way to introduce hundreds, thousands and millions as well as 'which number is biggest' on the grandest possible scale.  The cards become great manipulatives, so once she gets comfortable reading the numbers I've made (while modeling my thinking process), she'll get a chance to figure out how to move them around to make 'the biggest number' she can.

But back to counting backwards.  I don't really understand my child.  She is quite independent in her learning, and often resistant to formal instruction.  But she really likes it when I give her spelling tests!?  And, today, when we were at the library, she asked me to give her a math test.  Um, okay.

I eventually obliged and put together a list of equations.  As I've said, we haven't done much in the way of subtraction, so this little test was actually a good way to assess where she is right now.  Plus, with my new understanding of counting backwards?  Wouldn't you know it -- there she was counting backward to figure out the answers! 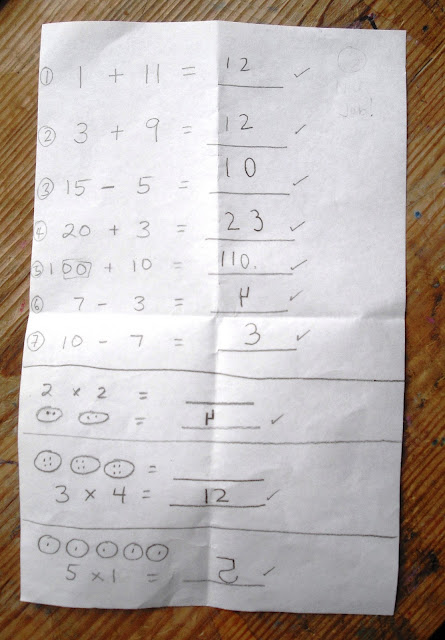 She also wanted some multiplication problems so I used a strategy from Peggy Kaye's Star Count game to illustrate each problem.  "Two groups of two", "three groups of four", "five groups of one" are the way we say it.  She got her answers by counting the dots, but I can imagine if she keeps this up we might be ready for coloring in the patterns in the multiplication chart by spring.  I really want to do square and triangular numbers with her using visuals but, as always, I just need to be prepared to jump in with it when there's an opening.

In closing, as I was in the process of wrapping up this post, the kid wanted another math test.  I learned a lot from seeing how she answered the questions.  Next time I'll put the addition, subtraction and multiplication problems in their own sections, not all mixed together.  But the biggest thing is that I'm going to get the Cuisenaire rods out again so we can solve the subtraction problems together for a while. 30-2 was just a little too big of a 'problem' for her, but if we can look at it with the rods I think the idea will click into place without much fuss.  My final lesson?  Math is definitely a morning thing.  No more math at 5pm!

[Edit, 1/26/12: Here's what happened the very next day with the subtraction and the counting backward.  When it rains, it pours.]
Posted by Unknown at 6:51 PM