The doorbell rang.  The kid immediately jumped up from her lunch and launched herself at the front door, yelling "I'll get it!!  Maybe it's something for me!!!!"

Yes, lunch time is around when the mail is delivered at our house.

I called after the fleeting figure, "It's probably for me. It's my Christmas present."

"What do you mean, for you?" the girl asked, incredulous.

"Oh, you know, Grandma sent us money for presents.  I've already bought the presents she wanted you to have.  She gave me and Papa money too so we could buy presents for ourselves," I countered.

We opened the box  She looked curiously at the two little packages.

"One of them says Crystal the other says Flora, " I said.

"Okay, let's see what they look like."  I opened up the Crystal pack and laid out each card one by one.

"And, look!  There are two colors on each card, one on each side."  I took a few and started layering them.  "What if I put this one on top? And then turn it?"

"Oooohhhhh!" we both squealed. 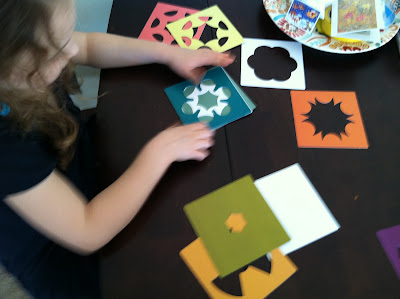 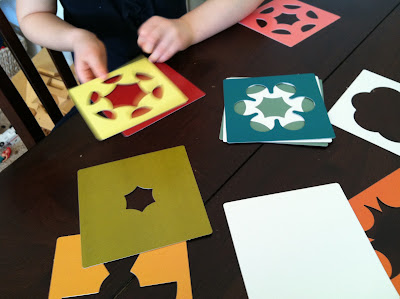 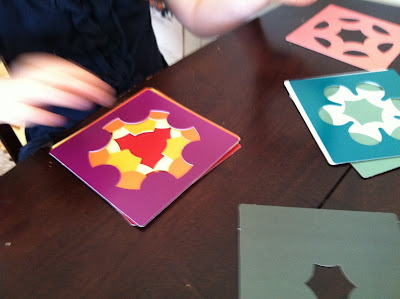 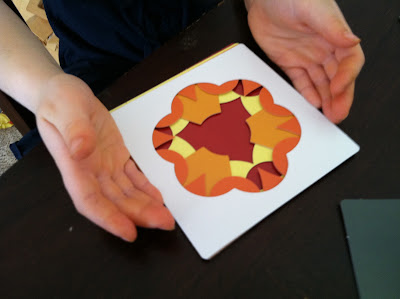 I purposefully did not buy Kaleidograph for my daughter.  I thought about it, but after many, many months of being called "math mommy" in an accusatory tone, I decided that these could be my special toy.  Given her enthusiastic response, though, I guess I'll let her keep using "my" present whenever she wants!

I loved playing the Kaleidograph game online, but I wondered if the hand-held version would differ.  Both Kaleidograph sets are lovely to handle and look at, and might be fun to trace onto paper as well. I'm glad I went ahead and bought the physical version.  Even if it's not really mine anymore!!
Posted by Unknown at 1:55 PM