I've finally succeeded in bringing my daughter (age 7.5) completely over to the mathematical stars camp thanks to this post at The Crafty Crow called "Woven Cookie Stars."

My daughter is (in)famous for knowing her own mind and possessing very firm opinions about what interests her.  More power to her, I say, but it's required some flexibility on my part.  Over time I've been most successful in influencing her interests when I engage in my own colorful math related projects and 'just happen' to leave some scraps around for her to work with...if and when she so desires.

It was in this environment that I embarked upon our mathematical star inquiry this summer.  The details of this journey can be found in my Seeing Stars post, but I will quickly point to the picture below as evidence that although she often feigns disinterest in the 'math-y' things I do, her mind and heart are still permeable and receptive to the beauty and complexity of math, including stars.  Here's a picture from the child this summer showing her thinking about how stars are structured (explained by her in the post Plant the Star Seeds, Watch them Grow): 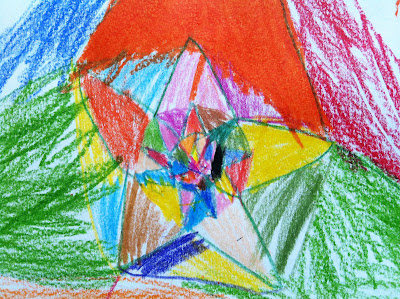 We really haven't done much with stars since late August.  I was stalled after a lackluster experiment with 'spinning' stars around nails; the whole thing was just too futzy.  But when I saw Crafty Crow's post I knew it was the answer I had been looking for.

I have lots of cardboard lying around.  I have scissors.  I have spice jar lids to trace.  I have embroidery floss.  My daughter saw my first efforts last night and immediately had to try it out herself.  She used up the only sparkly embroidery floss we had on hand, so today we went to the craft store and she chose her own thread -- sparkly gold and purple and some lovely shades of green. When I said I wanted to take a picture of her stars, this is how she arranged them, in all their glory: 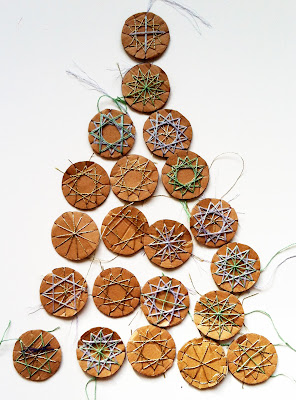 Mathematically speaking, she's figured out a lot all on her own  Her stars are all variations of twelve-pointed stars (12 stars).  She started by wrapping thread around the circle, sort of randomly.  From there she very quickly figured out how to make her favorite star, the six pointed star she calls "the Jewish star" which is created using two overlapping equilateral triangles.  She made about twenty of those, and the last ten were completely uniform.  I encouraged her to see what would happen if she made two more triangles on top of the 6 star and lo!  There was a 12 star that echoed her work in the activity I developed for her, described in the post Stars, Factoring and Patterns. 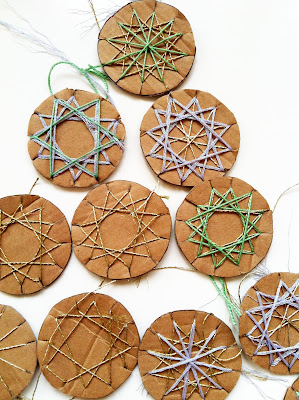 I also encouraged her to try and make an asterisk star and wondered what it would look like if she used a combination of colors.  I really wish I had her aesthetic -- her stars are so gorgeous.

Here is what I was working on while she followed her bliss.  Initially I wanted to see how many 12 stars I could make which led me to play around with layering one color/version over another.  On the left are set of {12, 5} stars, one in each color.  The next column is a {12, 4} star combined with an 12 asterisk.  I think I like the one on top the best.  The final row (far right) is my least favorite but still pretty.  It's a {12, 3} star (see the squares?!) with a thick asterisk. (Here's more about notating stars.) 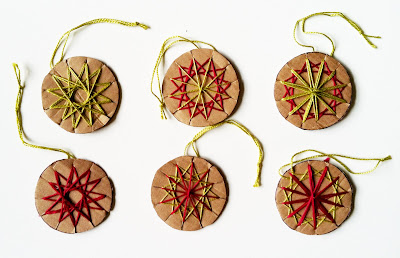 Every time I finished a new version or my daughter tried a new color to overlap the sparkly thread we ooooohed and ahhhhhhed.  It was a delightful morning, to say the least.  Just for fun, I experimented with a 16 star.  A little too busy for such a small space, but I do like the the one on the left.

And, although most of my time was spent trying to keep up with my daughter's demand for "more circles!" I still had time to experiment with a snowflake feel.  'Cause, you know half of twelve is six and six is a snowflake.  I want to come back to this soon.

So, by now, maybe you're itching to get started.  Remember, all the instructions are at The Crafty Crow.  And, remember, both my daughter and I got started by just playing around with the materials. Our first two or three tries each were quickly discarded but the process was incorporated into these darling beauties. Have fun!
Posted by Unknown at 10:38 PM