It was "Math with Malke" day in my daughter's 3/4 class! This activity was inspired by Simon Gregg's ongoing Cuisenaire Rod work with students; it was one recent conversation in particular about some "faces" that had shown up during one of his classes that got me thinking.

Because the kids' exposure to the C-rods was limited, I wanted to give the third and fourth graders a short intro to the rods before presenting the project.

I built a sequence of simple investigations that led up to the big challenge. Kids were split into (semi) random pairs; each group got a bag filled with a random amount of C-rods. I asked them to open the bags and find one of each color.

While they were sorting, I noticed that the groups were naturally ordering the rods as they went through their bags. I paused the class to have everyone look around the room at how others had set out their 10 rods. We did a quick list of our noticings:

- 1 cube different between each
- Different sizes

To give them some tactile experience with the lengths/amounts of the rods I had them pick up white, red, light green and yellow rods and put them behind their backs. They faced their partners and gave a series of commands: "Show me...green!" "Show me...white!" 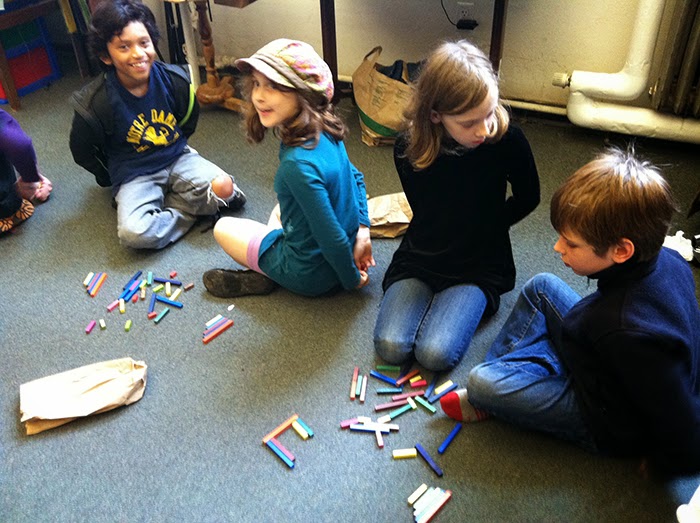 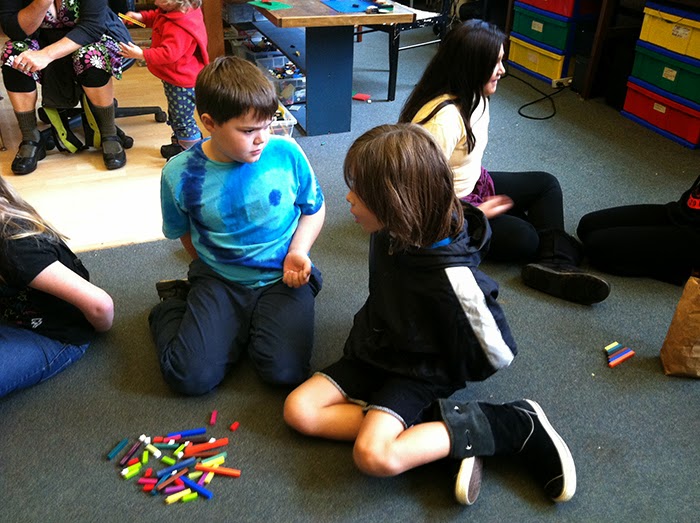 As a final introduction before the face making I modeled adding the rods together, white to orange. Then came the challenge!

That's it. Off they went! Some groups added as they built and found a need for paper and pencil to keep track. 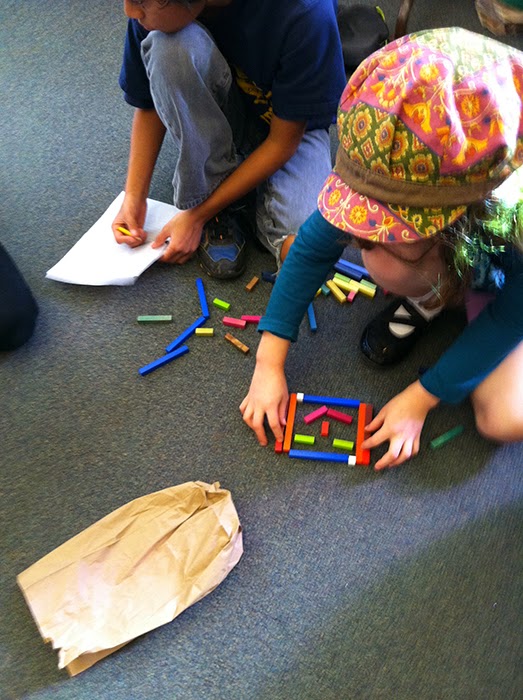 Some kids went immediately for the tens which made for easier counting. 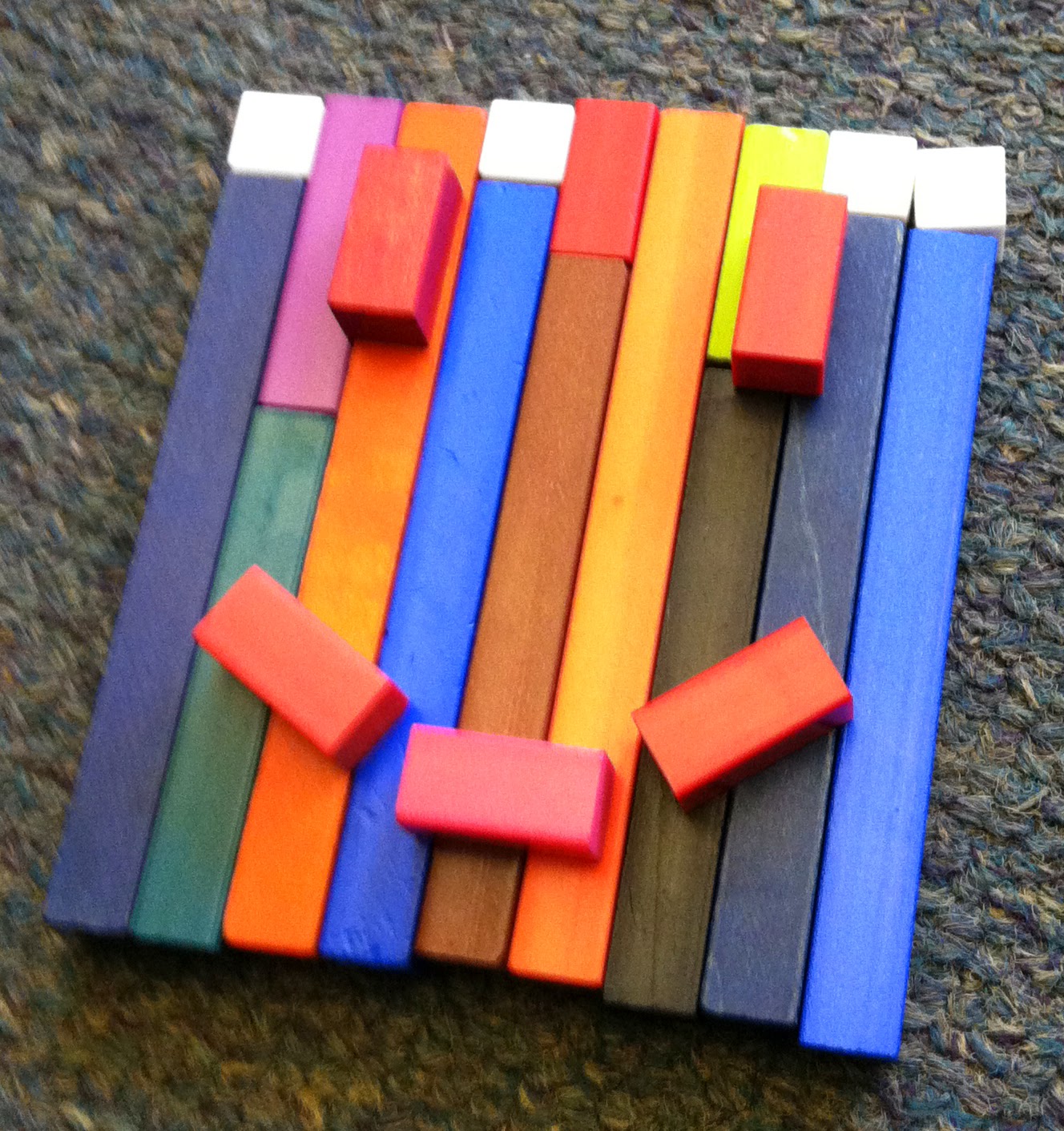 Some kids built first, counted second and added or subtracted rods as needed. 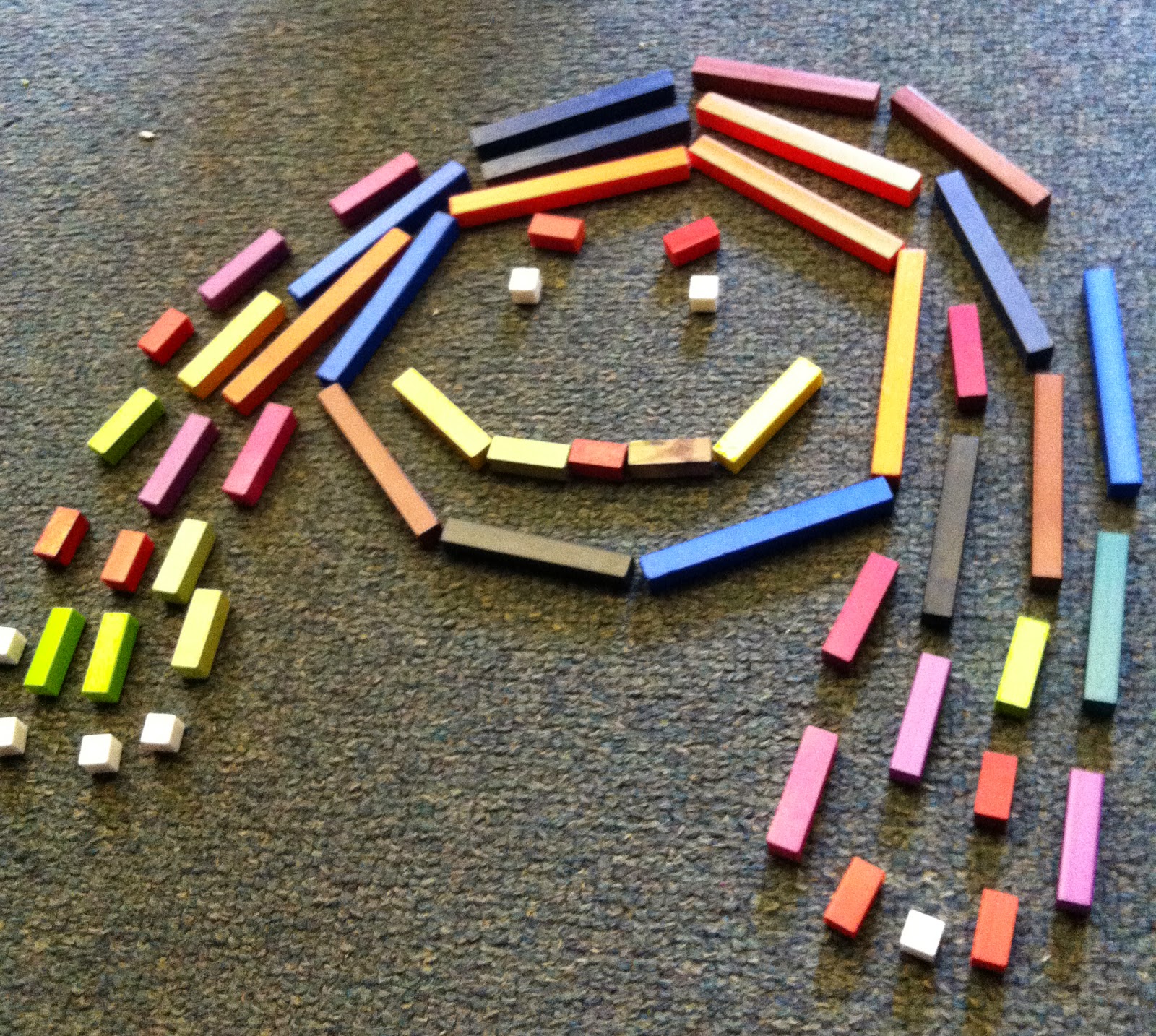 Some faces were closed (all rods touching), some were open. 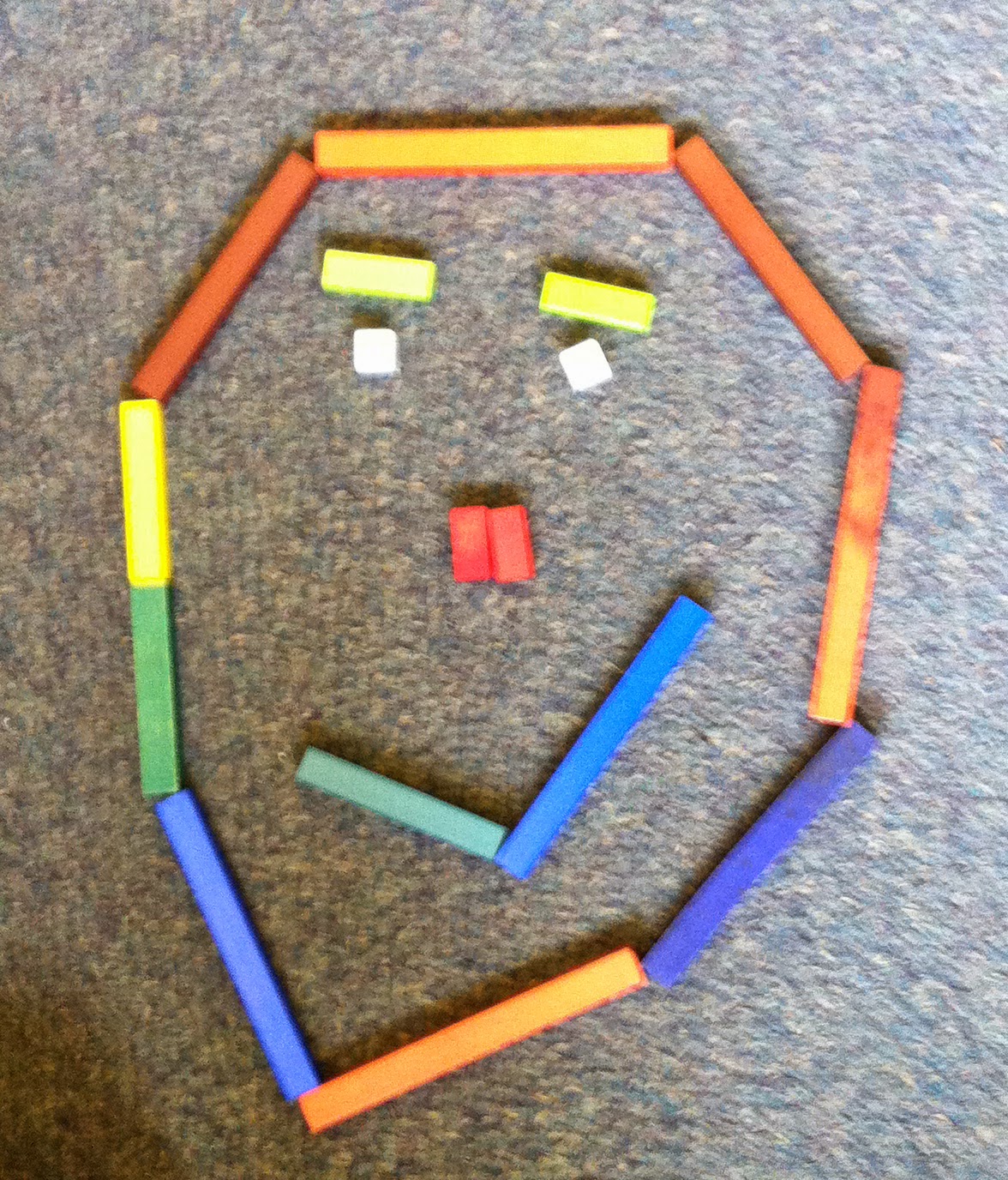 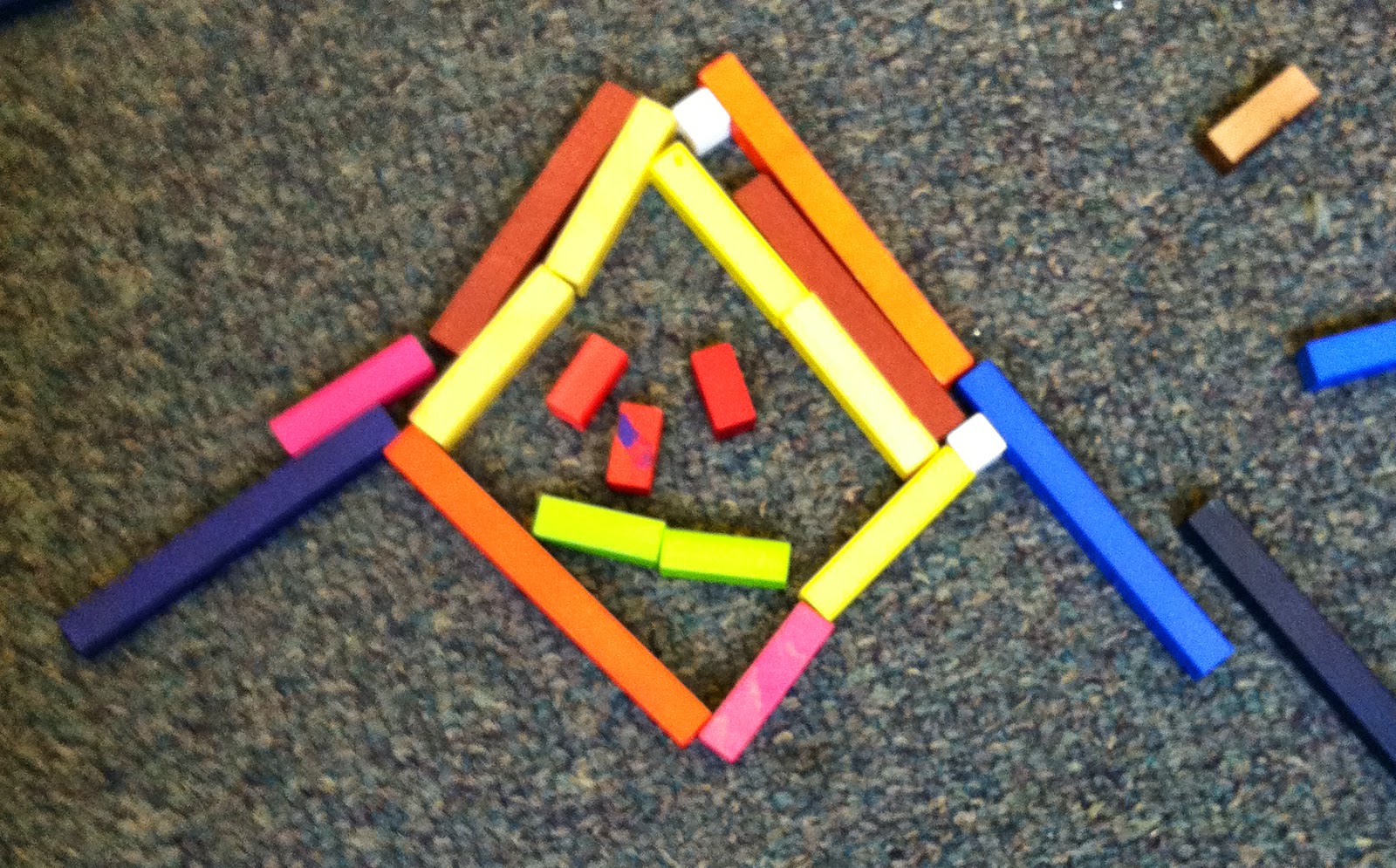 Then it was time to pause for some more noticing:

- Some people built and then counted

And the final challenge! Make a second 100 face different from the first. For example, if your first one was open, find a way to have all rods touch each other. If you had a closed face, make an open one.

Constraint #2: No matter what you do, the face needs to be balanced like a human face.  I illustrated this step by step on the board. [And, yes, I know that a human face is naturally balanced, but I wanted to make the idea explicit. It's one thing to see the balance/symmetry, it's another thing altogether to actually make it.] 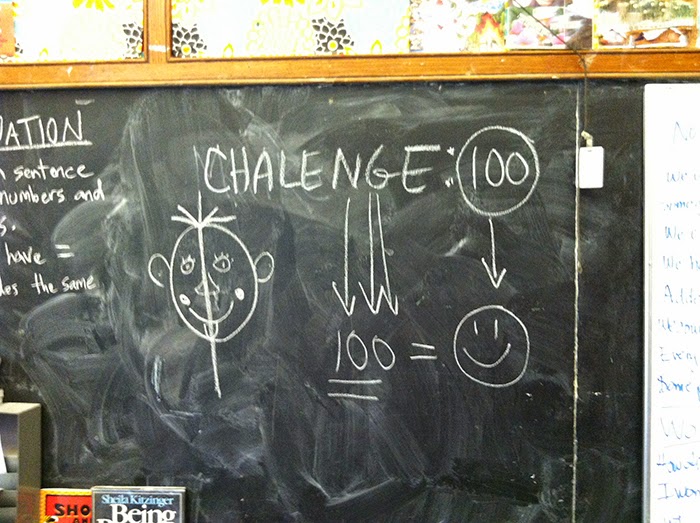 When everyone was done with face #2 I said:

"We’ll go around the circle and you can tell the group just a little bit about how you made this particular face.  What changed about your strategy from the first time you did it? Was there something you had to do differently, something you guys talked about that was a challenge while you made it? Or something that came to mind while you were building it."

Here are few of the conversations we had: 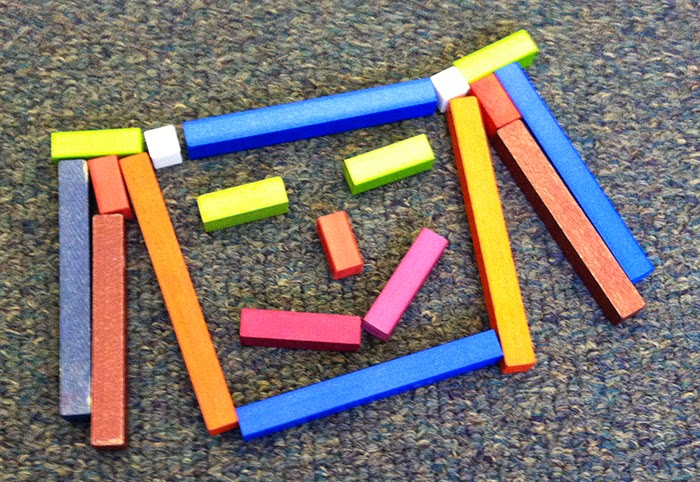 Group 1:
Girl: We started by just making a symmetry face and then counted them up and figured out we needed 24 more. So then we basically just added the hair with 24. Then it wasn’t perfectly symmetrical so we kind of made it the same on each side.

Me: And did it add all the way up to the hundred or did you get close?

Girl: It equals to the hundred.

Me (to boy): Is there anything else you want to add?

Me: I saw you put the pencil down [the middle of the face). Want to show them what you did? [He puts pen down the center.] Do you see that there’s a red on each side, an orange on each side?

Group 2:
Girl 1: At first we had a round face and we had eyes, a nose and mouth in it. But this time we made the background of the face ten each so we have 90 here and then we used twos to make the face. 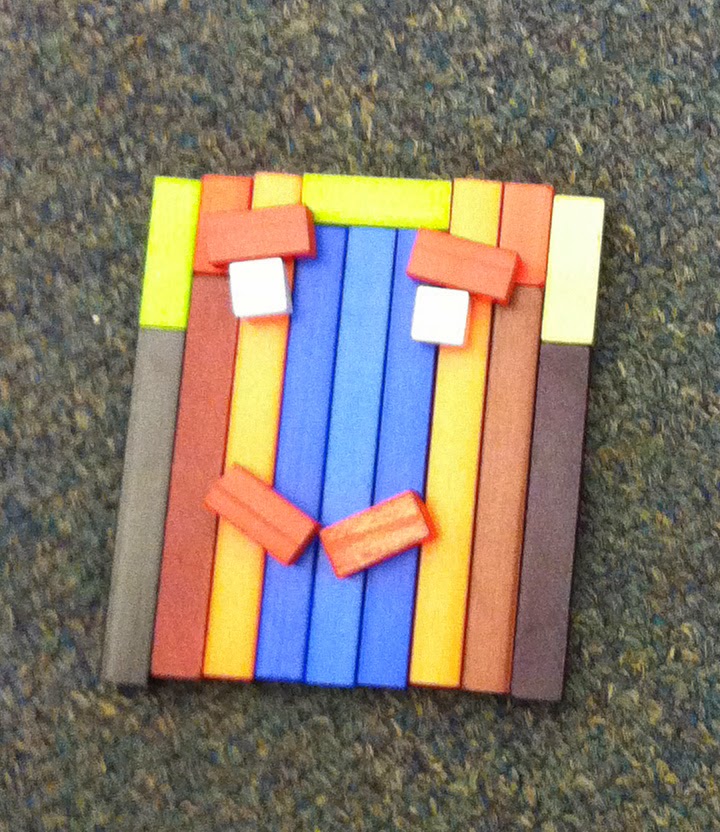 Group 3:
Girl 1: Our first face was open and then we made another face but then Malke told us to use smaller pieces…

Me: [Laughing] Because why? Why did I give you that challenge?

Girl 1: Because we finished only using 10s, 9s…and the last face wasn’t as symmetrical. So we decided to do four browns in the middle and two blacks on either side. But then if you counted them up there was only 80 on the bottom.  So what we had to do is 4 + 4 is 8 plus 2 is 10 so we could only get up to 90 and if you let us use the 10 we could have made feet.

Me:  [Laughing] But that’s the thing, you have to work within the limits. 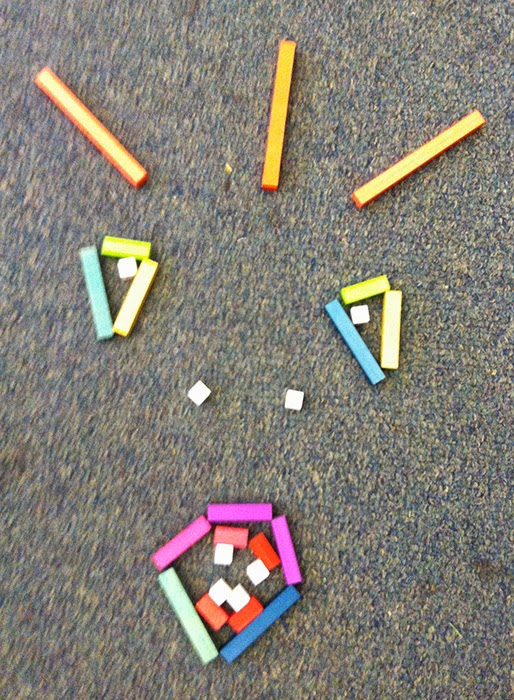 Group 4:
Boy 1: Well we started off again with a round face but then…

Boy 2: But then he was already making this other face on the ground and we just added some more to it.

Boy 1: One of the newer things was we took away the triangular nose and  put in these two [white blocks] and we added these red things.

Boy 2: Mmm hmm. We got hair and you can [to other boy – can you hand me your pen? Thank you…laying the pen vertically down the center] it actually does go down and there are two teeth and two red things on either side. 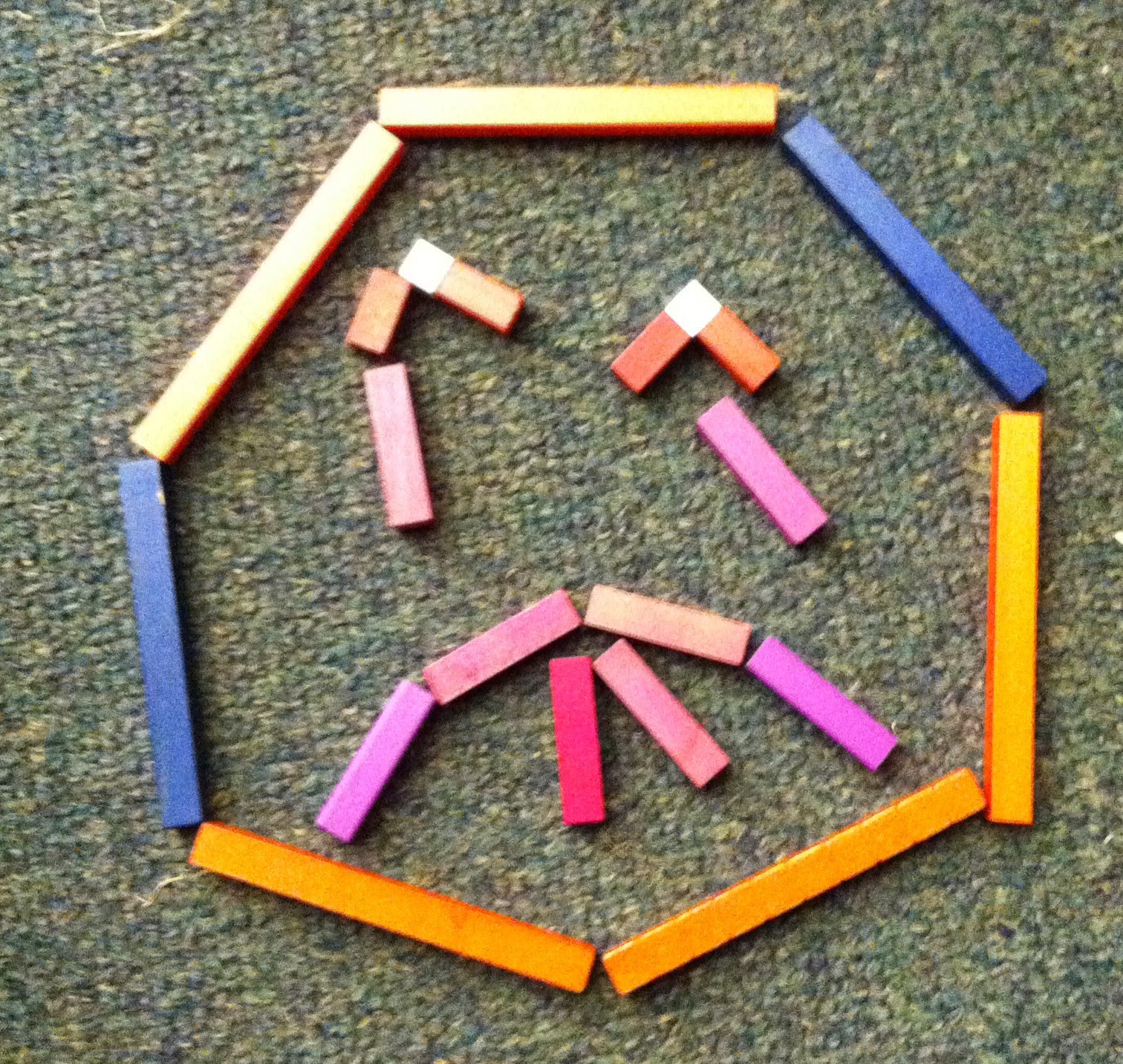 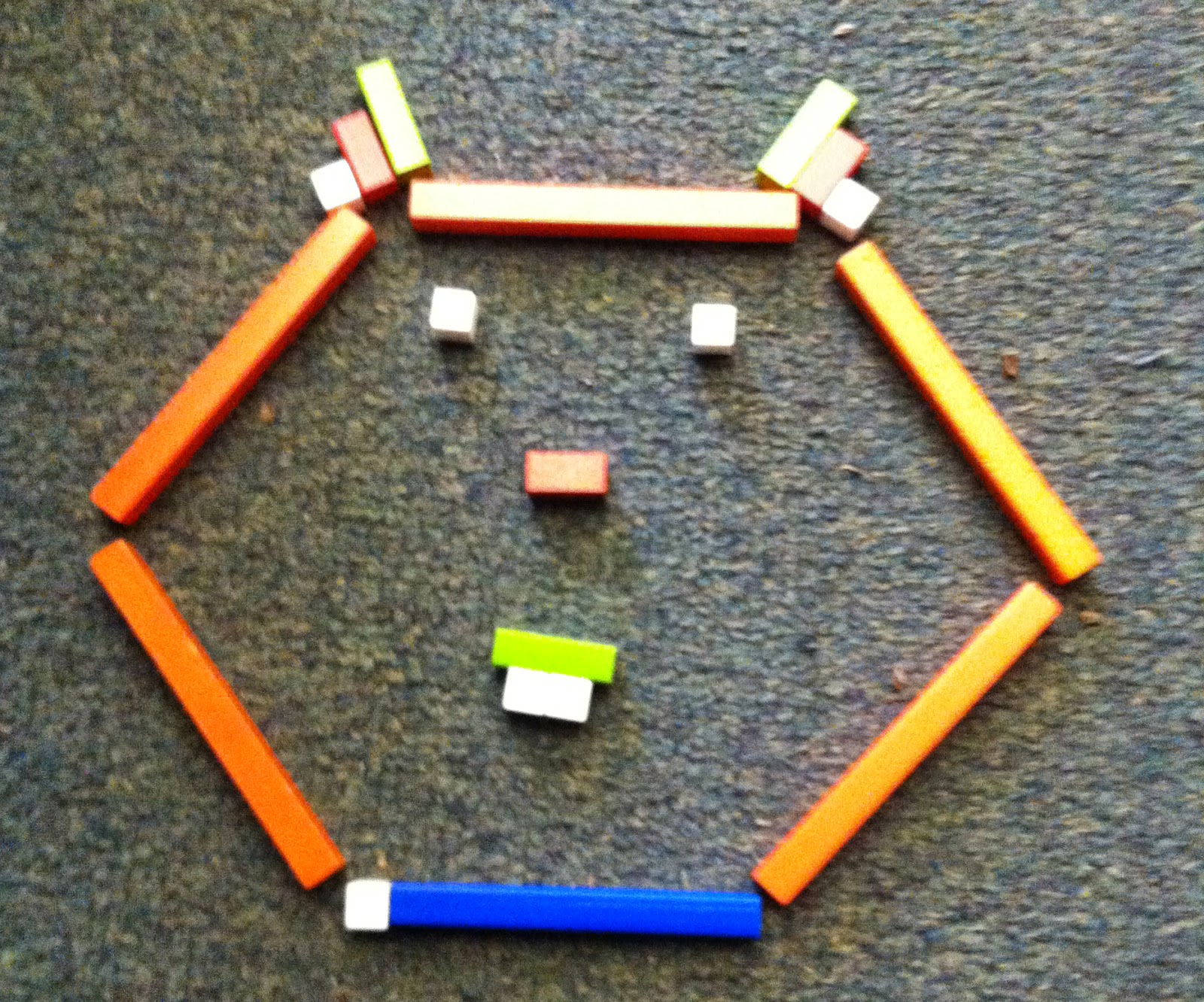 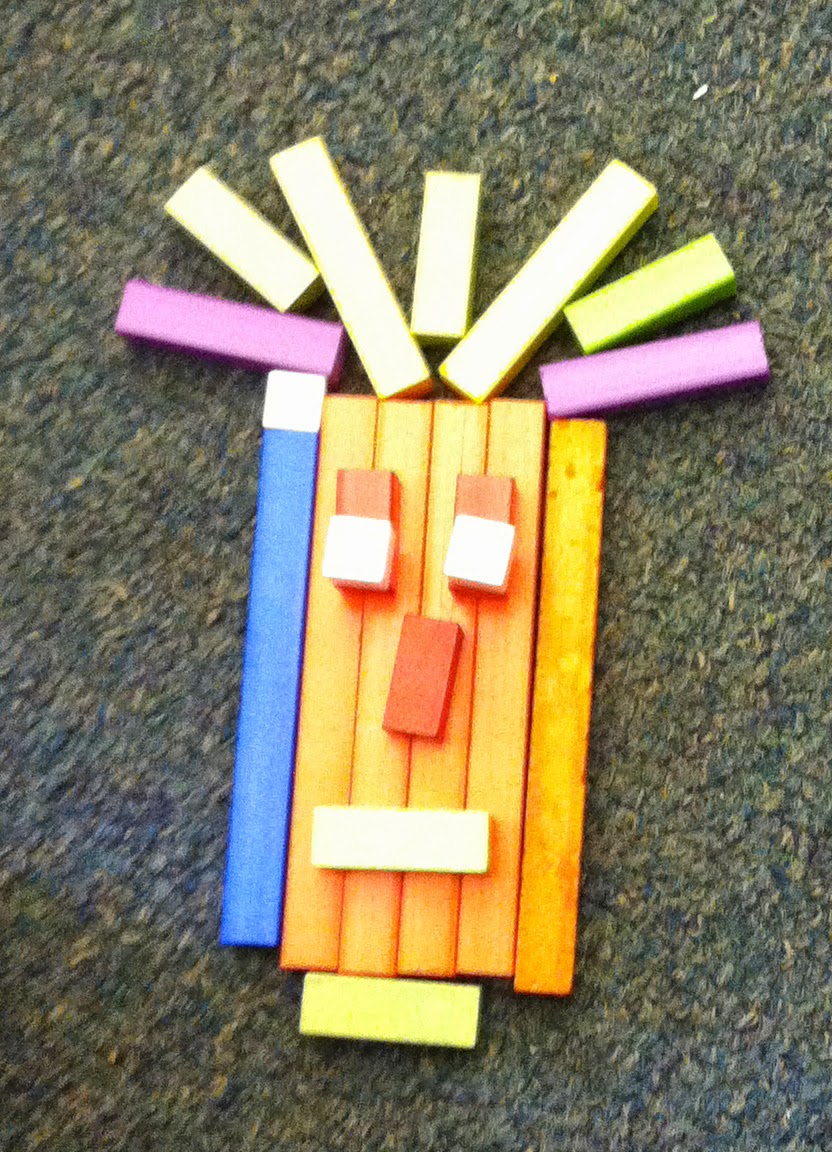 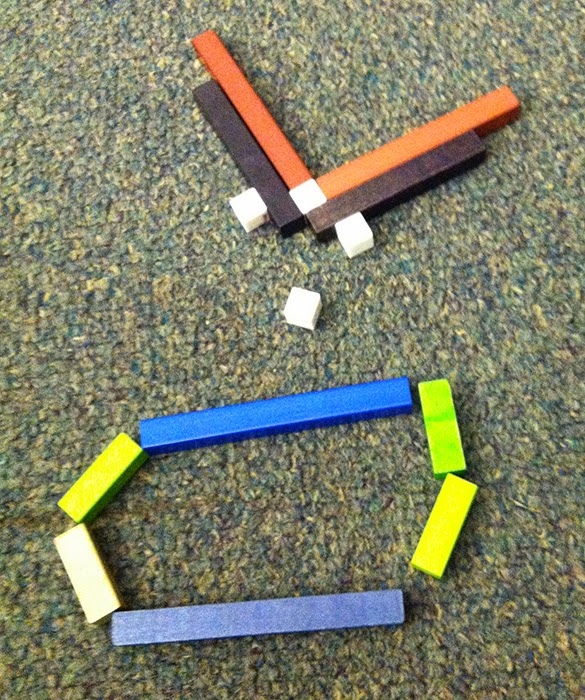 The conversation reveal thinking about sameness and differences and emergent thinking about symmetry and balance. The teacher and I were both extremely happy about the activity, engagement and conversations in the individual teams and the class as a whole.

Next time I want to be make the constraints well, more constraining, like: "use only rods one through six."  I think this would also be a good to do again with this same group so we can deepen and extend the idea of balance.
Posted by Malke at 12:43 PM 3 comments: 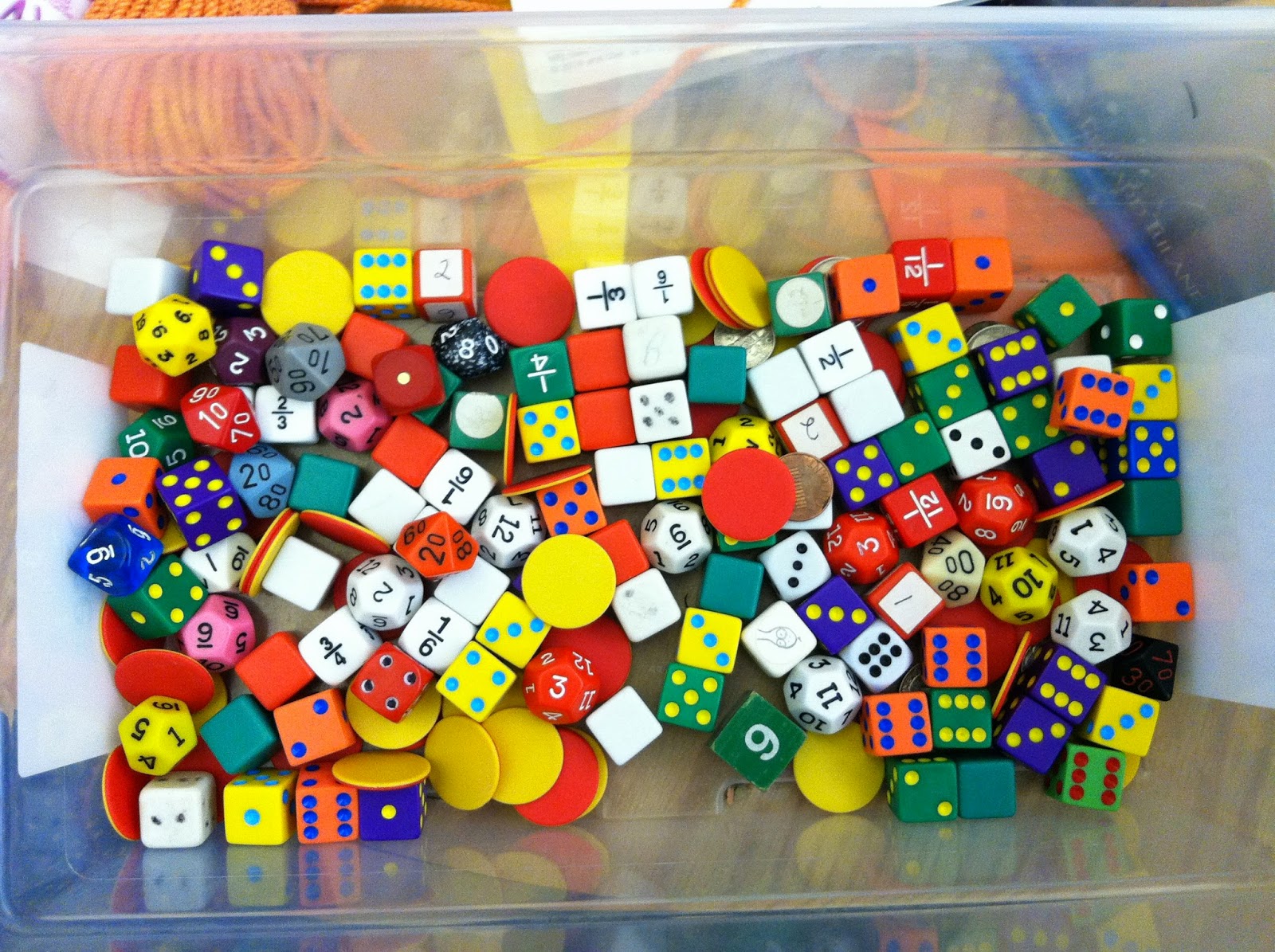 There's a K-6 class (20 kids total) at my kid's school and I know their teacher Jen is always looking for activities that are adaptable for this wide age range. Plus, she's game for just about anything! That's why, when I came up with a variation on the "Race to 100" hundreds chart game the other day I just knew her class would be the perfect testing ground.

Race to 100 (or whatever other number you choose) is essentially adding or multiplying three dice then flipping a coin to determine whether you have to halve that number (tails) or double it (heads).  When I tried out the basic rules w/ my 9yo she got bored quickly which made me wonder what *could* keep a kid interested in playing?

It was fun to hear this afternoon how Jen's class took the game and ran with it -- so many different rules and variations!

Below is Jen's write-up on her class blog (password protected) of all the wonderful adaptations her class came up with on their first "roll" through the game.  She's going to do this again next week some time, so stay tuned for the update!


Today the kids played variations of dice/coin flipping games.  I gave them a basic idea of how they COULD play and it was up to them to come up with the rules that fit their ability.
The Basics:  Choose three dice.  Add or multiply them in any order.  Flip a coin.  Heads means double your answer.  Tails means half your answer.  Add your score.  First one to 100 wins.
They had choices in dice as well:  your typical 6-sided dice, 10 sided dice, 12 sided dice, and we had one 20-sided dice.  As I walked around, here are some of the rules they made up:
K and B were multiplying a 6-sided dice, a 10-sided dice, and a 20-sided dice.  They flipped the coin:  doubled their total if heads flipped, halved their total if tails flipped.  The originally planned to play to 1000, but changed is to 3000 after B won too quickly.
A and O were adding a 12-sided dice, a 12-sided dice and a 6-sided dice.  They decided that if heads flipped on the coin, they would add 1.  If tails flipped, they would subtract 10.  They added a rule that said you should subtract 20 if your dice total was more than 10.  They played to 100.
M and C were adding their two 12-sided dice.  For the coin, heads meant +10 and tails meant -10.
Z and E added 2 6-sided dice and then multiplied their answer by a “multiple of 10″ dice.  They played to 1000.  Coin flips:  heads +10, tails -10
S and L added 3 dice (2 six sided dice and one “multiple of 10″ dice).  Coin flips:  heads x2, tails divide by 2.  They decided to play to 900.  L was having bad luck though.  When I asked how, they told me that he kept having to divide his answer because he kept flipping tails!!!
L, E, and A were playing with three dice, but the third dice, a “multiple of 10 dice” only came into play if someone flipped heads.  Apparently on E’s first turn, “she got to add 90 to her score!!!!”
The Littles played as well, rolling and adding 2 6-sided dice.  Flipping coins with heads meaning +1 and tails meaning -1.  They played to 100 and used a hundreds chart to keep track of their score.
Posted by Malke at 5:25 PM No comments: