...then the girl (newly seven) will want to make a game out of it.

When the girl makes a game out of it she'll be really busy for a few minutes and then make her Papa play the games.

When Papa plays the games, it will be interesting to see how the girl is thinking about math.

And when the girl thinks about math, she'll need a grid to go with it!

(But, in this case I didn't so much give it to her as let her find it and watch her co-opt it for her own uses, just like what happened with her 'divide even numbers' grid game a while back.  And, you do know that this story is jamming off the awesome If You Give a Mouse a Cookie stories by Laura Numeroff, right?)

The reason the grids were out to 'be discovered' is because I'm in the middle of fine tuning a paper quilt-ish activity for my summer arts programming in the city.  It's a really cool project, if I do say so myself, and I'll be sharing the concept and the student work when we're done with the week.  In the mean time, here's what my kid did within a ten minute period, all before 7:00 am, I might add:

The first game she made for her dad was a word search.  Apparently one of her babysitters brought a book of word searches with her one day.  Or something.  In any case, it stuck with her: 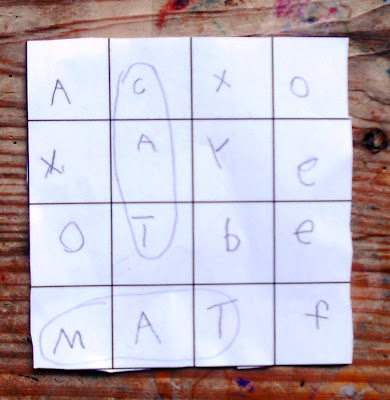 In the next game, the question was: "What is similar between geometry and arithmetic?" (Or something along those lines -- my recall is a bit fuzzy.  It was the crack of dawn, if you'll remember.)  If you're wondering what the answer is after looking over everything in the grid, it's that the 'equal' signs are also parallel lines. 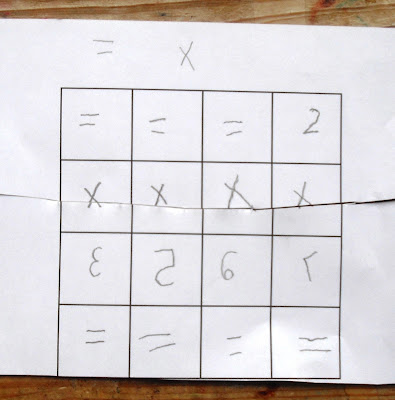 In this game she asked her dad to 'make triangles out of a square.'  Hmmm....sounds familiar!  That big dot at the top of the grid is the starting point, she says. 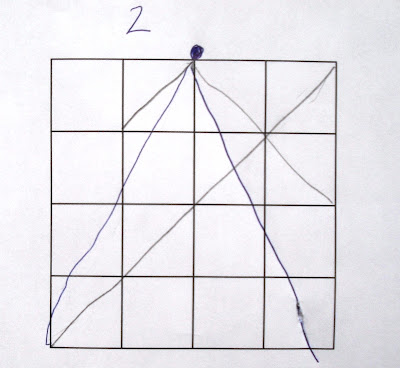 And, finally, this game is a 'number search.'  You're supposed to find the hidden sequence of numerals that can be connected with one line (but not necessarily a straight one).  Hint: It's a sequence of six numerals. 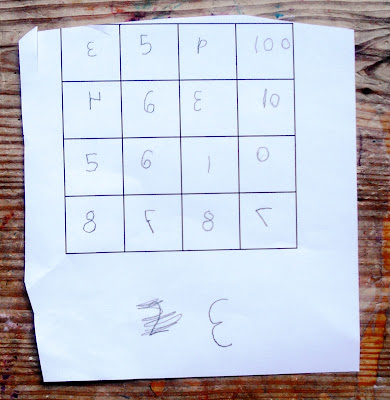 And that's what happens if you give a girl a grid -- not what you expected, but definitely entertaining!
Posted by Malke at 6:49 PM 1 comment:


It's sort of a convoluted story* about how I came upon this cartoon but when I first read it I burst out laughing and thought how perfect it was for what I'm doing these days. (Meaning, trying to teach math to my child who creates a back story or narrative for pretty much any any endeavor.)  So, I thought I'd share.  The image came from Lynda Barry's blog The Near Sighted Monkey.

*The long story, if you're interested, is that Lynda Barry went to my alma mater The Evergreen State College in Olympia, WA.  She is a contemporary of Matt Groening (The Simpsons creator and Evergreen grad) and is, by all accounts, an incredible writing teacher.  I have been working up the courage to contact her to see if she might be interested in writing  for ALT/space, the online project of the Teaching Artist Journal (which I edit).  While I was thinking about all this I found her blog and saw that she would be teaching at a summer writing institute in my town.  That was a weird coincidence.  I heard through the grapevine that she is as wonderful as everyone says.  Although I have not yet worked up enough courage to get in touch, I have really been enjoying her blog!
Posted by Malke at 2:36 PM 1 comment: