Sometimes, all you have to do is ask the question.

I was looking for more geometry to do with the kid, so I headed over to the Living Math Forum for some inspiration.  Needless to say, I got great suggestions which jump started my thinking process in a big way.  Not all of the suggestions worked for us at this particular moment; my daughter is not all that enamoured with computer games, for instance, even though there are a ton of great online math game resources.  I also got some recommendations for building sets, but historically she hasn't been drawn to that kind of thing.  Also, most of them are pretty pricey and I'm just not sure I'd want to risk the money at this point.

One of the best suggestions for my particular learner was the book String, Straight Edge, & Shadow: The Story of Geometry by Julia E. Diggins.  We found a copy at the library and are taking it a couple of pages at a time.  It's a wonderful story but a bit dense, in the best possible way.  There's a lot to ponder and it's worth taking a few days to process things between readings.  Every time we read it we immediately find connections in our daily life.

My favorite thing about the book so far is the writing which weaves in and out of descriptive suppositions about how early humans discovered the circle or the right angle interspersed with conversational observations about how a child might also observe those same ideas in his or her daily activity and environment.  After reading about right angles today in a chapter about early earth measurers, a simple folded piece of paper has now become our 'right angle checker.'  We use it to observe how this helpful angle maintains order within our physical world allowing us to move easily through life without worry of wonky walls or telephone poles. I never knew a right angle was so interesting, useful or ubiquitous!

Anyhow, it seems geometry is everywhere, just waiting for us to find it.  Such is the nature of small math moments.

For instance, the kid has really taken to what I'm calling her 'geometer training'.  She's a whiz with the compass.  We had an initial, and very successful, exploration of circles one Sunday and, a few days later our second round found me exploring concentric, intersecting circles.  The kid tried making her own. 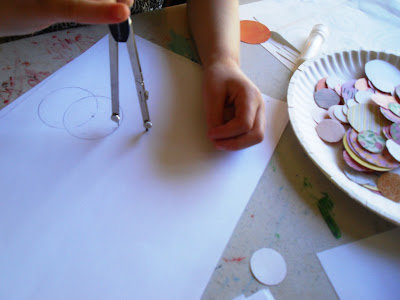 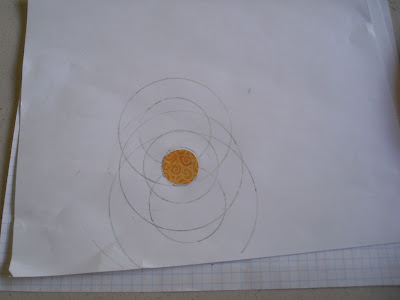 In our first round of exploring circles, the kid saw a triangle when she placed three circles in this position.  This time, as we sat working together, I took a minute to illustrate for her how I saw those triangles (below) -- by connecting the center points, and also by extending straight lines on the outside. 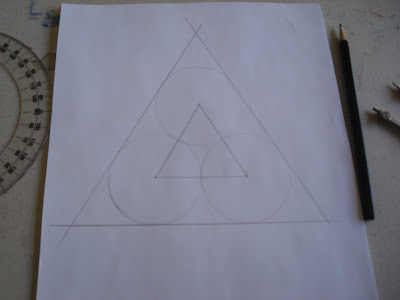 After pondering what else besides a compass might energize our study of geometry, I decided it was time to go out and purchase the game Blokus.  The kid was thrilled when she found that over half of the pieces are actually mini, multi-colored pentominoes.  (I also found a great pentomino puzzle generator for up to six pieces here.)  The rules are not hard (all pieces of a certain color need to be touching corners to play) but the kid keeps noticing the open spaces and wanting to fill them in with the shapes instead of playing the 'touch corners' rule.

The picture below is when we finally decided to throw out the rules and see how many different sized squares and rectangles we could make out of the entire inventory of game pieces.  For some reason, this was a lot more fun for her.  I modeled counting the squares around the perimeter to determine whether it's a square or a rectangle and figuring area from multiplying length and width.  I think that an adult modeling his or her thinking and problem solving process in a real-life context is one of the most potent teaching tools at one's disposal. 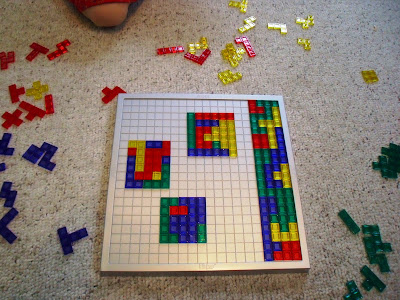 Speaking of modeling, the best way to get my kid interested in something is to be doing something interesting myself (like coloring in triangular grids) and having some 'extra' on hand for her to do as well.  Sneaky Math Mama!

(My grid designs are on the left, hers on the right.  I had my mind focused on rotation symmetry, but just let the kid explore as she would.  Her second design, on the right side of her page shows some reflection in her design -- a bit hard to see in this picture.) 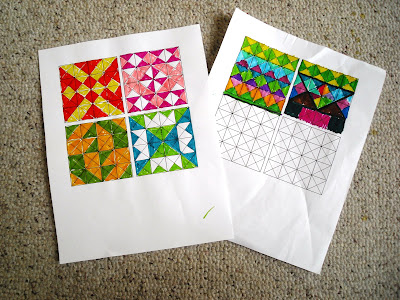 I always love finding something lovely after quiet time... 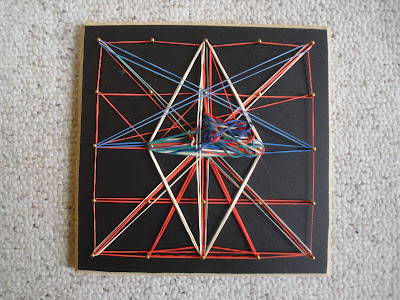 Sunday morning walks have become our routine and look at this beauty we found last weekend!  This morning she suffered through half of a fun (to me!) book on polygons.  The first half was about triangles, so next time we go out we'll be able to use our new words -- scalene, isosceles, equilateral, right angle, obtuse angle and acute angle. 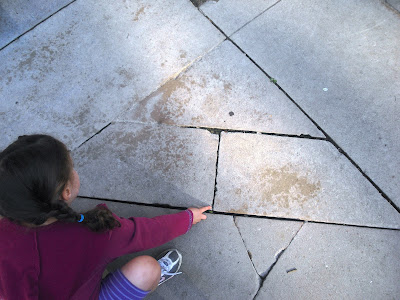 Or, how about this?  I love the stair step rectangular blocks.  The girl noticed the circle first, but there is also a little square in the middle of it, and look!  Small triangular blocks creating a square around the circle.  Awesome! 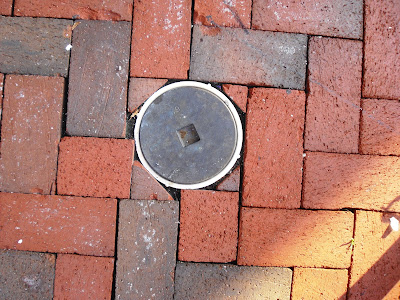 And neither of us could resist the big red circular table with cool circular cutout decorations in the middle.  It may be hard to see but the inner circle is made of little squares rotated 45 degrees and the outside ring I can't quite describe but is so lovely. 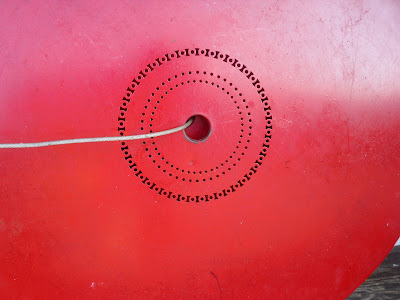 I'm in the middle of prepping for a Math in Your Feet Family Night for next week.  The kid really wants to go, but it's far away and she has a ridiculously early bedtime.  But, I said, I could bring up a few activities from the basement.  What would she like to do?

Turns out, the rotational paper pizza designs were quite engrossing. 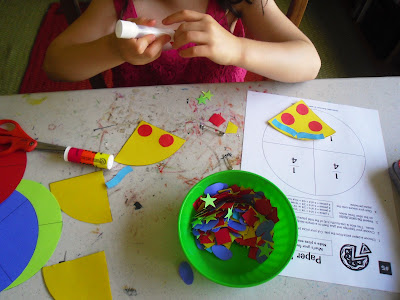 We talked about how each pizza slice had to have the same toppings in the same positions on each piece, a point to which she paid special attention.  And, after that, it was time to put them into position so could see the overall rotation design (which might also have some reflection in it too!) 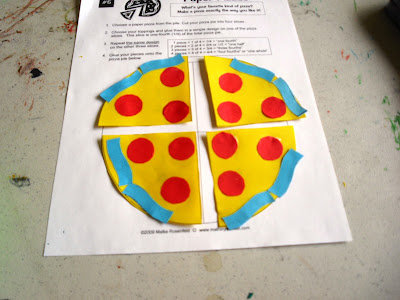 And, it's been months and months since I was obsessed with making the Platonic solids out of straws and pipe cleaners, a process she basically only observed.  But, when she found out they were part of the family night she suddenly got interested in making one all by herself! 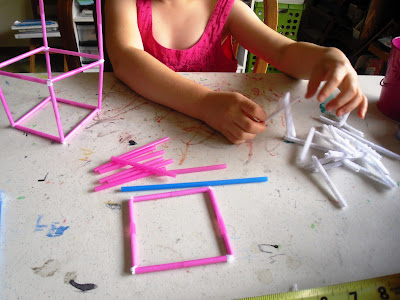 A really tall tower of cubes, that is.  My previous experience showed me that six inch straws do not hold up well under scrutiny from children, but three inch straws actually create a comparatively stable structure. 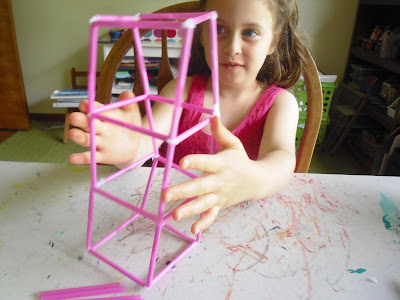 Maybe I should go for a building set after all.  Seems like she might be ready for it! 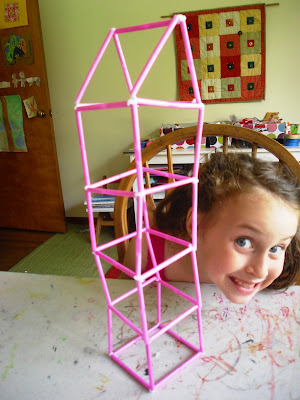