It's been a super exciting few days in mathematical weaving land here at our house.  This weekend I figured out some ways to facilitate basic paper weaving and grid exploration for the youngers, riffing off Patrick Honner's Moebius Noodles guest post.   Last night I did a little more searching for how others have managed the logistics of paper weaving and found this fabulous example of warp management which, in turn, inspired some incredibly productive inquiry on my part. Ultimately, all this will turn into something I can do with my seven year old but, for now, let me show you what I did!

Here's how I started the morning, with multiple colors of paper sliced down to 1/2" strips.  Previously, I had tried my hand at weaving with 1" and 3/4" strips, but both were a bit too chunky for my tastes (although they're perfect for the young ones).  My first attempt at the new approach started with gluing the top of each strip down onto a piece of paper, with a space between each consecutive strip of paper. 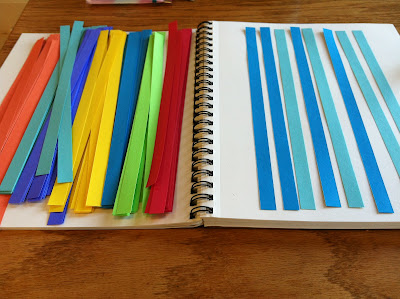 Below is some experimentation with keeping the weft (horizontal) snug, in yellow, and a little looser, in green.  I love the look, but for a child's mathematical inquiry, I think it's better to keep both the warp and the weft snug, so the final design is as mathematically accurate as possible.

Since I now had some flexibility with the number of vertical strips I started wondering if the number would affect the ultimate design.  Curious about working with threes I started with a warp of nine strips. At this point I was just playing around to find a design I liked.  There's a basic reflection from top to bottom and left to right in each design. 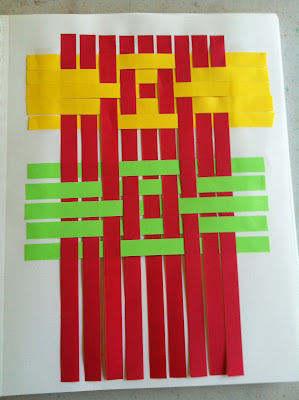 Here is another multiple of three, a six-strip warp -- a frieze pattern, I think!  The design is made possible because of the two-color warp.

It's also where I started of thinking about inverse operations.  Weaving technique requires the use of some combination of overs and unders.  Row 1, from right to left: [3-over, 1-under, 1-over, 1-under].  Row 2 & 3: both the inverse of Row 1, but with different colors.  Row 4: repeating Row 1, but in a different color.  Then repeat!  Even now it seems like magic.  I can't believe I figured this one out. 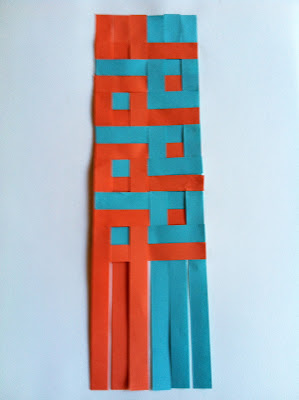 Why do inverse operations matter?  From what I've read, and the number work I've done with my daughter, I know you can't really fully understand addition until you also understand subtraction.  Same for multiplication and division.  Add/subtract and multiply/divide are each two sides of same process.  It seems simple to our adult brains but it can be a very hard concept for a child to grasp fully.  I'm thinking that a focus on creating a weaving algorithm and it's inverse might really be a supportive numeracy effort.

Here's another multiple of 3 warp: 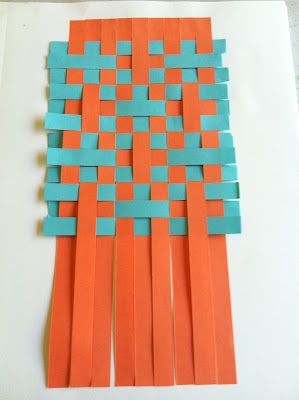 Also, notice that the second unit is the inverse of the first.  Instead of having the first yellow strip go 1 under, 3 over, the second unit starts 3 over, 1 under.  Interestingly, I usually weave from right to left, but when faced with an inverse, I found myself weaving from left to right.  I did it every time.  It was quite fascinating to watch myself in this process, which is why I suspect this would be really great for kids.  There's so much to learn and understand as you work to create a visually pleasing design. 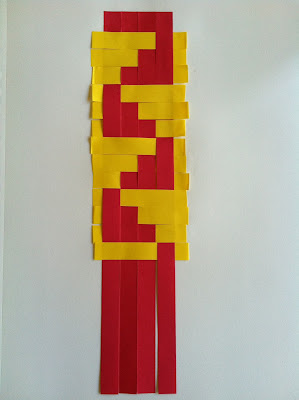 Here is a multiple of four, an 8-strip warp.  In this case, it's a basic over/under weave, but the two colored warp gives it some real variety.  I love this one. 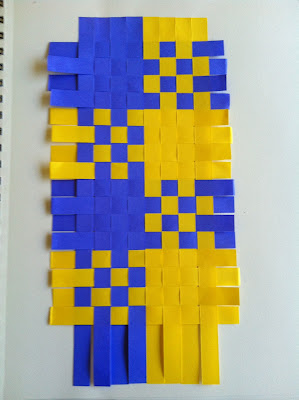 Another four multiple, this time putting together the previous two ideas: the weaving algorithm of the first and the two colored warp of the second.  I wasn't trimming the edges on my designs at this point, which I think affects how your eye sees the patterns. 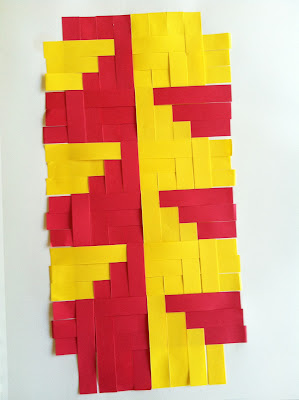 Now I was curious to see what it would look like all one color.  I think using green in both warp and weft brings out the structure in the weaving in a whole new way.  I like the green one untrimmed. 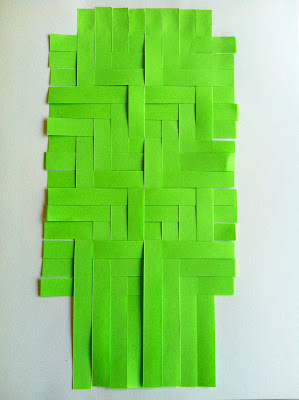 And finally, onto multiples of five.  This one is nice... 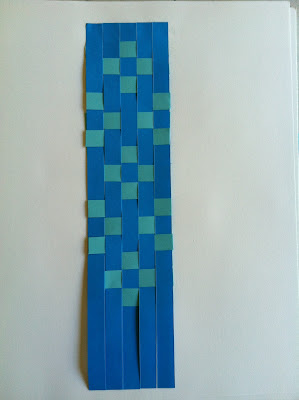 But this one is by far my favorite! 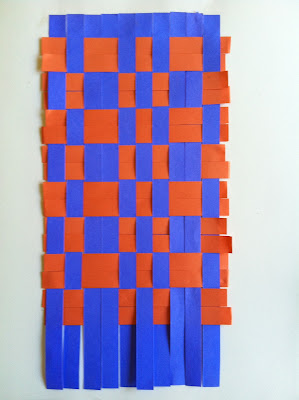 The first row is double strips that go [1 under, 2 over, 1 under, 1 over] and the second row is its inverse.  So simple yet very effective.  A ten strip warp is interesting because it's comprised of two, five-strip units.  A nice juxtaposition of odd and even.

It was such a fun day!  I think I understand the symmetries and the inverse weaving at this point.  I'm not sure how or if building a warp out of multiples affects things.  If you have any insights or see anything in my post that is mathematically shaky please feel free to correct me.  And, if I can clarify anything, please do let me know if you have questions.

p.s. I've got a new Facebook page where I'll be sharing links to cool math activities I find and some other things I'm doing with math, making, dance and rhythm.  Hope to see you there!