I often write about the times when mathematical inspiration hits but, most of the time, our daily lives are made up of smaller, less dramatic math moments. It's during these lovely transient events where I really get a good glimpse at how my daughter is thinking, mathematically speaking, and how she is applying her understanding in a number of different contexts.

My approach to math exploration at home has been hands-off, necessitated by a child who likes to captain her own ship.  This basically all boils down to the fact that math generally happens in bite-sized pieces around here.  It doesn't mean I am not influencing the process but it does mean I hardly ever make formal plans; instead, I am always looking for new games, thinking about what she might need or want to learn next and also how to introduce new things in a way that has the appearance of being at least 50% her idea.  I also leave stuff lying around to be 'discovered' or engage in my own pursuits, which inevitably leads to some curious inquiries from the wee bystander.

In addition to all this stealth planning, these days I'm also preparing for some summer arts programming up in the city.  In this case, I'll have three groups of students (ages 6-7, 8-9, 10-12) an hour each day for a week or two at a time.  It'll probably be harder to orchestrate the kinds of gorgeous, in-the-moment discoveries we have at home in a windowless basement room of a run-down church building with lots of kids and no air conditioning, but I'm going to try.

Here are some examples of the small moments of math that have been happening around here lately, including some of my thinking and experimenting about the summer.  I'll start it off with half a lunch which actually started as a whole lunch, but when the kid saw the design with a whole tomato in the center she insisted in cutting it in half before eating: 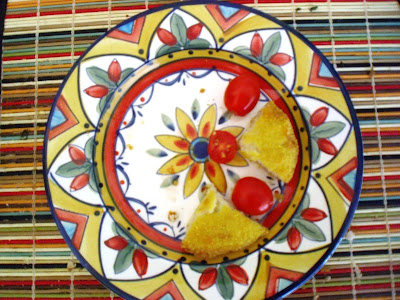 A spontaneous, self-initiated design from the kid after breakfast, utilizing her rock and mineral collection.  I guess she understands reflection symmetry after all! 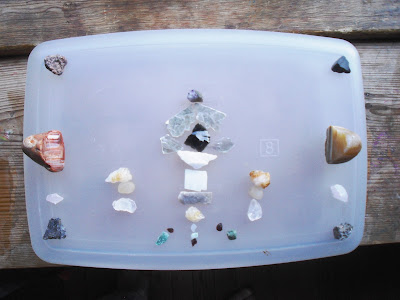 The kid was designing/drawing mazes while we were at the library but then got interested in a 2001 NCTM magazine on mathematics and culture I was reading, specifically an article was about a game played by the Fulbe children in Cameroon.  The game is essentially about creating designs by drawing line segments through a series of dots lined up in a grid.
After a quick look my kid drew her own version  ("The same design equals two different things!") and then also started drawing the library ceiling (square tiles and long rectangles of lights).  "There are patterns everywhere, Mama...Oh, look a book about cats!"  And so it goes... 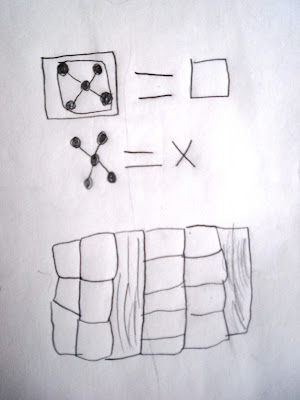 It's clear the kid likes functions, but the function machine she built is totally off limits to well-meaning but meddlesome adults.  The photo below is a bit blurry, but you'll see she really just likes the process of figuring out the equations using the same rule and different inputs.  The minute I said something about looking for a pattern in the answers the whole thing went south.  I've learned the hard way that, in this particular instance, there is no room for me to ask any questions about anything whatsoever.  However, I'm confident that she'll figure it out at some point like she did when made peace with the times tables last week.
She'd been multiplying on her fingers but finally realized how much time and effort that takes. "The multiplication table is like sight words," she told me, "you just have to memorize them."   Reading a book called Piaget for Teachers from the 1970's makes me realize that my approach is probably on target given her developmental age (newly operational) -- telling her that particular 'fact' myself will not help her thinking process.  The way to help her thinking process is, basically, to just let her figure it out through a variety of experiences (cleverly orchestrated in secrecy by her scheming mother, ha!). 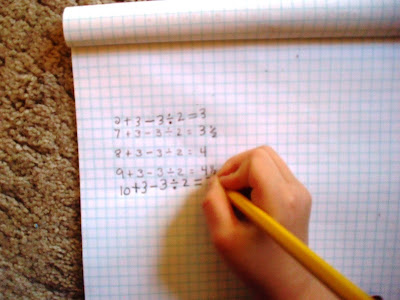 I made the kid a puzzle/game last week called "Make Them the Same" using elements of line, shape, design and color.  I didn't take a picture of the starting designs but if I had you would have seen that both designs in each pair were incomplete in different ways -- you had to compare the two to make them both a complete design.  I'm still playing around with this idea.  This version was too easy and my second try was too hard but I think I'll be able to make it work.  I really want to have it figured out by summer. 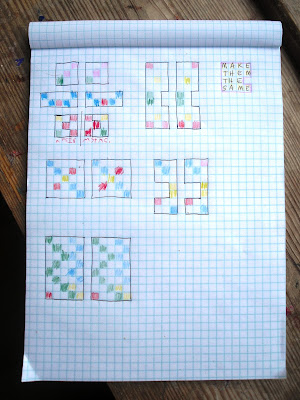 I spent a couple hours over the weekend looking through the math book lists at Love2Learn2Day and Living Math.  The theme for my summer program is tentatively called "What can you do with a square?" (or a pattern unit, I'm not sure which yet) and, in Three Pigs, One Wolf, Seven Shapes the answer is obviously 'tell a story with it'!  I made a sheet the kids could use while listening to the story, but when my kid discovered it she tried to put the tans on the outlines which are not to scale.  For the youngers I may have to give them each one or two real-size tan puzzle sheets instead (which I found at Mathwire), and use this sheet for the olders. 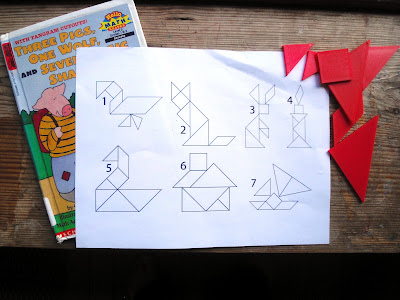 Chessboards are made up of lots of squares.  When I read this book to my daughter a few days ago to make sure it was something I wanted to use in the summer, I had the thought that I could make paper chess boards and give each kid a baggie of rice to follow along with the story.

It might get messy with all that rice, but part of my thinking is that Math in Your Feet is about order and structure and pattern.  A chess board is so very orderly and there's a growing pattern in the story (doubling, my current favorite topic).  And, having the real rice at hand will hopefully make the story, well, more real.  Also, I'm thinking about doing more with paper quilts and tilings and the image of the chessboard would be great to refer back to when bringing up tessellations with the older kids.

Not surprisingly, more small math moments have happened during the in between times of writing and editing this post.  It seems that little jewels of math are all around us just waiting to be discovered at unexpected moments!

As a postscript of sorts, I want to say that Maria Droujkova at Natural Math has been a huge inspiration to me over the last year and one of the main reasons I have learned to see math all around me.  I would not have grown my 'math eyes' if not for her Natural Math forum or reading about the math clubs and Math Treks she has orchestrated as well as the new Moebius Noodles project for young children.
Posted by Malke at 4:54 PM