So....we've been doing Sidewalk Math on and off since, hmmm, February?  Three months or so.  It's been me, mostly, getting all excited about what we're finding when we walk around town, taking pictures, oooh-ing and ahhh-ing.  I have been having me some serious fun, let me tell you.

The kid (now a freshly minted seven) on the other hand...  She's been there with me, she's been interested, participatory, but now?  Now, when we go out, I am not allowed to pull out my camera.  Ever.  I am not allowed to initiate any math conversation whatsoever.  Sounds horrid, except for the fact that now it's the kid who is finding math everywhere.

She ooohs over every single triangle she sees -- a scrap of fabric, a crack in the sidewalk, something on a wall.  In negative space, she sees a triangle of ceiling made by a partially closed door. She even made me this triangle love note.  Even the message inside is written to take the form of a triangle. 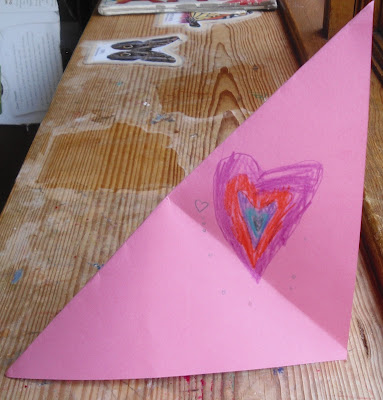 "Look Mama!  When I folded the square [paper] I got two triangles.  Look!  Look inside!" 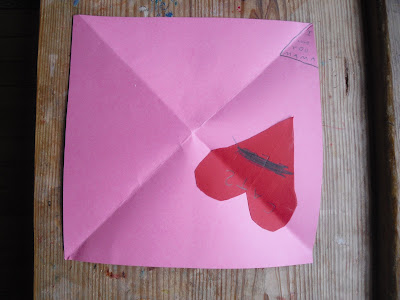 She ahhhhs over concentric circles.  She finds them everywhere -- even inside her cucumbers (where she also sees little stars, which, I manage to add over the adulation, are constructed with nature's numbers, Fibonacci, right?  Three, five, eight...the cucumber star is three....)  Seriously, this child has her eyes wide open.  We're in a rest room.  The baby changing fold out thing on the wall has circles, with circles inside them!  Concentric circles on the sidewalk.  At the bottom of the public pool.  Everywhere. 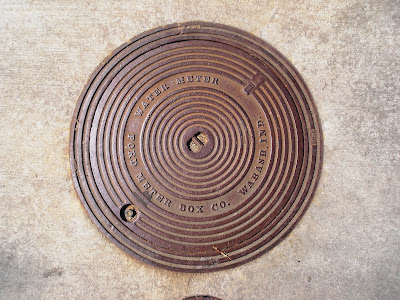 And let's not forget spirals.  I was making an extra effort a month ago to look for them and wasn't too successful, to tell the truth.  Also, the kid kept getting them mixed up with concentric circles.  It took a week or two of clarifying, on and off, to help her see the difference and... SNAP!  The light went on and now she sees them everywhere -- in fences, on light posts, on clothing, all around the house.  She draws them.  She finds small ones, big ones, mostly man made but also a vine here and there, or when we look really closely at how a plant is growing.  It's crazy.  Spirals are everywhere. 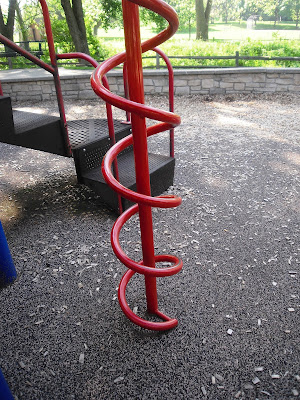 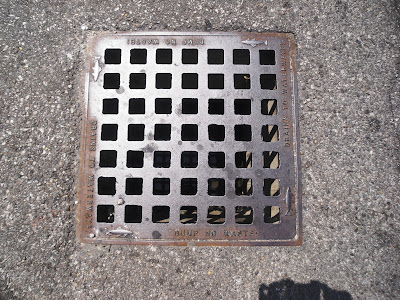 Today she said, "I'm going to make a book of all these shapes.  I'm going to take pictures with my camera and Papa will print them out for me."  She wanted me to have nothing to do with it.  Sniff.  But, still.  Isn't it cool that this whole thing has become completely, totally hers?!

In the back of my head I am always observing my own mind-noise that says, "What's the big deal?  They're just shapes.  Kids learn about shapes in preschool."  But my answer always circles (spirals?) back to the fact that the longer we keep our eyes open for it, the more familiar she has become with the possible variations and anomalies (size, rotation, tilings, etc.) that can occur in 'basic' shapes.

(An aside: It's been hard to verbally explain the difference between a rhombus and a square rotated from its traditional position, but sidewalk chalk saved the day!) 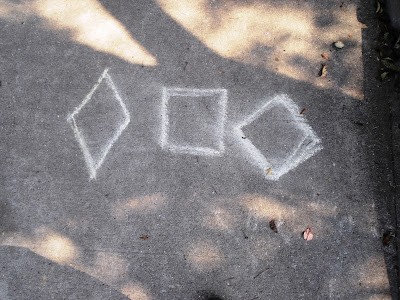 Despite the doubts, my sense is that all the conversations we've been having over the last few months will eventually make geometry on the page that much more meaningful, and maybe even easy.  (I can also imagine that this kind of activity also serves the larger goal of pattern recognition in any area of math she attempts.)  It will all make sense because she will have seen those shapes in their natural habitats, and by identifying them and talking about them she will have made each shape hers and hers alone.  And, as the structure of the universe continues to emerge in front of her very own (and open) eyes, how much more fun will her world be to play in, explore, put together, and then take apart again?  A living math book, our world.  Not 'just shapes', y'all.  No indeed.

Check back with us in three or four years, maybe seven, and we'll see if I had it right.  Something deep inside me, though, says that the more we actively do and see and investigate the structures and forms math takes (like the curvy wall constructed with straight bricks?  Or, the sidewalk lines that look vaguely algebraic?) the more we can actually know math when we meet it in a more formal setting.

What I do know for sure right now is that the kid already considers herself 'good at math' and has added mathematician to her future career choices along with actress, singer, dancer, geologist, archaeologist, astronomer, writer, illustrator and cartographer.


Have fun everyone!  If you haven't heard yet, math is everywhere!
Posted by Malke at 8:11 PM