Messin' Around with the Commutative Property

We were at our second classroom (aka local co-op cafe) and just starting our project when a guy comes over and enthusiastically asked, "Can you tell me what you're doing?"

"A multiplication tower?  What's that?"

"Well, we've got these posts on a grid, and we are going to use different colored beads in different amounts to..."

And then he says, I kid you not, "Oh, yes, multiplication is just repeated addition, really."  (Seriously, I'm not making this up!)

I was flummoxed, because after some great conversation about multiplication in the comments section of a post of mine from last March, and the aha! moment I had about scale while reading the Ten Times Better book, I know that's not all there is to multiplication.  Not at all.  I was so flummoxed it was all I could do to reply, "Well, it's also about understanding scale and measurement and rate..."

And just like that he cuts me off and says, "Well, this seems to be a good concrete way to learn addition..." (or something like that) and leaves, obviously much less enthused and impressed than when he came up to us.

And that about sums up the collective view of elementary mathematics, doesn't it?  Essentially, the message we get is: "There's nothing much to it, just learn your facts and when you get a little older you can do real math [pat on the head]."

No, I'm not bitter, just perplexed, because when we started building this tower the questions started flooding in.  I started wondering about a LOT of things, most of all the commutative property (which I inadvertently keep calling a process, and I think I might be on to something, see what you think.)  Here is what we did:

I measured out a grid and my daughter and I inserted bamboo skewers into the intersections to make a total of 25 posts.  Our first try at the tower grid was to start with one bead at the origin and then move outward on both the x- and the y-axes with two beads on the next posts, three beads on the next, etc.  Here's a picture (isn't it pretty!?): 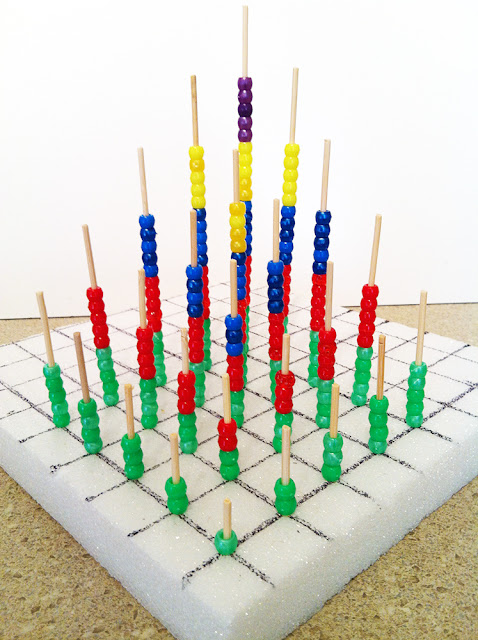 First, it's such a nice three-dimensional gradient, don't you think?  And the different colors show the multiples of each amount clearly.   But the questions started when we got through with 2 x 2 = 2 green + 2 red.  Moving up to (1, 2) I suddenly thought:

"What colors should we use?  Is that two 3s or three 2s???"  It helped to see that the square numbers 4, 9, 16 and 25 moved up the diagonal and it calmed me a little to know that, whatever happened, we weren't completely on the wrong track.

It also helped to turn the model and look at it from different perspectives.  This is a nice view because you get a linear progression of the colors.  On the far left the posts increase by five: 1 five, 2 fives, 3 fives... and on the far right the posts increase by one: 1 one, 2 ones, 3 ones... This, incidentally, is the view my 7 year old prefers, perhaps because it is so orderly. 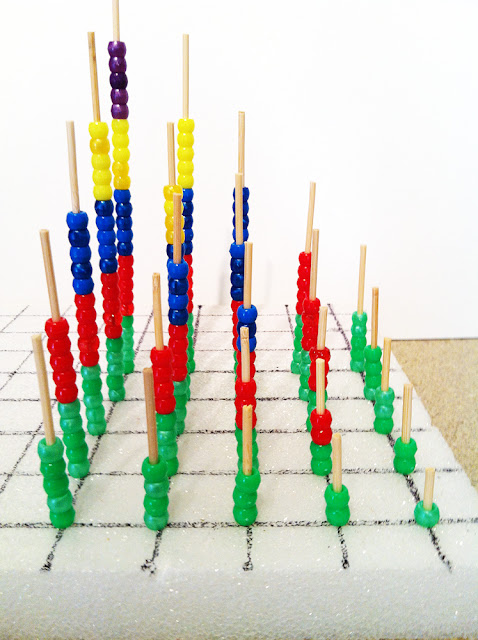 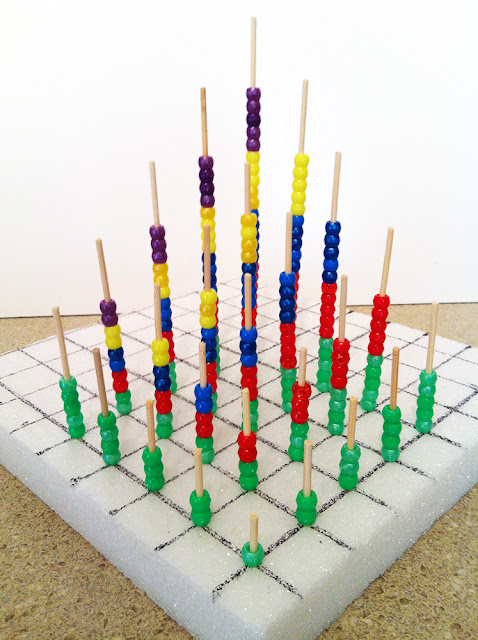 ...but nothing else changes!!!  Is that a surprise to you?  I am not ashamed to admit that it surprised me.  I initially thought I might have to change the posts lengths to accommodate my new approach to the beads.  Here's the thing:

I do absolutely understand in my head that 3x2 is the same as 2x3, but after re-beading the grid/tower it does not seem exactly the same.  I mean, look!  The progression of colors and total number of beads are the same, but the distribution of each color is completely different than it was the first time. 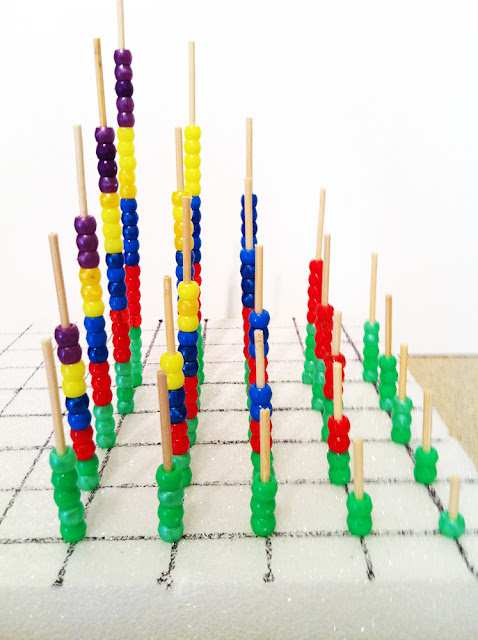 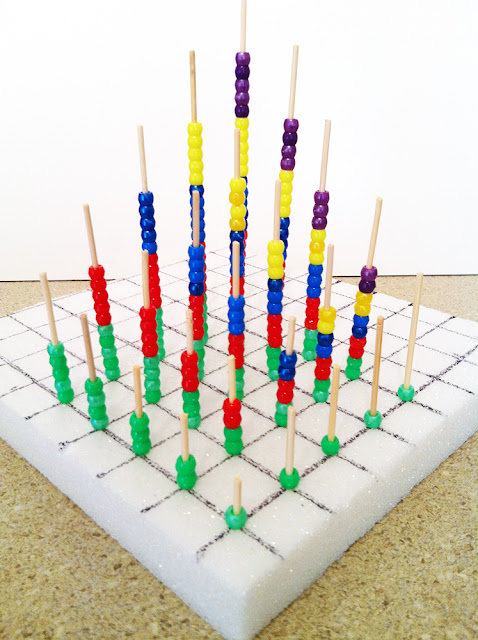 It's a similar result to attempt #2 but the progression to purple now occurs on the x axis!  My daughter likes this version a lot, but I'm not so sure.  The whole thing is less symmetrical than the others but, on the other hand, there are other things to observe and learn from it that you don't see in the first two. 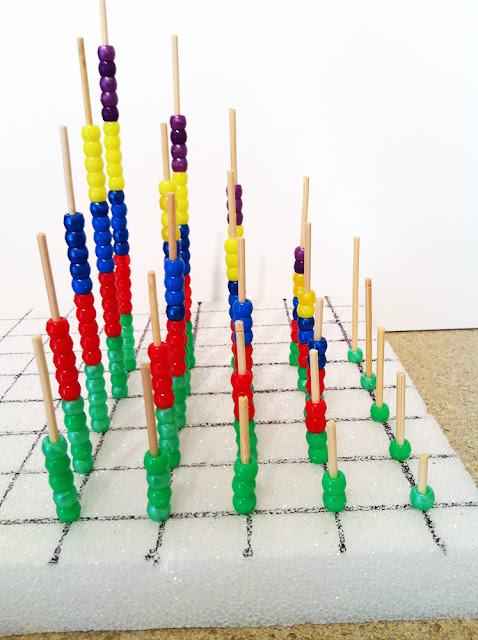 I'm sure there is more analysis I could do, including comparing the total number of beads and distribution of color used in each  attempt but that's for another day.  My point is, yes, multiplication and addition can be done in any order, but our response should not be 'so what, that's easy, don't forget, let's move on' but rather, "Wow, that is SO amazing!!!"

I mean, sure, you get the same final answer no matter what, but just look at the variation in quality.  For example, a combination of four 2s (2 green, 2 red, 2 blue, 2 yellow) looks completely different from two 4s (4 green, 4 red).

Before I started my personal math remediation, multiplication seemed like nothing more than a table of right answers.  Now, however, it seems like a wonderful opportunity to find as many different right answers to the same question as possible.  My kid got a little bored with the beading process but no matter.  I'm going to leave my favorite version out on display, which will make at least four different multiplication models up in our house right now, for us to ignore or puzzle over as we will.  It's already generated some nice conversation about square numbers.
_____________________________________

p.s. I got inspired to do this project while reading the proofs of the grids chapter in the new Moebius Noodles book.  They say the project's target age is birth to age 6 but, using today's activity as an example, I really think anyone can benefit from their playful, hands-on, inquiry based approach to math.

p.p.s. I kept the skewers long during the first beading iteration but quickly decided to trim them because I truly could not see the forest for the trees, lol!  I think the trim helps focus the eye on the gradient and the patterns produced by the color quantity and progression..
Posted by Malke at 1:06 PM