I just found the most excellent book!  I was at the library looking for two math related books, one of which was in the multiplication section, when I ran across Ten Times Better.  On first glance it looks like it's just an introduction to your tens times tables, albeit a very engaging one in poem format.  Essentially the animals try to best each other -- one animal has an amazing attribute but there's always another who is 'ten times better' (more, bigger, faster) than the one who started the bragging. 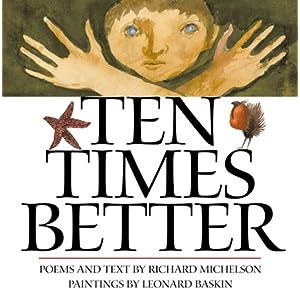 Fun, but as my seven year old daughter said "I know my tens times tables," and I think that would be most folks' assessment of the book.  But...

...if you read all the way to the end into the section just past the poems you will find a gold mine!

Multiplication to me has generally always been about memorization.  I've been trying really hard lately to push through my wall of resistance about numbers toward something that approximates actual understanding -- I want my daughter, as well as myself, to understand what multiplication really is.

What I've come to learn is that multiplication can be used in a number of different contexts and that there are some basic models that can help a child experience, visualize and conceptualize the meaning behind the operation. Through some reading and a great post from Let's Play Math on multiplication models I've learned that these models include:

Sets or groupings, which we've done a lot of.  Arrays are ubiquitous.  But the third concept, measurement, is the one I am least comfortable about.  I mean, when I was in third grade I memorized my times tables and that was that.  But I had no earthly idea what they were for or even how to use them outside the context of an equation.  Working through the back pages of Ten Times Better this morning I finally get it.  And, what's even better, my daughter got to pull out the 30' tape measure, run laps in the sun room and do some long jumps all in the name of mathematical inquiry.  Here's are the highlights:

The back of the book holds amazing information about the twenty or so animals from the poems in the preceding pages. The ant is TEN TIMES STRONGER than humans.  If an ant weighed fifty pounds (the weight of a human child) how many pounds could it lift?  My girl counted it up on her fingers and immediately sprang up and ran around the living room trying to lift up all the chairs.  I nixed that idea, but it was such an immediate reaction that it sparked the idea that this needed to be an interactive experience.

Nine-banded armadillos are one foot long.  They are descended from glyptodons who were TEN TIMES LONGER.  I must admit I initially tried to get her to just answer the question using her knowledge of the tens times tables.  I mean, they're easy, right?  But as this activity proceeded I realized very clearly how memorization of facts does not assure an understanding of either how to apply the operation in context and especially not when size and scale are involved.  My kid, at least was not getting it, even with an 'easy' problem of 1x10.  So, I said, how about using measuring tape?  She ran to retrieve the 30' measuring tape and we found the one foot mark.  Then we counted out a total of ten feet.  Wow!  The glyptodon was not huge, but definitely MUCH bigger than it's modern descendent the armadillo.

Some centipedes have 100 legs, but the garden variety has 30.  "With so many legs," the text reads "the centipede really is TEN TIMES FASTER than most insects it catches for food ... If a centipede were as long as a six foot adult is tall, it could run twelve feet in one second.  How far could it run in ten seconds?" Well.  On this rainy day we couldn't go outside, but we measured the sun room at 24' in length.  Five lengths would equal approximately 120'.  Could she run it in ten seconds? (It took her only twelve!)

Laughing, we went back to the living room. Did you know that elephants are TEN TIMES HUNGRIER than you and eat as much in one day as you eat in a month?  If you eat 40 pounds of food every month how much does an elephant eat daily?  I started skip counting by 40 (which is really the same as 4, right?) and she joined in.  400 pounds!?!  Wow.  That one impressed both of us.

Next, the frog. "Most people can jump as far as they are tall," says the text "but a frog can jump TEN TIMES FARTHER."  Before I knew it we had jumped up, taped down a line to jump from, measured the length of the girl and she was off!  It's true!  She could jump the length of her body, and sometimes a bit longer.  Can you imagine TEN times further?   From the back of the house to the front of the house.  Wow.

A baby giraffe is six feet tall when it is born.  The kid jumped up on the couch to measure how tall that was.  And it is TEN TIMES HEAVIER than a huge human baby.  "If that baby weighs eleven pounds at birth...how much might a small baby giraffe weigh?"  By this point, she really had the concept and jumped in to start counting by 11, fast, marking on her fingers...110 pounds!  She ran off to the bathroom scale.  At the age of seven she's about half the weight of a baby giraffe at birth.  Awesome!

The goldfish question is great -- if kept in a small and/or crowded bowl it only gets to be about 2" long.  If allowed more room, TEN TIMES LONGER!  We pull out the measure tape.  Here is 2" let's count that ten times... Again, the numbers are one thing, and 20" isn't that long, but seeing the tape/fish get longer, and longer, and longer is another.  A living number line!

Our last one was the giant squid that can be TEN TIMES LONGER than the tallest basketball players are tall.  "If a basketball player is seven feet tall, how long would a giant squid be?"  70 feet?!?  How long is THAT?!  Our measuring tape was only 30' long.  Our sun room is 24' long.  So that means almost three sun rooms long??  Wow.

Did I mention I really, really love this book?  Scale is such an elusive concept for me, and I'm sure for kids too.  Ten times bigger, longer, faster and smaller is a large enough amount to make an impact, psychologically speaking, on kids who know intuitively that they are small creatures in an adult-sized world. I read somewhere that intelligence isn't the biggest factor in being 'good' at math -- it's actually personal motivation (and, I would add, personal relevance) that motivates someone to engage in mathematical activity.  This book provides motivation in spades.  I think that kids from preschool to middle school could all get something out of physically measuring out 'ten times longer/bigger/faster' to figure out the answer instead of just calculating it.  Just because you've memorized something does not mean you 'know' it.  I am living proof!

p.s. I just found this book.  No one paid me for a review.  But, if asked I'll say it's TEN TIMES BETTER than any other math book I've read in a long, long time!
Posted by Unknown at 1:09 PM