A: When you're seven years old and you've just finished counting all the dimes in the change jar (91).  You've successfully made an array of ten dimes in nine rows.  There's one dime left over.  You count each row of ten: "Ten, twenty...ninety..." and then you look at the lonely little dime and say, "And ten more! 100."

After a hugely frustrating argument conversation about how dimes can be both coins and amounts, your mother ends the lesson (that was, honestly, a little too long but she pushed it a little since it had been going well up until that point) and goes off to wash dishes or sweep the floors or do laundry which is what she does when she needs a little space and time to think something over.

It's at that point when your mother thinks back to something she read about fractions and units in this article from the MAA.  And to a fabulous video lesson by Christopher Danielson and produced by TED-ED on units called One is one...or is it?  She also thinks back to a post by Julie on using Cuisenaire rods for a factoring activity, and, finally, to a book called 1+1=5 that she read about in this Moebius Noodles post.

She thinks and she thinks, for days, actually, and then comes up with a very simple worksheet she titles "Unit Equations!"  The exclamation point is intentional because, really, the world of numbers is an exciting mystery to be unlocked, whether you, the seven year old, know it or not. 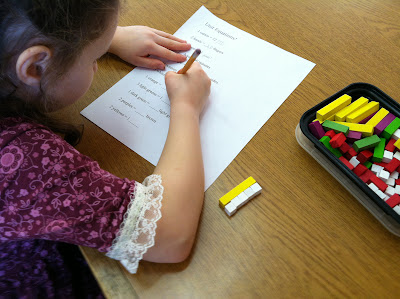 Then the questions get a little mysterious.  What does your mother mean by "5 whites = 1 _____"?  That's when your mother pulls out the Cuisenaire rods.  You've not really played with these for over a year, but you 'get it' right away.  Not only that, but you sail through the other five questions easily.

What you don't know is that your mother was judging for frustration tolerance level during that activity and has decided to see if you can go a little further.  She worked up a little activity on Saturday night which included finding the factors of each factor of 3 up to 15.  The basic instruction is that, no, we're not adding, we're finding multiples.  Each row of blocks must be exactly the same length (thanks Julie!) and each row must be a different color. 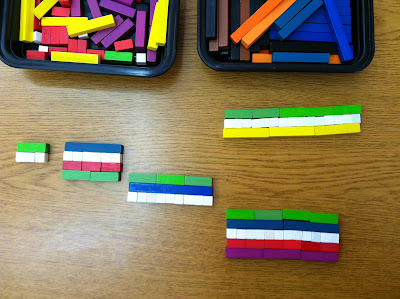 "What does that mean exactly?" you ask.

Your mother stands the dark green rod (6) on its end and says, "This rod is 6.  There is one rod to make six.  So, that's 6 one time.  The white rods are each 1, and there are six of them. So, that's 1 six times. The funny thing is," and here your mother pauses, "...can I give you a super big word?  It's called the commutative process.  That's just a fancy word that means that no matter what order you multiply or add numbers, the result is the same."

And, as your eyes do not convey complete understanding, your mother continues, "What that means is that even if there are two 3-rods or three 2-rods, they are both the same total length."

From there, the activity proceeds wonderfully, all the way up to five 3s, and when it is all over, your mother asks hopefully, "So, what did you notice while you were doing this activity?

And the seven year old replies succinctly, in her sweet voice that resembles nothing of the frustrated girl from last week, "That one thing can also be something else with many parts."