All in Good Time 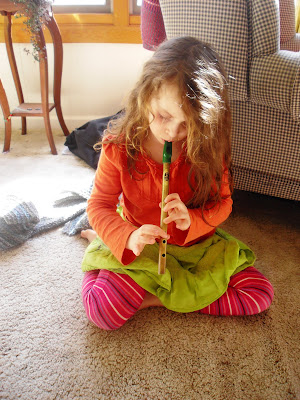 The kid and her dad are in the other room.  I can hear them -- he's teaching her how to play the penny whistle.  She's had tin whistles in her music box for years, playing around with them as she will, but today, apparently, she asked him to give her a lesson.  It's also the first time that she's ever asked anyone to 'show' her how to do something.  She's six years 'and over a half' as she tells it -- is this what Piaget meant by 'concrete operations'?

Her dad started with one note, which requires one finger.  The second note, two fingers.  Three fingers down.  One to two to three.  "I can go backwards," she tells him.  They've been working on covering the holes completely and breath control for forty minutes.

"You're a good teacher!" she told him.

There are a couple things going on here that fascinate me.

I love when kids think about doing something in reverse.  It happened last Friday on the last day of Math in Your Feet up at a Greenwood school.  It happened this weekend in my house.  Any time you recognize or create a pattern, whether it be visual, kinesthetic, musical or number-based, you are thinking mathematically.  Any time you are changing a pattern, especially on your own volition, you are thinking mathematically.

I'm also fascinated by her sudden switch from playing around with the whistle to specifically asking for 'a lesson' and being able to focus on that lesson for over an hour.  It's a great example, to me anyhow, that kids learn when their brains are ready.  And, from what I've observed as both a parent and a teacher, every brain seems to be on its own timetable.  It's easy for me as the mom to be anxious about certain skills not showing up (reading especially) when I think they should, but really?

Really, I think I need to be more patient.  And, in the future, when I've got some silly idea that she 'should be able to x, y or z by now' I should just pause and recall all the other times it's cycled like this for her -- seemingly 'fallow' periods followed by an explosion of new skills and interests, like what happened this weekend...

The kid in question played her whistle non-stop for the last 24 hours and is now one note shy of a full scale, can play those notes forward and backward, and has learned the classic 'Hot Cross Buns'.   Oh, and she added up multi-digit UNO score this morning with the six cards she won from me by adding them into 15 and 14 then adding the result up in her head and was able to tell me how she solved it.  She's memorized half of the song "Fifty Nifty United States" and decided to write down as many state names as she could remember.  Plus, in the last 45 minutes before bedtime last night she wrote her own cat-themed creation story on the typewriter and just brought me ten multiplication equations written down in pencil, although the numbers are still being written backwards and in reverse order.  "How'd you do that?" I asked.  "I counted them up on my fingers, all by myself!  Isn't that cool?"

It's a veritable brain 'storm' around here.  I'm not sure why I worry.
Posted by Malke at 2:22 PM