A Game of Her Own: Discovering Division

This was one of those moments where you ignore the phone, turn off the stove, and just pay attention. 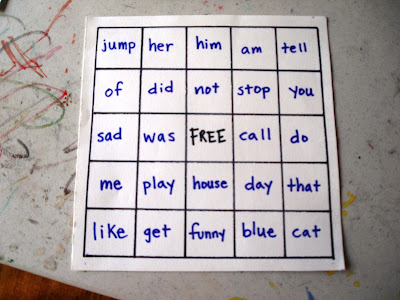 I was making a grid for a sight word bingo game, like the one above except still blank. My kid looked the blank chart over and said,
"I'm going to make a game board like that, and I'm going make it a math game."

"You divide an even number in half and then add it to another number."

It didn't actually turn out the way she had described, but she did make her own math game!  How cool is that!?  I should say that we both knew going into this that we were 'in development' with the game, that we really wouldn't know how to play it until we were done.

The game is a bit convoluted but patterns did emerge.  She dictated the directions to me which I've put below.  I'll fill in the details later in the post.

Supplies:
really flat, stiff paper
permanent marker
ruler
pencil
pennies
drawing stuff of all kinds like crayons or something
that's about it

Step One: Make the Grid
Have the mama make the grid, 25 squares, five rows, five columns.

Step Two: How to Play the Game
Write all even numbers in the grid starting with two. 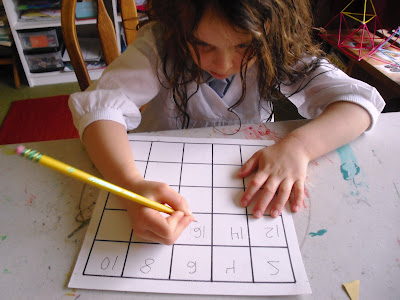 [After filling it about half way she exclaimed, "Hey, this is interesting!" and pointed out that each column included the same numeral in the one's place.]
Step Three:
Pick any number on the grid.  Use the pennies to divide that number in half.  Here's an example: One half of 28 is 14.  Color them both the same color on the grid because we know they're related.

The Kid's Final Words:
By playing this game we'll learn how to multiplicate (sic!) and we'll also learn our two times tables.

The Mama Adds:
By playing this game you'll also get a sense of 'even-ness' and 'double-ness' and 'half-ness' not to mention support your emergent abilities in division. 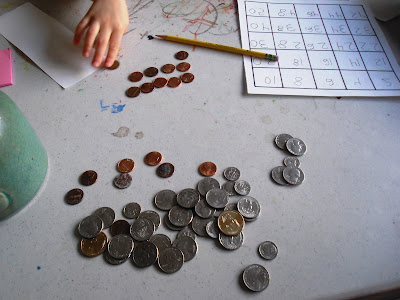 So, as you might imagine, this was a verrry interesting process to watch.  I should say that it was probably inspired by a game of tic tac 10 and tic tac 15 we played on Sunday.  She used the even numbers for those games and it probably reminded her that an even number can be divided into two equal parts.  That's the interesting thing -- she knew that in concept but not really in practice, until she made up this game.
The first number she chose was 18.  What's half of 18?  She couldn't do it mentally, so I suggested some Cuisenaire rods which she immediately deemed 'too confusing'.  I pulled out the change jar and she got to counting out the pennies, which turned out to be a perfect manipulative.

Counting out eighteen pennies seemed a little confusing at first, for some reason.  I casually mentioned that it helps me to put things in groups and then skip count, and that it's easy to count by fives.  One slim pause and she took the bait.
What really fascinated me was watching her trying to figure out how to divide the pennies into two equal groups.  First she spread out the pile of eighteen pennies into something that approximated two separate groups.  From there she echoed the strategy I had suggested, above, and put the pennies into rows, some four pennies long, some five.  I can't remember how the rest of it played out, but at some point the rows were all the same amount and there were two extra pennies without a clear home.  For some reason she didn't (couldn't?) just split them up, one to each group. 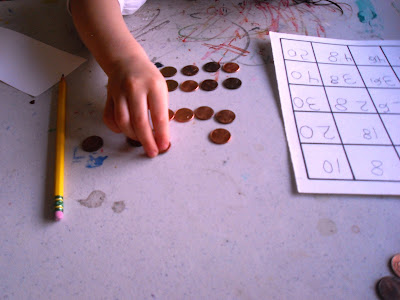 I think what she was looking for was some 'even-ness' in the rows as well as the total amount in each group.  She moved the pennies around until, voila!  She had figured it out visually but we also counted just to make sure that we had even amounts in each pile. 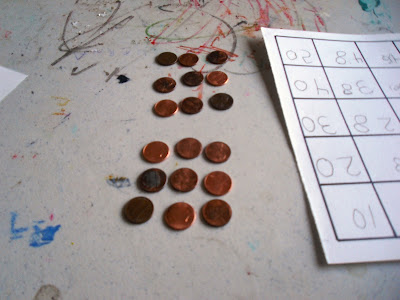 I suggested writing the answer in the corner of the 18 box, just so she'd remember, and she continued to make notes in this manner for the rest of the game.  We looked but couldn't find '9' anywhere else on the chart.  Why?  Because there are no odd numbers on the even number chart, silly!  Time to pick another number!

This time she chose 28.  Since we still had eighteen pennies out, I asked how many more pennies she needed to make 28.  With the answer she added the extra pennies into the mix and proceeded to divide them into two groups more easily than before.  I'd show you a picture of the process but she told me to stop taking pictures!  It was almost dinner time and she was focusing so hard, she said the camera distracted her. 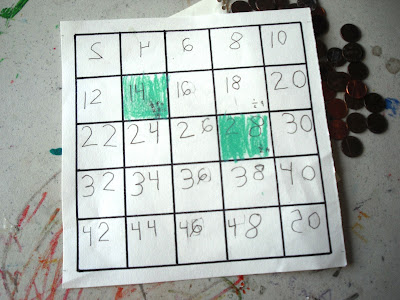 And then we were both worn out, it was time to make dinner and so we left it there for the day.  I wasn't sure if she'd want to keep going the next day, but she did.  On day two of making/playing this game there was a really interesting progression in her ability to figure out 'half' of most numbers on the chart. 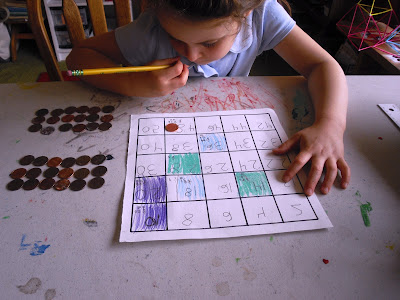 The first number she chose on day two, 36, required the use of pennies to figure out and, again, she wanted the pennies to line up evenly in their rows.  While placing all 36 pennies in rows of five she said, "I think there's going to be an extra one..."  She played around with lining them up so that all the rows were the same length and, luckily, these are even numbers, right?  So it did eventually work out that way, as you can see in the picture above. 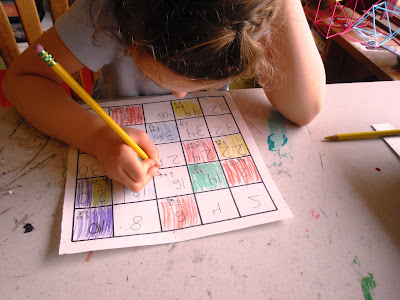 For the next number I suggested 20 and encouraged her to figure out the half in her head.  Easy!  It was at this point that things really took off.  She was able to figure out half of 48, 24, 12 and 6 all in her head by her own strategy of dividing the tens and then the ones 'in half', and then adding the resulting ten(s) and ones together.  Pretty cool! 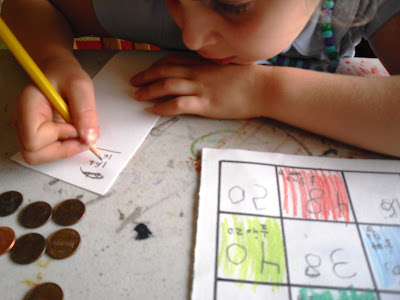 Then there was the 32, 16, 8, 4, 2 progression.  She had just figured out half of 16 and I wondered what would happen if she went the other way and doubled 16.  She went immediately to pencil and paper (seen above) for this which is interesting since she usually sticks to mental math and/or her fingers.  She didn't complete the sums with 'regrouping' (something she's not learned yet) and instead used the written numerals to help her thinking, something that sounded like "Okay, there are two tens and...[thinking]...thirty two!"
All told, she used four strategies in this game to help her figure out half and/or double of the even numbers: manipulating pennies, dividing in her head by addressing tens and then ones, adding (sort of) on paper, and accessing basic addition and multiplication math facts she's internalized already.
The colors for the squares in the chart are for numbers that are 'related' as she termed it.  2, 4, 8, 16 and 32 are all pink because they are a sequence of doubling.  6, 12, 24 and 48 are all red for the same reason.  We did a final check of the squares that had not yet been colored in.  Turns out halving each created an odd number which, obviously, were not on the chart. 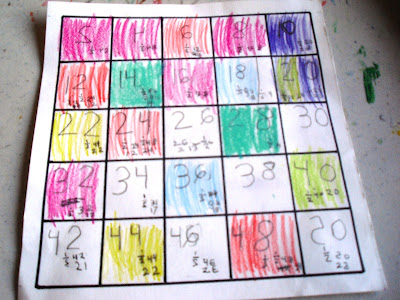 She was so excited and proud about making her own game.  As for me, I'm marvelling at how beautiful it is when a child literally constructs her very own understanding of math.  Neither of us really knew where the process of creating this game was going to take us, but it was obviously a worthwhile journey.  Thanks for sharing it with us!
Posted by Malke at 4:37 PM