At first glance, this article about the value of reading aloud to older kids would not seem to connect to math learning. But, to me it does.  Here's the piece that really stood out:


“The first reason to read aloud to older kids is to consider the fact that a child’s reading level doesn’t catch up to his listening level until about the eighth grade,” said Trelease [a Boston-based journalist, who turned his passion for reading aloud to his children into The Read-Aloud Handbook in 1979], referring to a 1984 study performed by Dr. Thomas G. Sticht showing that kids can understand books that are too hard to decode themselves if they are read aloud. “You have to hear it before you can speak it, and you have to speak it before you can read it. Reading at this level happens through the ear.”

I made a similar point while working with teachers and teaching artists in Minnesota last week when participants noticed how the math language was woven seamlessly into our dance work.

This vocabulary development, I said, was initially an attempt to help kids pay closer attention to what they were doing while they created their dance patterns. I noticed that they became much better creators when they had the right words to help them identify their movement choices.  When I started developing the Math in Your Feet program (after about six years of teaching clogging and developing the Jump Patterns tool) I put all those words into a poster that became an ongoing resource in our classroom: 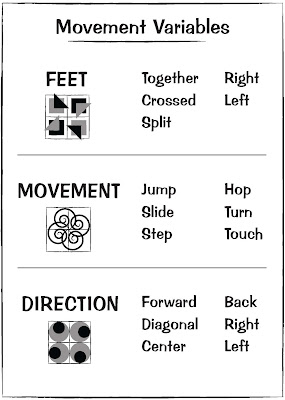 Here's how it all connects to the hearing/speaking/reading continuum.

In my classes at first we just dance, getting a sense of the new movement vocabulary and style of percussive dance in our bodies. I talk us through our dance learning by demonstrating with my own body and also saying the descriptive words out loud during our group warm ups and dance time.  Sometimes I point to the words I've posted while I'm talking. When students look confident with the dancing I ask them to verbally label the specific attributes of their dance patterns, using the Movement Variables chart as a resource. (Not incidentally, attributes are also a 'big idea' in mathematics.)


In addition to being able to parse our patterns, we use tons of other math terminology while we choreograph with our teammates and also in whole group discussions.  This approach allows students to fully grasp the real meaning and application of these ideas which, ultimately, allows them to write and talk confidently about their experiences making math and dance at the same time. Teachers consistently notice an increase of 'math talk' in their classrooms during the time I am in residence. As in, "I couldn't believe how much math vocabulary they were using!"

Math is a language but it's not just about terminology; there is also a need to become fluent in playing with mathematical ideas, noticing patterns and structure, sorting and comparing, and reasoning out and understanding relationships. Similar to the point made in the article, linked above, these math ideas are ideally facilitated by an adult through conversation, play and exploration before bringing it to the page.

How do children learn their native languages? By first hearing and playing with the sounds of words, experimenting with the rules of the language, testing what effect those words have on the world and the people in it, and fairly quickly coming to understand that words are useful in all sorts of situations. It's the same for math learning.  Similar to literacy (not just decoding) a child needs to 'hear' the math first (talk it, do it, play with it, manipulate it, make it, see it) before they can abstract or 'read' the math (notation, symbols).

Ultimately, what this means is that not only is it important to get a sense of the rhythm and the flow of the math/music/language first, but it is also really helpful to learn things in context.  Words mean something, language is a two-way street, and nothing means anything unless it has a use. You may be able to memorize a definition (or a math fact) but if you never get a chance to see, hear, feel or use a math idea in any meaningful, useful or fun way, it's really just a spectacularly sad example of 'in one ear and out the other'.

Luckily, there are many wonderful resources for creating contexts in which you can help children (or yourself!) learn math 'by ear' through games, puzzles, interesting videos, conversations, living math books and math art.  Here are a few of my favorites:

Edit/Addendum: After I posted this piece I realized that I could have also very easily supported the idea of learning math by ear using examples from the last couple years of homeschooling a wonderful, bright but resistant learner in the ways of math.  I could have also made arguments and brought in examples from my experiences as a traditional musician and dancer (Irish flute and a variety percussive dance styles from Canada, the U.S. and the British Isles) where music and dance is learned and taught as an aural tradition, very literally 'by ear'.
Posted by Malke at 2:39 PM