I'm at my final program site up in the city for this summer.  Every day we work with Jump Patterns for a while, learn some clogging and then it's time to sit down for a while and explore other kinds of patterns.  Nature's patterns, to be exact!

A couple weeks ago, at a different site, the kids got so excited about finding a 'nature's number' (Fibonacci!) inside an apple that I had to go out and buy a bunch of lunchbox apples and cut them in half so everyone could have their own apple star the next day.  I've never seen kids so excited about numbers, or apples for that matter.

I did my apple 'magic trick' again yesterday, but for today I decided to focus on shape and design in nature.  First I taped out a pretty respectable hexagon on the floor in the middle of our dance space. 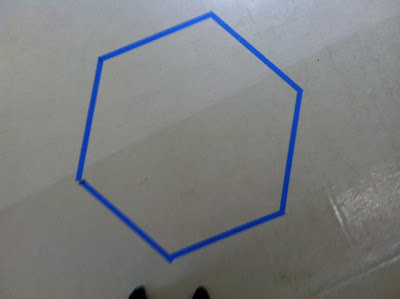 When it was time, I asked the kids if they knew what shape it was.  The older kids knew, but not the youngers.  (At this site I have five to twelve year olds in the same class.)

I asked how many sides a hexagon has, but before I'd allow an answer I started asking for volunteers to stand at each of the sides.  "One child, one side," I said, "Who wants to stand on the next side?  Okay, two children, two sides..." and counted up from there.

I picked the little kids on purpose since they had been the most challenged with the dancing.

"Okay," I said, "Everyone put your arm in."  I guess I wanted there to be some sense of division of the space.  Tomorrow I'll got back and put down more tape to show some of the internal structure of this hexagon. 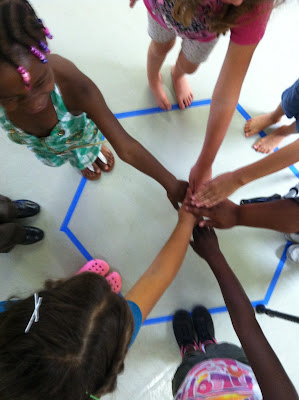 "How many corners does a hexagon have?  One child per corner...Oh look!  Six sides, six corners!"

Then each kid got their own pattern block hexagon, or two trapezoids, to add to the tiling I started. 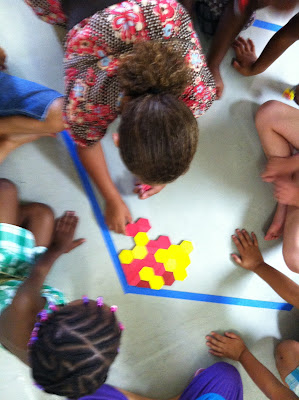 "What can you find in nature that looks like this?" I wondered aloud.  Only the last class (with more older kids in it) knew right off the bat. 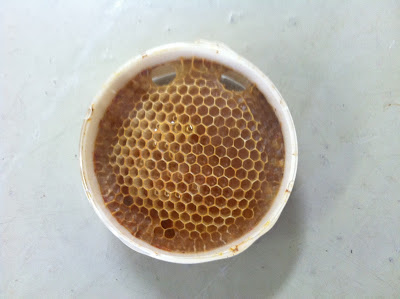 Then they got their very own taste of local honey.  It was a bit too strong a taste for most kids, but still a good new thing to try.

And then, much to my delight, something wonderful happened.  My first class was waiting to go on to their next workshop and were hanging around in the space.  They naturally found their way to the hexagon on the floor, made a circle around it and started playing song and chant games.  This is exactly the kind of thing that always happens when I put down tape where its never been before.  It changes the space and kids notice.

Another example from earlier in the morning: I was creating a set of parallel tape lines as I measured out the sides for the hexagon.  A little boy came over and jumped over the width and then the length.  I wish everyone would put tape down on the floor and then start the camera rolling to record all the awesome things that happen when kids discover this restructuring of their world.

This much I know: kids are to tape as bees are to honey.  Or maybe that's bears to honey?  Anyhow, here's the video of the girls playing 'Little Sally Walker' around the hexagon waiting for their next class: