After months and months of cruelly hot weather with muggy 80 degrees by 7am every day, one recent Saturday morning we woke up to 60 degrees, a clear blue sky, and even some mist.

The kid and I walked the two-plus miles downtown to the Farmers' Market via a paved trail that runs miles through our little city.  Lucky for us and our walkabout math habits, the lamp posts on the trail are numbered.  I was considering musing aloud what the half of each number would be when the kid spontaneously starts marching and, along with this steady rhythm, she starts to chant: "Eight plus eight is sixteen. Sixteen plus sixteen is thirty-twooooo.  Thirty two plus thirty two is six-ty-four!  Sixty-four and sixty four are...hold on...[pausing, eyes unfocused, obviously concentrating internally] ... one hundred twenty eight! [marching resumes] One hundred twenty eight plus one hundred twenty eight are..."

I don't remember how it went at that point.  We've not really done mental addition that high, but she made some mighty efforts nonetheless.  And, as we still had a ways to go, she started a couple more rounds of doubling, one starting at fourteen.  The other I can't recall.

We finally arrived at our destination and and found our friend L whose parents have a booth at the market.  Have you ever had lemon cucumbers?  Theirs are divine.  Directly after we found him, we also found a banjo!   Here's a quick video of the movement that ensued:

My kid has been wanting a waltz partner for like forever.  I'm not sure L. knew what hit him!  And, as for dance (and math) my kid seems comfortable in the phrasing and ratios of a number of time signatures, 3/4, 4/4 and cut time included. 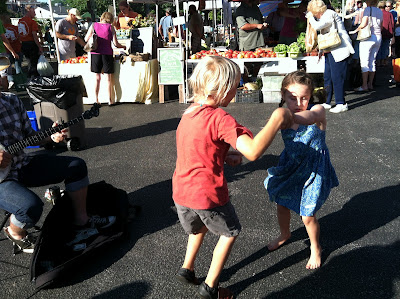 We then moved on to other regular market activities, like meeting the kitties from the shelter.  No math there, but I suppose someday we'll find it.

There's a lot of great spiral math in the fountain outside city hall.  No water in it this day, but kids regularly start in the center and splash spiraling outward, or float bark boats in the reverse direction.  The spiral actually opens way up on the left there, meandering in curves around until it meets the actual fountain. 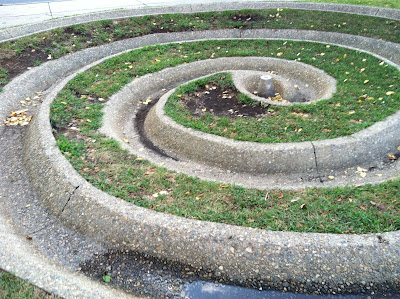 And, although the water in the spiral fountain had been turned off for some reason, it didn't stop the kids from playing.  Apparently my girl and L. had been searching for big and interesting pieces of birch bark on the ground when she ran over to me all excited about finding a map of the fountain drawn in pen on the bark "with an X on it!"   Of course, that had to mean treasure was close by. 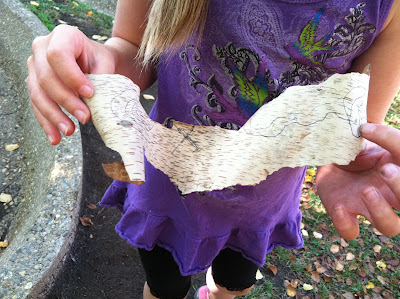 And, of course, they started trying to follow the map (surprisingly, almost to scale) of the fountain area.  They got completely engrossed in figuring out how to read the map to find the location represented on the map by that curious X.

At some point they recruited another girl, maybe older?  It's hard to tell because my kid is pretty short for her age.  Even L. who is a year and half younger is half a head taller than her.  Anyhow, they pondered, and searched, and retraced their steps over and over.  After about fifteen minutes I realized that they were looking for an actual X on the ground.  At that point I stepped in and wondered aloud whether someone who had hidden treasure would want to mark the spot on the ground or not.  I mean, really.  If you've got treasure you really don't want anyone to know about it, right?

The three kids finally decided they knew the exact place where the treasure was buried and I had to agree.  They had done a perfect job at reading the map but couldn't find anything.  The finally decided the treasure was under the cement trough somewhere and inaccessible.  A little downcast, but ever perseverent, they moved away from the spot to talk some more about the whole situation.

At that point I figured that, if they had spent over twenty minutes working together to analyze the map and the territory and actually succeed in pinpointing the exact spot (not to mention collaboratively analyzing the potential motives why someone would leave a map behind) they should be rewarded in some way.  Being short on change I petitioned bystanders who had been watching the proceedings with interest.  Between us I got three dimes and three pennies.  I made sure the treasure hunters weren't looking and poked the change into the dirt.  Then I said:

My bystander friends were looking on at a distance and we all just beamed at how excited the kids were to find their treasure.  They figured out how to divide the money equally.  I'm not sure, but they may have wondered why it wasn't more than 33 cents but that didn't stop them from telling their story over and over to anyone who would listen.

You know, the story about The Day -- the day they followed a found map to buried treasure on city hall grounds.  Perfect.
Posted by Malke at 9:16 AM