As the mother of a narrative-driven first grader, I have become a huge fan of the math storybooks out there.  I wish there had been more of them when I was a kid.  My daughter and I love books written by or supported by Marilyn Burns, like One Hungry Cat by Joanne Rocklin (it's about division).  I also like Loreen Leedy's books, on all sorts of math topics, and the Math Start series as well.  Our favorites are probably all the books in the Sir Circumference Series.

On the other hand, we've really enjoyed learning math by finding it wherever we are and in whatever we're doing.  Since about February we've been paying attention to our physical world and finding as many different examples of geometry in our lives as we can.  It's quite stunning how beautiful and full of math even a city sidewalk can be if you have your math glasses on.

Back in May I wanted to start looking for spirals but only found two examples.  One in a garden and one in our local playground.  Long story short, at some point my daughter picked up on the spiral thing and started pointing them out, only to have me say, "No, those are actually concentric circles," which then lead to a few days of clarification about what a spiral is and isn't.

Now she sees them everywhere!  We're a team, her and I.  It's really fun that things we have taken for granted all our lives suddenly have a new dimension. Which is why, I think, that a recent return to reading familiar picture books from our home library made me notice math in otherwise non-mathy books.  Here are some examples.  Maybe you have more?

In Ezra Jack Keats' The Snowy Day, cut paper illustrations show math from the very first pages.  In addition to great spatial vocabulary (up and down the hills, tracks in the snow, on top of, snowballs flying over the boy's head) patterns abound. Check out this wallpaper -- I love how the pattern units are so different from each other, and yet the overall pattern is so regular: 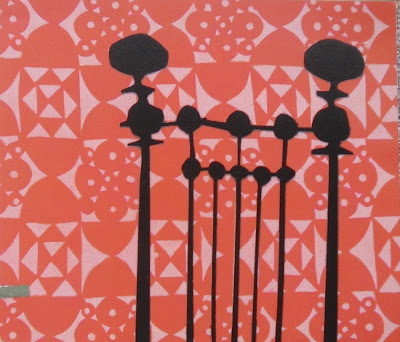 Parallel lines made by sticks and feet and gates:

I love this grid pattern in the mother's dress, and it's not just a color pattern.  If you look closely there's another attribute of shading (solid and striped): 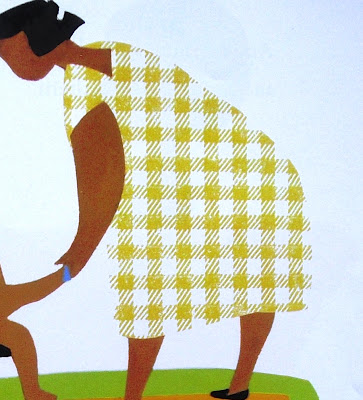 This background is a great example of 'scattered' like in a scatter plot.  Which section has more dots, and which has less?  How do you know: 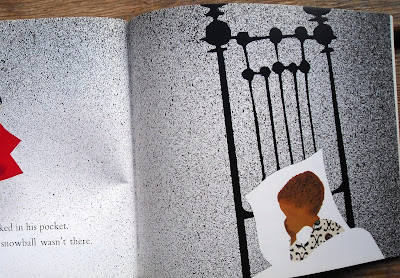 In nature, every snowflake has the same structure yet each one is different from every other snowflake.  That's not exactly the case here.  How many different kinds of snowflakes can you find?  How are they different and how are they the same? 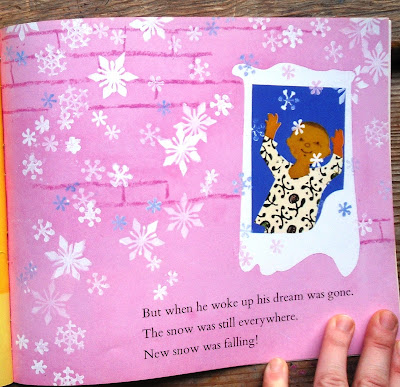 Caps for Sale by Esphyr Slobodkina is another classic picture book and also full of pattern and sequencing.  In my summer work recently, and also from years of work in my residencies, it's clear to me that children don't have enough experience identifying patterns and sequences in different contexts. 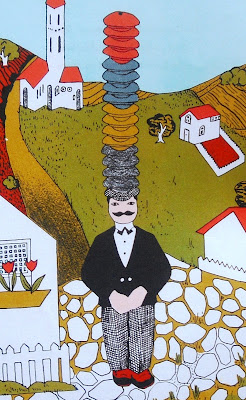 I imagine that none of this is new news, but with my new math eyes if I ever have the opportunity to read this book to a three or four year old again I will probably pause the story after the monkeys throw down all the caps and see if the child can tell me the order the caps should be in when the peddler puts them back on.  And then have fun dressing up with our own hats!

One final book, for now, is our beloved Llama Llama Red Pajama book by Anna Dewdney.  I still remember leaving early one morning for work when my kid was 22 months old and having her look up at me reprovingly and quote the line:  "Llama llama red pajama, waiting waiting for her mama..."  Sniff.

Anyhow, when you first open up the cover you see an incredible variety of painted squares that show up again on little llama's quilt.  Look at all those colors!  And the patterns?  Some are circles some are lines, but there are differences.  Can you tell me what they are? 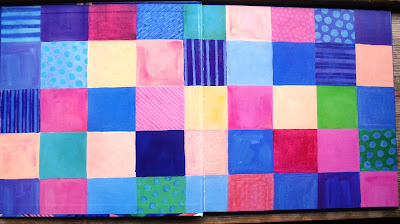 My eye was also drawn to the shapes in the doors, windows and railings within the illustrations.  This story is so engaging that you may not want to interrupt the rhythmic, rhyming flow to discuss this stuff, but...if you're going to make comments about the wonderful illustrations anyhow, a few math themed comments like "Oh, look here!  I just noticed..." would fit in seamlessly.

I think that any time a teacher or parent can share a discovery in the moment with a child or a group of children that there's potential for learning and understanding that might not be available otherwise.  I'm not saying that this approach is better than other approaches to teaching and learning out there, not at all.  But, I think that being in 'discovery mode' is a crucial piece of the learning puzzle.   My own program Math in Your Feet is one example of structured 'discovery' that includes a variety of approaches to learning (discussion, teacher led, student led, observation, writing, directing, group work, individual work, etc.)

So, now I'm curious what other books are out there that have this kind of 'hidden' math?  I just thought of one more book: My daughter listened to the novel Half Magic on CD back in the fall.  The kids find a charm that gives them half their wish, and they quickly learn to wish for twice as much as they want.  It's fabulous.

What other kinds of books have this kind of hidden math?  I'd love to hear your ideas!

p.s.  If it's not already clear, I am not financially involved in any of the books I've mentioned or trying to make money with the use of these images.  This blog is about sharing ideas and thoughts only.
Posted by Malke at 3:14 PM