Summer programming has given me some room to experiment with ideas that have been brewing over the last year.  Ultimately, I designed three new non-dance making activities that reinforced the Math in Your Feet ideas of creating a pattern unit using multiple categories of attributes.  My favorite by far, especially for its flexibility with a range of ages, is this paper patterns activity.

If you've scrolled down already you'll probably be thinking that it looks a lot like a paper quilt activity.  It is, sort of.  What distinguishes it from other paper quilt activities is that there is no pattern to follow, only some guidelines to direct the design process.  Because there's been a day or two at each site this summer where dancing was just not an option -- too hot, too crazy, too distracted by thoughts of swimming after class, whatever -- this quieter activity has been perfect at reflecting and reinforcing the dance work we've been doing on other days.

Just as with the dance work, the individually designed paper pattern unit is made up of four pieces (beats in the dance, squares in the paper design) with choices of various attributes.  The pattern unit is then repeated, or joined with a different design, to make a larger pattern, revealing complexity in combination.  Here's how I introduced the activity at my first summer site: 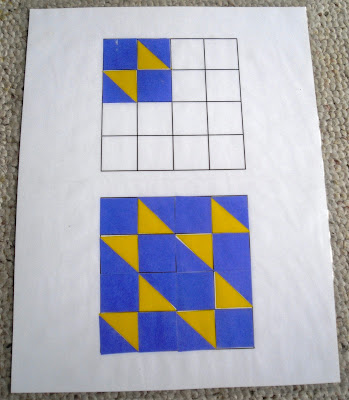 The idea was to experiment with different four-square designs, using a combination of squares and triangles.  At that point the kids would pick their favorite pattern unit and then repeat that favorite four times in the sixteen square grid, as pictured above.

This turned out to be confusing for the kids at the first site.  They were on the younger side (ages seven, eight and nine), most of them emergent or beginning readers.  This, in itself, is a clue as to the importance of an activity like this. A pattern unit is comprised of various smaller parts that make a larger whole.  In math this is called 'chunking' and is a crucial skill for algebra down the line.  If a child has not yet learned to 'chunk' words, they will also most likely benefit mathematically and in their reading from the challenge this activity provides.

Unfortunately, it was a crazy site, and I didn't have the time or the support to help individual children the way I would have liked.  Since this was the first time I had tried the activity, I didn't anticipate some of the issues that came up.  For example, the kids had too many color choices and ended up using all of them.  It was okay to have four, five or six colors in one, four-square design, but when it was time to repeat the pattern unit, it was much too hard for them to slide the design over or down to repeat it in the grid. 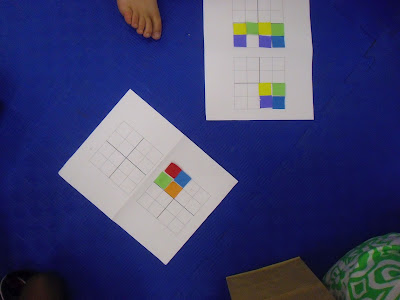 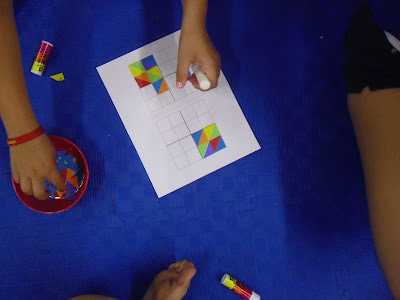 There was some interesting experimentation with the triangles and squares, though, which is always good in my book. 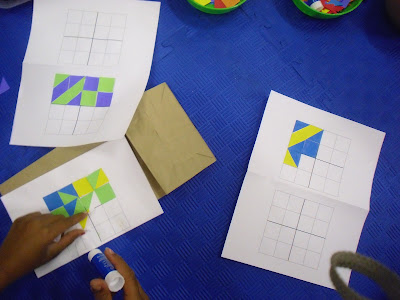 Do you see what I mean about too many colors (design on the left, specifically)? 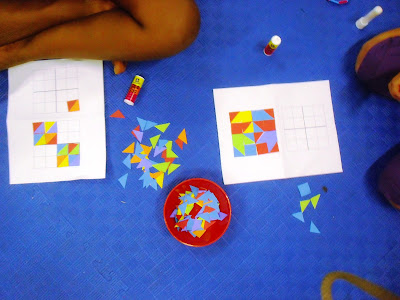 Here are two kids who figured it out: 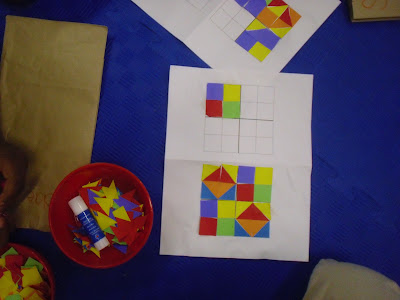 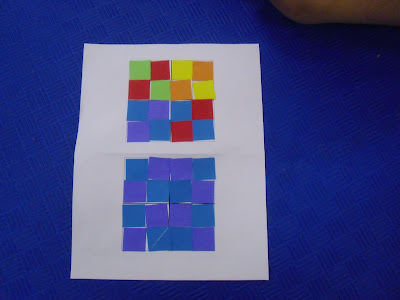 By the time I got to my second site I had adjusted the activity.  I split the sixteen square grid into four smaller, separated parts, and when they had created a design they liked on that sheet I gave them the larger grid. This helped focus kids on the individual unit itself and then make the transition to the larger grid. 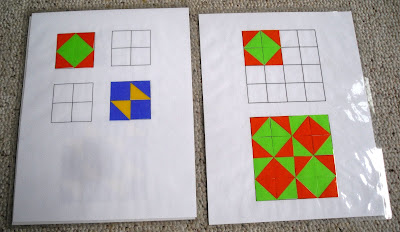 The kids at this site were also older (nine, ten, eleven, even twelve).  This time around I decided to limit it to a choice of two colors which I think helped focus the activity tremendously. 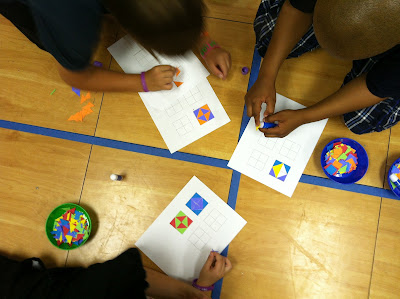 This design is a little out of the box, but it doesn't surprise me as this girl was the only one to use a combination of turns in the dance patterns she created.  Her brain was already 'there' if you know what I mean., 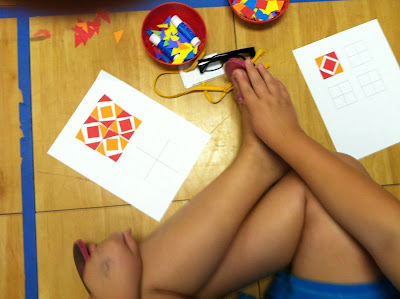 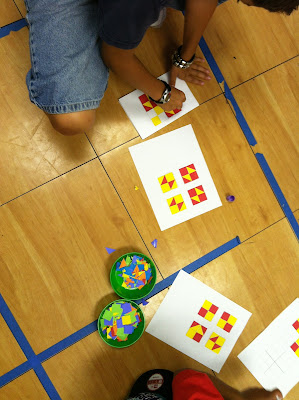 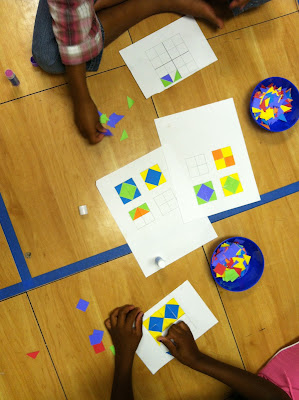 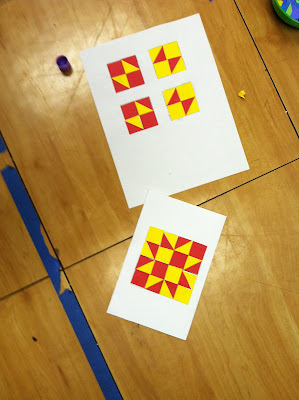 This final picture sums up why I love this activity so much.  Small, simple pattern units get combined to make something surprising, beautiful and mathematically interesting.  The elements of personal choice and action on the design process creates unique results for each child.  Just like in Math in Your Feet.

And the math?  Flips, slides, turns.  An inventory of attributes.  A problem solving process.  Grids.  Patterns. Attending to precision. Just like in Math in Your Feet!

Most importantly, the idea of pattern unit and the concept of chunking is reinforced throughout the entire activity.  And, if they can do it, great!  If they can't, you first and foremost find the beauty in their efforts.  It is this personal work, full of thought and energy, that becomes a self-generated incentive for moving forward to the ultimate goal.  Not only does this activity allow you to celebrate the individual efforts of each child but also makes it easy to immediately assess where the learning points are -- because the evidence is right there in front of you!